Boil them, mash them, stick them in a stew â€¦ potatoes may very well be the most versatile food out there. And, despite their reputation as a “comfort food,” they can be good for you! When grown organically and prepared with healthy ingredients (sans sour cream, cheese, bacon, heavy cream, etc.), potatoes pack a nutritional punch.

In addition, potatoes contain phytonutrients that have antioxidant activity, meaning they work to protect cells from free radical damage. Interestingly, they provide all 22 amino acids that form complete proteins after digestion.

Organic potatoes are definitely the healthy choice. The Environmental Working Group‘s 2015 Shopper’s Guide to Pesticides in Produce lists conventionally grown potatoes in its top 12 (Dirty Dozen) fruits and vegetables on which pesticide residues have been most frequently found. The USDA Pesticide Data Program reports that 35 different pesticides have been found on conventional potatoes, including six carcinogens, twelve hormone disruptors, seven neurotoxins and six reproductive toxins.Â Root vegetables are known for easily absorbing herbicides, pesticides and fungicides from soil.

So, if you want to enjoy the many nutrients and avoid the health risks, choose organically grown potatoes! 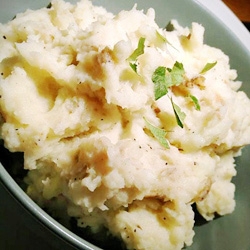 Joy at JoyBauer.com tweaked the recipe for everyone’s favorite comfort food – creamy mashed potatoes – to make it healthier. She combines white potatoes with steamed cauliflower to reduce both calories and carbs, while maintaining a light, fluffy texture. As she explains, “You get all the taste you want without the guilt.”

Cauliflower is an excellent source of vitamin C, with one cup of the cooked vegetable providing almost 55mg or 73% of the recommended daily value, according to World’s Healthiest Foods. The site also indicates that it’s an excellent source of vitamin K (over 17mcg), folate (over 54 mcg), pantothenic acid (.63mg) and vitamin B6 (.21mg). In addition, cauliflower is a very good source of choline, fiber, omega-3 fats, manganese, phosphorus and biotin. It supports the body’s detox system, healthy internal response function and antioxidant system. 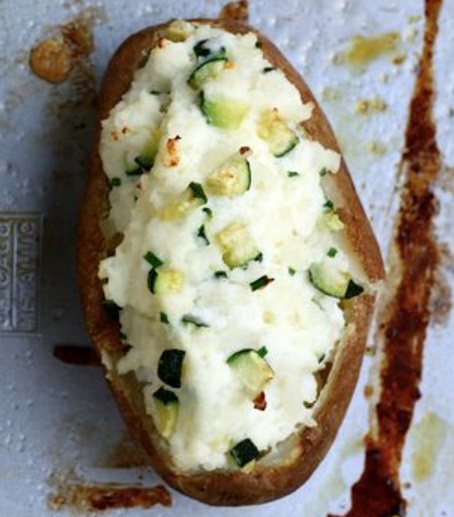 One key ingredient in Adrianna’s recipe is yogurt. Greek yogurt is a great alternative to sour cream as they have similarities in taste and texture, but a dramatic difference in nutrition. Nonfat Greek yogurt has less than a third of the calories, one tenth of the cholesterol and one fortieth of the total fat that is found in regular sour cream.

After baking or microwaving your potatoes, you mash them with Greek yogurt and a splash of almond milk. Next, you add chives and cooked zucchini, mix, place the mixture back in the shells and heat. So simple and delicious! 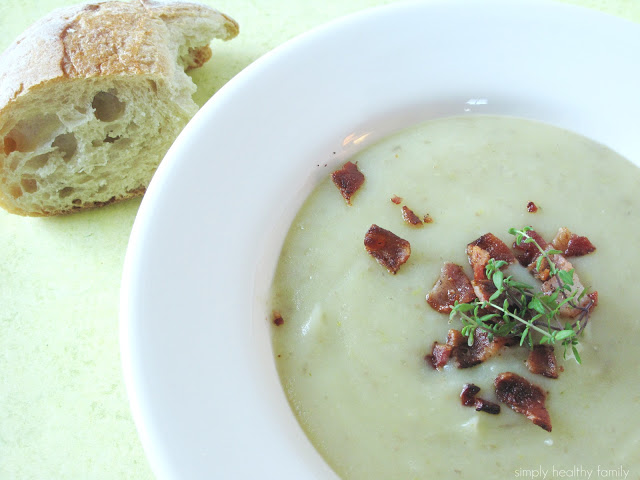 Gwen at Simply Healthy Family was inspired to perfect the usual “starter” potato leek soup recipe in favor of a heartier, more flavorful and healthy version. And, the result is magnificent, as she proudly points out. And others agree! As one commenter raved, “Wow – you have taken potato soup to the next level!”

In her improved recipe, Gwen uses a good organic chicken broth (preferably homemade), adds more leeks and other veggies, and omits the cream in favor of the more flavorful white wine. She says it’s super simple and fairly frugal to make. In addition, “You’ll never miss the butter and cream that sabotage this wonderful soup and your diet.” Enjoy! 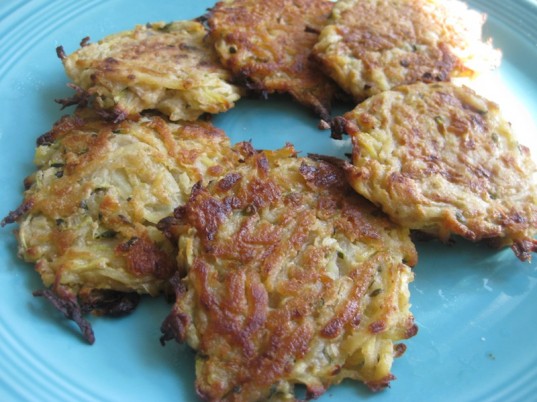 Potato pancakes are a nice diversion from the usual mashed, baked and twice-baked staples. While the fried latkes are tasty, filling and vegetarian-friendly, they are often dripping in oil. So, Marni adapted a favorite baked latke recipe to include zucchini and shares this healthier version on Inhabitots.com.

Marni’s recipe captures all of this goodness, in addition to that of the potatoes. It also includes whole wheat flour, onion, applesauce, nutritional yeast, salt, olive oil and egg replacer. As she points out, potato pancakes are often a kid-friendly favorite. They may also enjoy helping you make them! 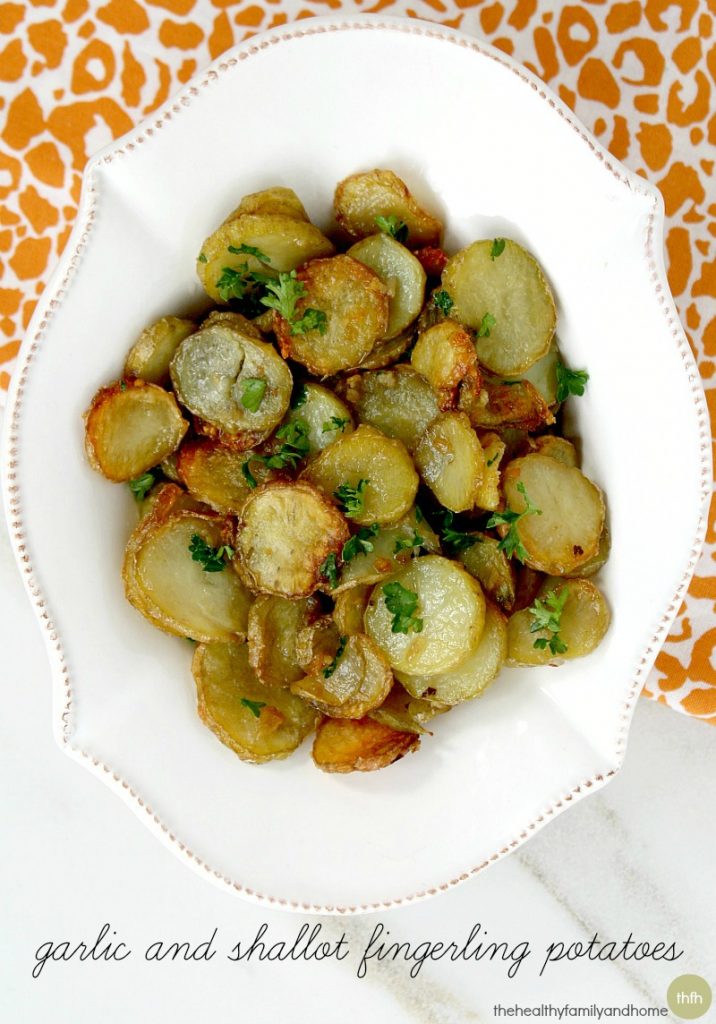 Karielyn at The Healthy Family & Home shares a vegan, gluten-free and paleo-friendly potato recipe that’s easy to make and simply delicious. Her Garlic & Shallot Fingerling Potatoes recipe features a unique type of potato. The fingerling has a buttery, nutty, earthy flavor and is great for pan-frying and roasting, which enhance their robust flavor.

Keeping things simple, Karielyn only uses four other ingredients besides the potatoes: organic coconut oil, organic garlic, organic shallot and Himalayan pink salt. She slices the potatoes, mixes them with the seasoning mixture, places them in a glass baking dish and bakes them for 30 to 40 minutes. Eat them hot from the oven! 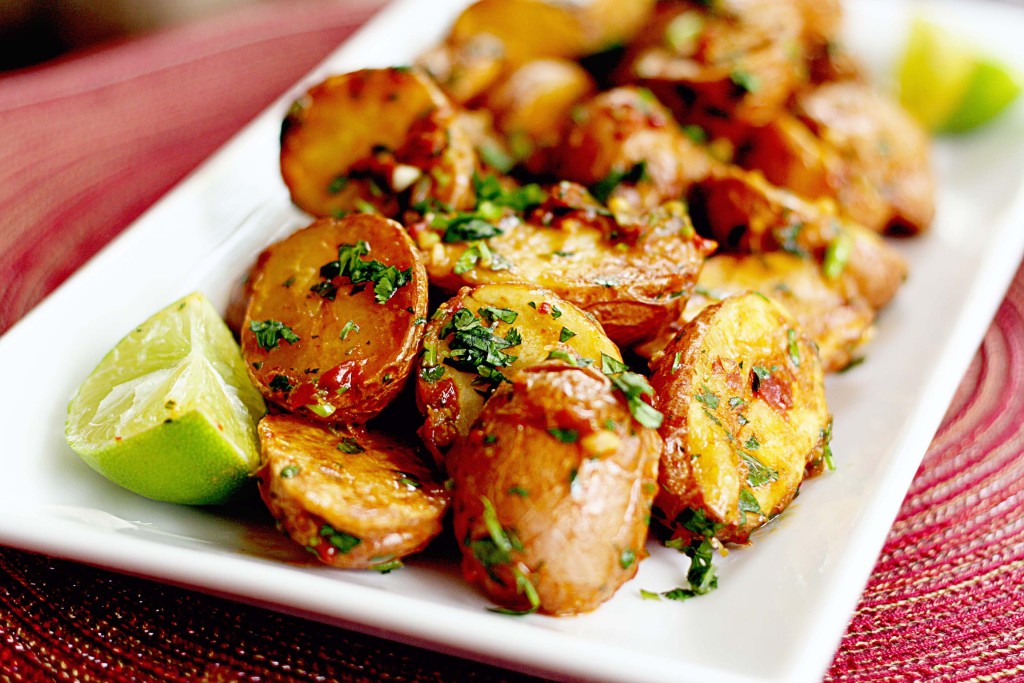 In her family food blog, In Sock Monkey Slippers, Meredith shares her wonderful recipe for roasted potatoes. As she describes, they are “smoky and spicy with a fresh hint of lime.”

With nine simple ingredients, including new potatoes, garlic, lime zest and juice, kosher salt, extra virgin olive oil, cilantro, adobo sauce and chipotle pepper (Meredith points out that chipotle peppers in adobo sauce can be found canned in most major grocery stores), you can whip up a perfect side dish in no time! She also has a great idea for leftovers: “Cook them with some scrambled eggs for an insanely good breakfast.”

So, there are your six ways to enjoy comfort food with less guilt! If you still have a craving for more, check out this video that shows you how to make a healthier option to potato chips at home!

If you have a healthy potato recipe that really hits the spot, please share it with us below in the comments!

To receive great healthy recipes like these as well as other health-related articles directly in your inbox, simply enter your email below.

Is Toxic Nail Polish Disrupting Your Health? New Duke Study Says Yes – But It Doesn’t Have to Be That Way!
4 Ways to Help Students Feel Less Stressed