You are here: Home › Our Blog › Does Your Doctor Shame You About Your Weight?
By Theresa Groskopp, CN on October 4, 2012 in Health Challenges, Nutrition Supplements

Whenever Dr. Oz promotes a weight loss product we’ll have a flood of customers (mostly 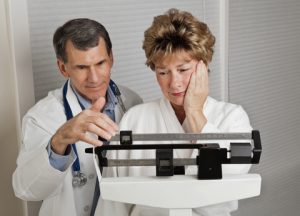 women) in the store looking for a magic bullet to help them lose weight. As we talk with customers, it often comes out that they’ve tried multiple things to lose weight. They’ve joined Weight WatchersÂ multiple times, they exercise, don’t over-eat and they eat healthy…but still they can’t lose weight.

Even worse are the stories we hear of doctors who shame their patients because of their weight. Adding insult to injury, the doctor implies they aren’t self disciplined or trying Â hard enough to shed the pounds.

Many factors can contribute to failed weight loss including but not limited to: hidden thyroid conditions, parasites, a food sensitivity or intolerance, heavy metals or toxin overload. But since mainstream medicine doesn’t always get to the root causes of health problems (it’s much easier to treat the symptoms with a drug!) many people (women in particular) suffer needlessly.

I was very grateful to see this article from Prevention Magazine titled “When Your Doctor Makes You Feel Fat” by Harriet Brown. It has no secret weight loss tip, but if you’ve ever had a bad experience with your doctor regarding your weight, it might bring a little comfort…

Overweight women are often given a biased diagnosis because of appearance. Here’s how to make sure you get the health care–and respect–you deserve.

When Anna Guest-Jelley–26 years old at the time–badly twisted her ankle, the Nashville native went to see her doctor. “Your ankle’s probably swollen,” she said, “because you’re carrying extraÂ weight.”

Guest-Jelley, a yoga teacher, went along with her diagnosis. When the doctor reported that Guest-Jelley’s x-ray didn’t show any fractures, she returned home with instructions to ice her foot–and an all-too-familiar feeling of humiliation at the physician’s focus on her size. “Almost every time I’ve ever gone to a doctor’s appointment, I’ve experienced some level of shaming because of my weight,” she says.

Her experience is shockingly common.

Weight stigma is on the rise in America, according to the Rudd Center for Food Policy and Obesity at Yale University, and, ironically, nowhere is it more deeply rooted than among health care providers.

Multiple studies have found that doctors, med students, nurses, dietitians, and other health care professionals routinely stereotype their heavy patients. In landmark 2003 research from the University of Pennsylvania, for instance, more than half of the 620 primary-care doctors surveyed characterized their obese patients as “awkward,” “unattractive,” “ugly,” and “noncompliant”–the latter meaning that they wouldn’t follow recommendations. More than one-third of the physicians regarded obese individuals as “weak willed,” “sloppy,” and “lazy.”

And it’s women who bear the brunt of this characterization–even when they’re not obese. Doctors’ weight prejudices start when a female patient is as little as 13 pounds overweight–meaning her body mass index would likely be around 27–found a 2007 study from Yale University. (BMI is a measurement that uses a ratio of height to weight to categorize people as being of normal weight [18.5 to 24.9], overweight [25 to 29.9], or obese [30+].) “For men, the bias doesn’t kick in until around a BMI of thirty-five, approximately seventy-five pounds overweight,” says Rebecca Puhl, PhD, director of Research and Weight Initiatives at the Rudd Center. “That’s a definite gender difference.”

If you’re still looking for a little help and wondering what the fat-burning supplements were that Dr. Oz mentioned – they were green coffee bean extract Â with Svetol or GCH (green coffee antioxidant) and raspberry ketones.

Just remember, as you’ll see in this video from the Dr. Oz showÂ on the ketones, the supplement alone won’t do it all and there may be much more involved in shedding those excess pounds. Good luck and don’t let anyone shame you!

Raspberry Ketones: Do They Work?

One Response to Does Your Doctor Shame You About Your Weight?