You are here: Home › Our Blog › Do You Have Excessive Food Cravings? Low-Levels of Dopamine may be the Problem
By Theresa Groskopp, CN on March 5, 2013 in Health Challenges, Health News 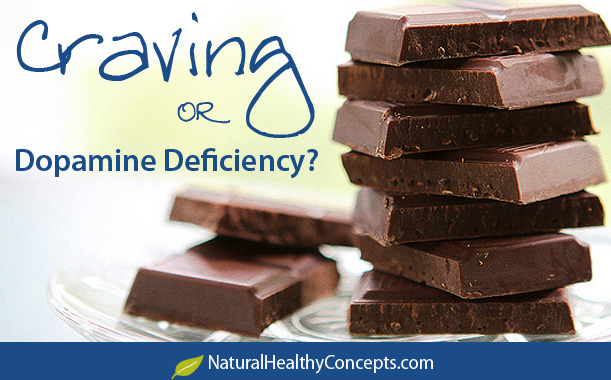 What causes cravings? Research often suggested that cravings were a result of some sort of nutritional deficiency. Women’s Health Magazine published an article suggesting that when we have food cravings, it may be our body’s way of letting us know we’re missing valuable nutrients.

…people in other countries donâ€™t crave the same foods, which indicates a cultural aspect to cravings inconsistent with a simple body nutrient deficiency explanation. Also, it would be much easier to get iron and magnesium from vegetables and fruits, yet most people donâ€™t report craving those things.

But really, how many of us — aside from runners in hot weather — are deficient in salt? And then how do you explain cravings for sweets in terms of deficiency?…..humans rely less on instincts and more on culture to determine what they eat — or on individual experience.

Some of her research has also shown that people have cravings even when they’re fed a dietÂ that’s completely adequate in calories and nutrients.

Natural health enthusiasts would argue that there isÂ differences in the soil ergonomics between different countries and areas; if the soil is depleted of nutrients and minerals, so will the food–which may explain why there is craving differences between areas and countries. Nutritionists have also pointed out that it’s not easier to get iron from fruits and vegetables–and that the easiest source of iron comes from heme, which is found animal protein—something that men (i.e. Steaks) have reported craving.

Other research suggests that cravings are more complex and involve a mix of social, cultural, physiological and psychological factors. An article in the Huffington Post, “Do Food Cravings Indicate Nutritional Deficiency,” Â states that:

What you crave may be steeped in the culture — such as old tropes, like women crave chocolate, or advertising/marketing visuals that command you to “crave” — or it may be based in childhood [and memory]. Very often, people crave the things that soothed them growing up. Â When we eat the foods we crave, we remember that it worked and we may return to that same food the next time we need a fix.

While social and cultural factors certainly play a role in food cravings, new research believes that the root cravings are more psychological, and heavily connected with the interaction of brain neurotransmitters, specifically involved around low-dopamine levels.

Dopamine and the Connection between Cravings

What is dopamine? According to Psychology Today,

While dopamine plays a role in many other important bodily/emotional functions, including mood, sleep, and cognition, dopamine isÂ the primary neurotransmitter found in the brain that is responsible for happiness, pleasure, and reward. Â Brain scans show that when we are craving something, we are activating our brain’s pleasure center; and thus, dopamine is released. Â Our brains are wired in a way that makes us seek out pleasure (whether we realize it or not), and when we eat things like sugar or salty foods, it stimulates the release of dopamine in our brain, which makes us feel pleasure. Our brain recognizes this feeling and likes it, and begins to crave more!

When we experience the release of dopamine, our nature is to seek out more of it and sustain it–and so begins this unconscious drive for pleasure, which tends to lead to excessive cravings and sometimes addiction.Â It may shock you to know that many drugs like heroin and morphine, trigger and stimulate the same receptors in the brain like fatty foods and sugars do–which may explain why many of us crave and are addicted to different things.

The level and amount of cravings is really based on the amount of dopamine you have in your system. Renowned neuroscience researcher Kenneth Â Blum, PHD, believes that:

Individuals with anÂ excessive craving for food and other pleasureÂ satisfying substances andÂ activities,Â dopamine deficiencyÂ is usuallyÂ the culprit andÂ due to an associationÂ with the dopamine D2 receptor gene (DRD2) A1 allele and otherÂ polymorphisms (gene variations) involved in the brain reward cascade.

When dopamine and other “feel good” neurotransmitter chemicals are low or blocked from the brain’s receptors by genetic or environmental influences; stress, pain, discomfort and agitation are the result–which people often associate with dopamine and serotonin deficiency.Â Dr. Kenneth Blum has published many studies on Reward Deficiency Syndrome, which is what he’s referencing about with the dopamine D2 receptor gene in the quotes above. While I will not dig further into theÂ scientificÂ explanation of things, his research offers some great insight on the psychological science of the brain when it comes to cravings and addiction.

Studies are also pointing out that these cravings, and our constant drive to feel pleasure contributes to the depletion of dopamine receptors in our brain. An article from the Wall Street Journal points out:

Brain researchers have documented that when people continually bombard their reward circuits with drugs, alcohol or high-fat, high-sugar foods, many of the dopamine receptors in the system shut down to prevent overload. And with fewer dopamine receptors at work, the system craves more and more, insatiably.

So in short, if you continually stuff your face with the fatty foods and sugars, you’ll tend to overeat, and it’ll take more and more food for you to feel satisfied–thus leading to weight gain. This dopamine depletion leads to an increase in the very same feelings that caused the overeating in the first place!Â A study conducted in 2009 by theÂ Oregon Research Institute and University of Oregon,Â also showed that women with low-dopamine levels had an increased risk for weight gain, than those who had normal dopamine levels.

Research suggests that there are certain amino acids and other nutraceuticals that can be used to boost the brainâ€™s ability to increase or decrease certain neurotransmitters–like dopamine. So the whole argument that nutrition is not linked to cravings is not entirely true, especially when many foods and nutrients contribute to the production ofÂ chemicals(like dopamine)Â that stimulate the brain and its receptors–which most likely influences our cravings.Â Natural News suggests eating foods such as red beets, apples, bananas, green vegetables, cauliflower, poultry and more to help maintain proper levels of dopamine:

Â· Proteins are high in amino acids which contribute to the production of chemicals that stimulate dopamine in the brain. Foods such as eggs, fish, poultry and red meats are all high in protein and great for increasing metabolism. Fish in particular, is high in protein and contains healthy Omega 3 fatty acids, which contribute to increased brain function. The best proteins are those that are organic and do not contain antibiotics, hormones or pesticides.

Â· Red beets restore dopamine levels and produce a sense of well being. Beets contain the amino acid betaine, which acts like an antidepressant, creating feelings of pleasure and joy.

Â· Drink a daily dose of watermelon juice, which is high in vitamin B-6, an important nutrient for dopamine production

There are also many natural substances that help support the release of dopamine and dopamine synthesis including L-Phenylalanine, N-Acetyl L-Tyrosine, and vitaminB-6. Some of our top selling supplements that may help support healthy dopamine levels include:

Â More Sources for this article include:

3 Responses to Do You Have Excessive Food Cravings? Low-Levels of Dopamine may be the Problem