You are here: Home › Our Blog › Did You Know Fever is Our Friend? Why Your Child’s Fever Should Be Left Untreated
By Ashley Steinbrinck on October 24, 2013 in Health Tips, Parenting 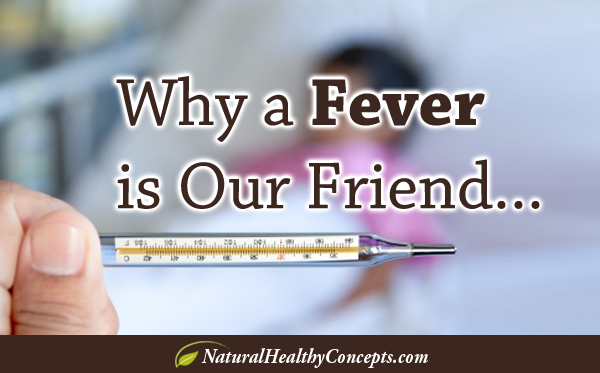 “A doctor or parent who worries about bringing down a fever is like a fireman who tries to turn off the fire alarm rather than fight the fire. ~ Dr. Risley

When your child has a fever, there’s no need to give him acetaminophen, aspirin or ibuprofen — just let the fever do its job!Â It’s time to conquer “Fever Phobia!”

At last – treating fevers is a topic that both medical sides (conventional medicine vs natural medicine) actually agree upon.Â A fever is a blessing in disguise. It means your child’s body has an active immune system and is working to fight off the infection. In fact, treating a fever with medication can even prolong your child’s sickness and cause serious side effects.

Matthew Kluger, is a researcher who demonstrated that fever is beneficial when he infected desert iguanas with bacteria. He proved that it can improve the immune response to infection and even mild fevers can have a number of important immunological functions that allow us to better fight bacterial and viral infections.

Dr. Joseph Mercola says, “Lowering a fever is not only unnecessary, it could actually hamper your child’s recovery process, prolonging the illness rather than resolving it more quickly.Â Remember that a fever is not something to fear. There is good evidence that fever actually serves as a healthy stimulus to develop a strong immune system and typically the higher the fever the better the stimulus. Something like lifting weights in which heavier weights typically produce more muscle growth.”

The American Academy of Pediatrics, states, “A fever is usually caused by infections from viruses (such as a cold or the flu) or bacteria (such as strep throat or some ear infections). The fever itself is not the disease, only a sign that the bodyâ€™s defenses are trying to fight an infection.” The Academy also states, “Fevers generally do not need to be treated with medication unless your child is uncomfortable or has a history of febrile convulsions. The fever may be important in helping your child fight the infection.Â Even higher temperatures are not in themselves dangerous or significant unless your child has a history of seizures or a chronic disease.”

I’m sure Big Pharma would love to disagree with the facts on this one, and instead tell us to give our kids pain/fever reducers every 3-4 hours. Because if we don’t, pharmaceutical profits may be in trouble! Who cares if acetaminophen is the nation’s leading cause of sudden liver failure,Â we need to depopulate somehow – right, Bill Gates?

According to the Centers for Disease Control and Prevention (CDC) and the Food and Drug Administration (FDA), acetaminophen overdoses send 55,000 – to 80,000 people to the emergency room each year and kill at least 500 people in the United States alone. (Source)

Parents wouldn’t give a drug to their children if they knew it wasn’t necessary, slowed down their recovery time and had harmful health risks, right? Let’s hope so. There actuallyÂ is a good explanation for why parents are so quick to call a doctor or treat their child’s fever with medication. In two words — “Fever Phobia.”

An abstract from The National Center for Biotechnology Information (NCBI)Â explains,

“FeverÂ is one of the most common reasons that parents seek medical attention for their children. Parental concerns arise in part because of the belief thatÂ feverÂ is a disease rather than a symptom or sign of illness. Twenty years ago, Barton Schmitt, MD, found that parents had numerous misconceptions aboutÂ fever. These unrealistic concerns were termed ‘feverÂ phobia.'”

Twenty years later, researchers conclude that fever phobia persists with 91% of caregivers still believing that a fever can cause harmful effects. But, why do parents have such misconceptions about fever in the first place? It just so happens that studies have found “fever phobia” developed as a result of incomplete, inconsistent and even incorrect information from pediatricians.

In the early 1990â€™s, May and Bauchner looked into the role pediatricians played in fostering the development of fever phobia. They discovered “65% of pediatricians believed that fever could be dangerous with 21% listing brain damage as a potential complication. Just over a quarter of them listed death as a possible result of the fever itself, not the disease actually causing the fever.”

The same article from Science Based Medicine states that,

“In 2000, Mayoral et all publishedÂ survey resultsÂ in Pediatrics revealing that nearly a decade later pediatricians still commonly held false beliefs about fever and its management. 50% of the respondents recommended alternating antipyretics for instance. This generally meant giving acetaminophen and ibuprofen three hours apart, typically scheduling them until the child has recovered from the illness in order to prevent fever rather than just using them as fever occurs. Nearly a third of the pediatricians in the survey cited a nonexistent policy of the American Academy of Pediatrics (AAP) as support of the practice. The AAP actually strongly recommends against such an approach to fever.”

The actual journal abstract from NCBI concludes, “Acetaminophen and ibuprofen are commonly being used in an alternating manner for management of fever. There is presently no scientific evidence that this combination is safe or achieves faster antipyresis than either agent alone. There is evidence that the improper use of these agents may cause harm. Despite 29% of participants citing American Academy of Pediatrics recommendations as the basis for fever management, no such policy or recommendations exist. The observation that this practice is more common in younger practitioners may reflect their continued anxiety about fever (fever phobia). Until properly controlled studies have assessed the risk of combining these 2 products, practitioners should proceed with caution.

Furthermore, our “quick to medicate” approach to illness may have become more popular as drugÂ development and sales really started booming in the 1970s.

Sarah from The Healthy Home Economist makes a great point about this in regards to fever. In her article, Got a Fever? Skipping the Meds Has ALWAYS Been the Best Policy, she explains —

“Prior to the advent of the American obsession with all things pharmaceutically produced, which began to gather momentum in the 1970?s, doctors routinely recommended against treating the fevers of healthy children. My own Father, a retired MD who specialized in Family Practice, never brought down fevers in his own children nor did he suggest doing so to his patients even in cases where the fevers were rather high at 105 F.Â Why? Because doing so would prolong the illness, of course! Simple common sense medicine for normal, healthy children.”

With that said. Let’s start thinking of a fever as a friend, rather than our enemy. The fever is there to help, so the worst thing to do is turn it away.

Should Fever Ever be a Concern?

The vast majority of children that come down with a fever are fighting an infection that will go away on its own within a few days (with the fever’s help of course). But, there are a few instances when fever can be the clue for a more serious underlying issue. These instances include:

Natural Ways to Comfort Your Child With a Fever

Fluids – Your child should drink plenty of liquids to preventÂ dehydration

Electrolyte Replacement -Â If your child is vomiting or has diarrhea, Â it may be beneficial to add electrolytes to his/her drink

UN-Bundle – It’s a good idea to take your child’s socks off and make sure he/she is not wrapped up in too many blankets or layers of clothing. This could interfere with normal body temperature regulation and even lead to heat exhaustion or heat stroke.

Rest – Many times children with a fever still eat, play and seem happy! But, if they are tired let them rest and make sure they are getting their proper amount of sleep to help their body repair itself.

As a young mom myself, I’ll admit I’ve had my fair share of “fever phobia.” I’ve called the doctor late at night (50% of calls after hours are due to fever) and I’ve given my babies Tylenol to help bring the fever down. I’m just glad I’ve done my research on the topic and conquered my fever phobia! Now I have a positive feeling when my child strikes a temperature. I’m glad he has a healthy immune system that works. Thank God for that!

What are your thoughts about fever treatment? Have you ever called on a doctor in the wee hours of the night because you were scared that your child had a fever? Tell us your story!

Don’t forget to like Natural Healthy Concepts on Facebook for more natural health info and subscribe to our blog for free at the top right of the homepage so you don’t miss an article!

The Reality of Prescription Medication – Abuse vs Necessity
The truth about SAD – it isn’t winter blahs or cabin fever!

One Response to Did You Know Fever is Our Friend? Why Your Child’s Fever Should Be Left Untreated