You are here: Home › Our Blog › The Deanna Protocol – Hope and Help for People Battling ALS
By Theresa Groskopp, CN on April 1, 2014 in Health News 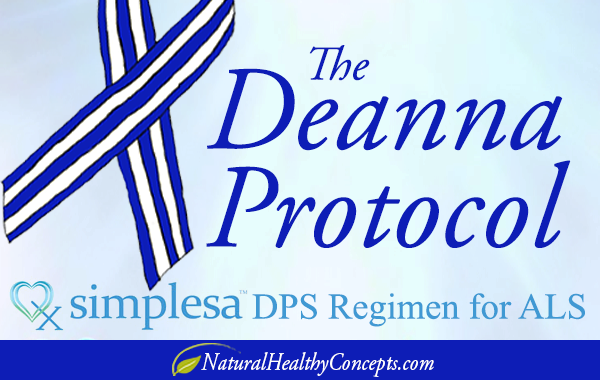 How would you feel if your child came down with an incurable disease – one which would force you to watch her waste away in a matter of years?

Dr. Tedone, a retired orthopedic surgeon, was unsatisfied with the treatments and opinions traditional medicine offered his daughter. He began looking into the disease himself using his daughter to test out nutrients and naturally-occurring chemicals that seemed to help.

In around half of all cases, ALS patients have fewer than five years to live. So Tedone needed to work quickly.

After extensive research and experimentation – Dr. Tedone developed a treatment involving a regimen of commercially available dietary supplements, an exercise routine and massage therapy. He says this system slowed and possibly stopped the progression of his daughter’s ALS.

Tedone calls this treatment the Deanna Protocol – after his daughter. This process was developed specifically for Deanna, yet other ALS patients are also finding success.

It is not a cure. But the results so far have been promising and provide hope for those fighting ALS. At the very least – it seems the Deanna Protocol can extend the lives and improve the quality of life of people with this debilitating disease.

When a story about the Deanna Protocol first appeared on CBN in November of 2012, more people became aware and started asking questions about the experimental therapy.

What is ALS or Lou Gehrig’s Disease?

ALS stands for amyotrophic lateral sclerosis. It is also known as MND orÂ motor neuron disease in the UK and Australia.

In America, it is often referred to as Lou Gehrig’s disease in recognition of the legendary New York Yankees baseball player who was diagnosed with ALS.

The disorder essentially means that muscles in the body lose nourishment and begin to atrophy – or gradually become weaker and smaller.

ALS specifically impacts the neuromuscular system, which is the connection between muscles, the brain and the spinal cord.

ALS causes damage to motor neurons in the brain and spine.

The brain uses these neurotransmitters as chemical messengers to tell muscles when to move. As these motor neurons disappear from the body, a person can become paralyzed and will eventually die.

Keep in mind that ALS affects all muscles – including vocal cords, the lungs and the heart. That means a patient’s ability to speak, breathe and swallow become impaired. This is why patients with advanced ALSÂ  often need things like feeding tubes and ventilators. As muscles waste away, they can no longer breath or the heart stops working.

The Deanna Protocol and How it Works

Dr. Tedone compares the Deana Protocol to the way we treat Type 1 diabetics – those who are dependent on insulin. Doctors provide patients with the insulin a diabetic’s body can no longer provide.

In a video in which Tedone explains his treatment in depth (watch the video at the end of this article), he lists three health issues that doctors agree can be identified in people with ALS and many other neuro-degenerative diseases.

The goal of the Deanna Protocol is to address these issues using a complex program involving an exercise routine, massage with coconut oil and a regimen of 27 different nutritional supplements.

Dr. Tedone identifies four of these supplements as being the most important:

AKG seems to be the most crucial of all. It is produced in the Krebs Cycle or citric acid cycle. This is how our bodies – and anything that requires oxygen to live – create energy for cells.

AKG supplements are often used to avoid muscle breakdown during exercise, as well as to aid in recovery after a surgical procedure. L-arginine (the extra A in AAKG) is an amino acid that seems to increase blood flow to the muscles.

GABA or Gamma-aminobutyric acid, is an inhibitory neurotransmitter that may help the body break down excess glutamate while also playing a role as an antioxidant and free radical scavenger. Research indicates ALS patients have an elevated level of oxidative damage in the brain and spinal cord.

Other supplements in the Deanna Protocol are also chosen for theirÂ antioxidant potential as well as their role in the Krebs cycle.

In addition to dietary supplementation, Dr. Tedone recommends a moderate workout routine for ALS patients involving resistance training, aerobic exercise, stretching and range of motion exercises. Plus, patients undergo massage therapy with coconut oil. The coconut oil contains medium chain triglycerides (MCTs), which Tedone says are small enough to be absorbed through the skin by mitochondria in the cells of muscles.

In that article, a table displays the supplement regimen Tedone requires for the original Deanna Protocol. It involves dozens of supplements, some of which need to be taken multiple times per day.

The complexity of the protocol can cause some patients to have a hard time following it. That’s especially true for those who may have difficulty swallowing pills because of their condition.

But as the Deanna Protocol has become more well-known, others have developed a way to simplify the routine. That includes nutritional supplement manufacturer Simplesa.

In February of 2014, Simplesa released what it calls the Degenerative Protocol Spectrum (DPS). It is based on Dr. Vincent Tedone’s original Deanna Protocol, but makes it easier to follow.

Instead of many different supplements, Simplesa combines the 27 nutrients of the protocol into seven products along with an easy-to-follow schedule. Plus, instead of capsules, the supplements are provided in liquid or powder form – making it much easier for ALS patients to ingest, while potentially making the nutrients more bioavailable.

It is important to note that evidence related to the success of both the Deanna Protocol and Simplesa’s Degenerative Protocol Spectrum is still considered anecdotal. That simply means that we’re relying on the testimonials of people with ALS, and scientific data/proof is unavailable.

But more research is underway…

As mentioned in the CBN report, Dr. Dominic D’agostino and his colleagues at the University of South Florida have been testing elements of the Deanna Protocol in mice with ALS.

It’s also important to realize that ALS is a complicated condition that manifests itself in different people in different ways. Results may not be the same in every patient, or the protocol may need to be adjusted.

But the bottom line is that this is a sign of hope for those battling Lou Gehrig’s disease.

It can take months to receive a diagnosis of ALS. That’s why Dr. Tedone strongly recommends that anyone waiting for a diagnosis on a possible neurodegenerative disease begin the Deanna Protocol treatment – as a preventative measure – as soon as possible.

He believes that doing so could help save cells and slow progression. Even if the final diagnosis is not ALS, Tedone claims “treatment with AKG will do no harm.”

For more on the Deanna Protocol, including the latest news and support forums, visit Dr. Tedone’s site Winning the Fight. The organization is an all-volunteer non-profit supported by donors around the world. Winning the Fight is dedicated to raising awareness and supporting research of neurodegenerative disease.