You are here: Home › Our Blog › Are Crickets the New Nutrition Trend?
By Leslie Benson on February 27, 2017 in Diet, Health Tips 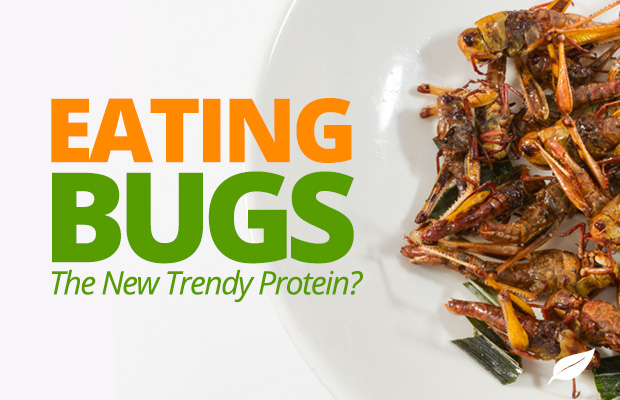 Edible insects may be good for your health. Learn how crickets could help you build lean muscle and more.

Food phobias may keep some Westerners from eating bugs, but in many otherÂ cultures, eating insects such as crickets is a common practice. If you can get over the “ick” factor of stuffing a crunchy creepy crawler in your mouth, there are many potential benefits to eating insects that may support good health. (Not to mention, theyâ€™re considered a sustainable, eco-friendly form of food.) Protein-packed crickets, for instance, may help you build lean muscle. Learn more abut the pros and cons of this nutrition trend in this blog.

Usually, protein bars contain granola, nuts or grains. You wouldnâ€™t expect to see your favorite energy bar packed with crickets, but thatâ€™s just what youâ€™ll find in some snack foods. On the market today, youâ€™ll even find cricket alternatives to beer nuts, baking flour and burgers.

Ounce for ounce, crickets have twice the protein (containing all nine essential amino acids), three times more iron, and five times as much magnesium than beef. Thatâ€™s one of many reasons why natural health advocates are encouraging people to try incorporating cricket-enriched foods into their diet. [Source]

Of the 1.1 million species of insects scientists have identified, 1,700 are edible. Eighty percent of the worldâ€™s population eats insects as a regular part of their diet, a practice known as entomophagy. People in Africa, Asia, and Latin America consume insects regularly. Crickets in particular areÂ described as having a subtle, nutty flavorâ€”perfect for eating whole, in fried rice, in tacos, when dipped in chocolate or sprinkled with your favorite seasoning.

But why the hesitation by Americans to dive into the insect craze? For many people, the unusual texture and taste has an emotional hold on them, driving irrational fears. However, those with an international palate have been known to go outside of their comfort zones to try something newâ€”that could even be good for you!

To help Americans ease into the trend, edible-insect advocates have been avidly promoting the idea that insects can help solve food and protein shortages at food stations in San Francisco, California, and in Bozeman, Montana, to name a few. [Source]

Unlike large farm animals, insects are ingested whole, including the bones and organs, which deliver calcium, iron, vitamin B12 and zinc. PBS Newshour reports, â€œa six-ounce serving of crickets has 60 percent less saturated fat and twice as much vitamin B12 than the same amount of ground beef.â€ They also contain about 65% proteinâ€”not too shabby for an insect about the size of a quarter. Here are more reasons crickets may be a good source of nutrients for overall health and wellbeing.

The Appeal of Cricket Farming

Many people believe that contemporary agriculture is unsustainable. Thatâ€™s why cricket farming may be a better option. Itâ€™s environmentally responsible, because unlike livestock farms that largely contribute to environmental pollution, cricket farms create a fraction of greenhouse gases. Crickets also grow quickly, only taking seven weeks to reach adulthood, unlike the two years it takes for cattle to grow. In addition, crickets take up very little space and use very little water, which makes cricket farming an ideal alternative to livestock farming. [Source]

In addition, according to a U.N. Food and Agriculture Organization report titled â€œEdible Insects,â€ insect-eating may help fight world hunger by feeding the 9 billion people that will live on earth in 2050.

What the Critics Are Saying

However, not everyone is on board with the idea that eating insects provides adequate protein for human beings. A study published in the journal PLOS ONE found that the amount of protein in crickets could be lower than expected and depends highly on their diets, ranging from corn-, soy-, grain-, food waste- or crop residue-based feed. The study reports: â€œCompared to the industrial-scale production of chickens, crickets fed a poultry feed diet showed little improvement in protein conversion efficiency, a key metric in determining the ecological footprint of grain-based livestock protein.â€

Dr. Mark Lundy of the University of California Division of Agriculture and Natural Resources summarizes the findings. â€œSwapping chickens for cricketsâ€“while feeding them the same thingâ€”is unlikely to make a real difference. Insect cultivation is more likely to contribute to human nutrition at a scale of economic and ecological significance if it does not rely on a diet that competes with conventional livestock, but more innovation is needed for this to become a reality.â€

Other Bugs on the Menu

To some, crickets may be a gateway bug. Next on the menu could be waxworms, tree worms, beetles and stinkbugs, which are already common cooking ingredients in other countries for their unique flavors and nutritional value (including protein, fiber, healthy fats and important minerals). In a previous blog, we examined other creepy things that may be good for you.

But if youâ€™re afraid of eating bugs or practice a vegan lifestyle, there are manyÂ plant-based proteins to meet your nutritional needs. Browse the wide selection at Natural Healthy Concepts to find other sustainable, natural protein options, including from brands like Vega One, Garden of Life and Sunwarrior.

Would you try a cricket protein bar? Have you ever eaten a bug? Share your thoughts in the comments below!

What Is Herbal Tea and What Are Its Benefits?
Fiber and the Microbiome: What’s the Connection?

One Response to Are Crickets the New Nutrition Trend?