You are here: Home › Our Blog › 3 Reasons to Try Cordyceps Coffee
By Theresa Groskopp, CN on June 21, 2018 in Diet, Health News, Health Tips 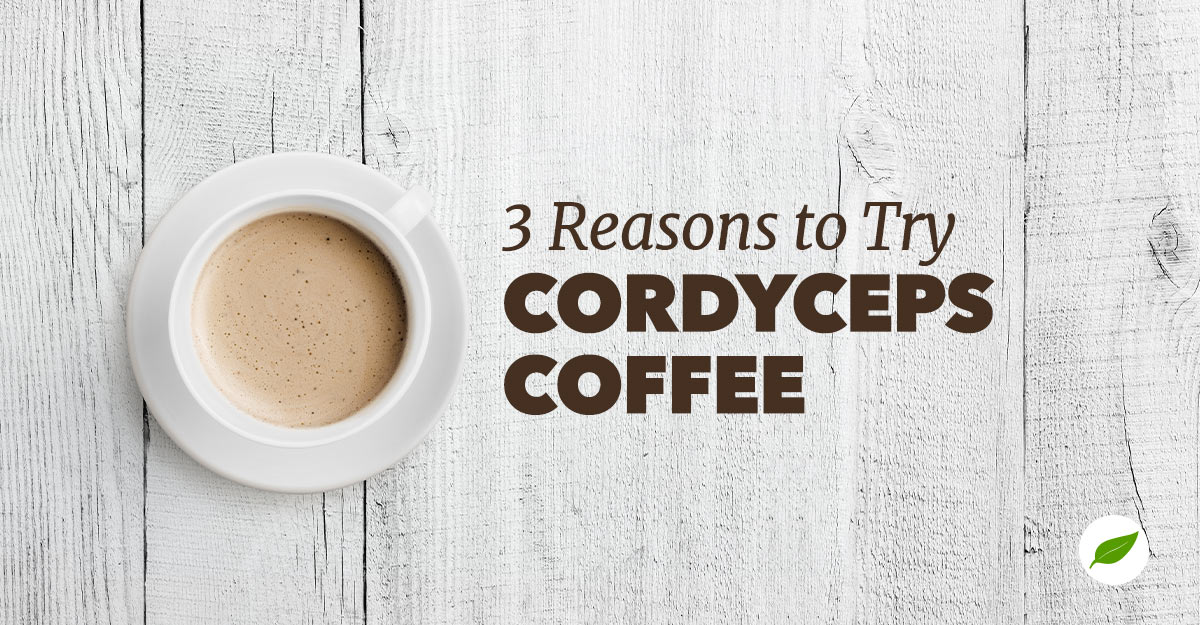 Did you know? Cordyceps coffee may benefit your health.

If youâ€™re like most Americans, you probably turn to a cup of coffee or even drink energy drinks each morning to jumpstart your day. Thereâ€™s nothing wrong with a warm mug of coffee each morning to percolate your thoughts, but ask yourself this: do you keep turning to coffee throughout the day for needed energy and motivation? If so, youâ€™ll be happy to hear that thereâ€™s another beverage that can help you sustain energy and avoid the afternoon slump. It comes from an exotic, mountain-grown mushroom known as cordyceps. Whether youâ€™re intrigued or skeptical about the potential benefits of mushroom coffee, read on to learn more how cordyceps coffee can help support natural energy for long distance runs, spin classes and much more.

Cordyceps is the name used for a family over 500 mushrooms that grow in high altitude areas of China and the Himalayan mountains. These invasive fungi actually begin their lives on the backs of unsuspecting caterpillars. Eventually, the cordyceps mushroom takes over and plants itself into the ground where it grows and thrives, ending the life of the caterpillar. Research into cordyceps has revealed that there are upwards of 20 bioactive ingredients found in cordyceps which stimulate and promote health in specific areas of the body. Here are three reasons to try cordyceps coffee.

It is an Adaptogen & Promotes a Healthy Response to Stress
If youâ€™re not familiar with the word adaptogen, let us break it down: According to Merriam Webster, an adaptogen is â€œa nontoxic substance and especially a plant extract that is held to increase the body’s ability to resist the damaging effects of stress and promote or restore normal physiological functioning.â€ Some believe that using the cordyceps mushroom in a warm brew such as coffee or tea may increase the adaptogenic properties of the fungus.

Cordyceps Has a Rich History of Health and Wellness
Tibetan anecdotes tell us that cordyceps was discovered by Yak herdsmen who saw an increase in the vigor of their livestock after they grazed on the cordyceps mushroom. They began to harvest it and research its potential benefits. They discovered that in addition to natural energy, cordyceps promotes blood balance, liver health, healthy sexual performance, and restful sleep.

Promotes Natural Energy
Although cordyceps has been used for thousands of years in Eastern medicine, itâ€™s only now gaining in popularity in the United States. Some say its surge began in 1993 when three female Chinese runners shattered world records in short distance running and attributed their speed and power to cordyceps. Because of their performance, cordyceps immediately caught the eye of athletes as a natural way to enhance their performance. Today, cordyceps drinks such as cordyceps coffee and tea can be found in trendy health cafes and coffee shops across the globe as patrons seek a newer, more natural way to fuel their busy lifestyles.

Are You Ready To Give Cordyceps a Try?

Cordyceps coffee is often a blend of the cordyceps mushroom, blended with instant coffee grounds for a coffee-like experience. If you’re interested in the potential benefits of cordyceps coffee, you may also enjoy other cordyceps products as well. Shop Natural Healthy Concepts for cordyceps supplements to support your natural health journey! Try Mushrooms + Herbs Cordyceps+ from Gaia, a convenient vegan supplement that supports energy and stress relief, or try Cordyceps from Oregonâ€™s Wild Harvest, an organic, non-GMO dietary supplement available in easy-to-swallow veggie capsules for endurance and energy support.

Have you tried cordyceps coffee for yourself? Tell us about your experience below.

What is Cordyceps and Why Should You Try It?
Try Cordyceps Powder for Energy and Stamina