You are here: Home › Our Blog › Cloves: Tiny Herbs with Huge Health Benefits
By Jackie Peters on May 25, 2015 in Health News 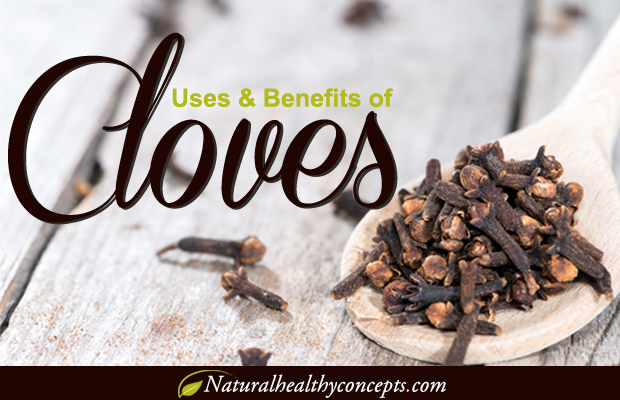 The aroma of cloves often sparks memories of holiday ham, mulled wine or a favorite perfume. This unique scent is described as â€œpowerful, sweet-spicy and hot with fruity top tones.â€ Its strong taste is explained as â€œuniquely warm, sweet and aromatic.â€

The clove spice is made from the unopened pink flower buds of the Syzgium aromaticum tree, an evergreen that grows in tropical and subtropical conditions. This tree is native to the Maluku Islands (the Spice Islands) in Indonesia. Today, the top five leading producers of cloves include Indonesia, Madagascar, Zanzibar, India and Sri Lanka.

After being picked by hand, cloves, which resemble tiny nails, are dried until they turn brown. They then have a hard exterior. Their flesh has an oily compound that gives them their nutritional and flavor profile, according to The Worldâ€™s Healthiest Foods.

The use of cloves has been dated back to around 1721 BC. Then, during the Han Dynasty, a Chinese leader demanded that those who addressed him must chew cloves to freshen their breath. Later, during the Middle Ages, cloves started to be heavily traded. There were actually wars over cloves in the 13th and 14th centuries!

Today, the clove spice is used around the world, especially in Asian cuisines. Ground cloves are also used with cinnamon to spice up things like baked goods, squash, fruit pies, sweet potato and pumpkin. Indonesia, India and Pakistan are some of the largest consumers.

It is best to buy whole cloves, as powdered lose flavor faster. It is estimated that the powdered form lasts six months, while whole cloves last one year, and longer if refrigerated. 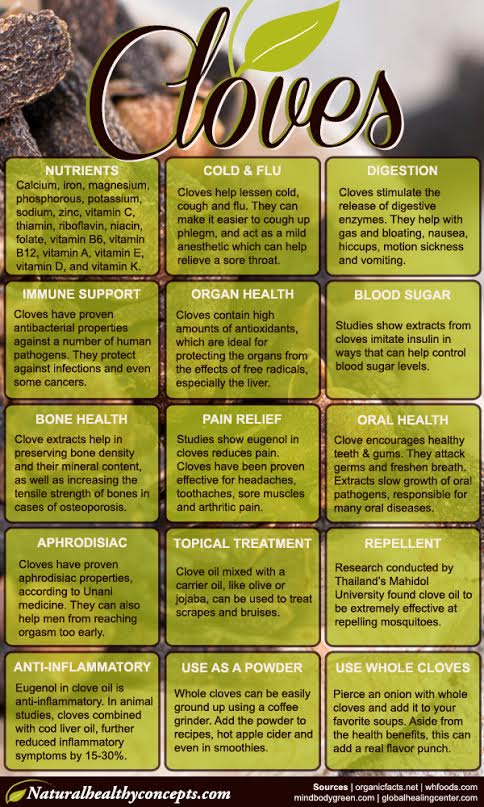 Cloves areÂ said to have the richest antioxidant source of all spices. In addition, they containÂ minerals, vitamins, omega-3s and other nutrients.

As The Worldâ€™s Healthiest Foods explains, â€œClove’s unique phytonutrient components are accompanied by an incredible variety of traditionally recognized nutrients.â€ On their nutrient ranking system, cloves are noted to be an excellent source of manganese, a very good source of vitamin K and dietary fiber, and a good source of iron, magnesium and calcium. (Source)

The main constituent of clove is eugenol, which functions as an anti-inflammatory substance. In addition, itÂ contains other biochemicals that â€œhave been reported to possess various properties, including antioxidant, hepato-protective, anti-microbia and anti-inflammatory properties.â€ These bioactive compounds include flavonoids, hexane, methylene chloride, ethanol, thymol and benzene. (Source)

Some of the many potential health benefits of cloves are as follows:

In aromatherapy, clove oilâ€™s profile shows it can be used as an antiseptic and pain reliever.

Learn to make your own clove oil for a toothache here!

Do you use cloves to spice up a recipe? Were you aware of the numerous potential health benefits of cloves? Weâ€™d love to hear from you!