You are here: Home › Our Blog › The 3 Biggest Myths About Cholesterol
By Ashley Steinbrinck on February 29, 2012 in Nutrition Politics 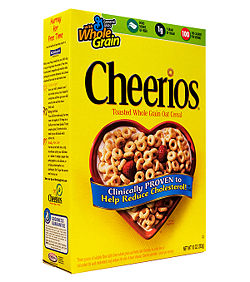 You’ve probably often heard how bad it is for you to have high cholesterol.

We see TV commercials advertising drugs that are proven to lower your cholesterol. We go to the grocery store and see products that claim to be low in cholesterol or that will bring your cholesterol levels down. Even good old Cheerios has hopped on the reduce your cholesterol, heart-healthy band wagon.

For decades, we’ve been thinking heart disease is a matter of cholesterol.

But what if this whole time, we’ve had the wrong idea?

According to WebMD, The IMS reports that Americans spent $307 billion on prescription drugs in 2010. The number one drug at the top of the list is Lipitor, a cholesterol-lowering statin drug totaling $7.2 billion. A February 2011 report by the Center for Disease Control claims that one in three adults has high cholesterol.

But what if having high cholesterol really doesn’t mean you are likely to have heart problems?

“Not only is cholesterol most likely not going to destroy your health (as you have been led to believe), but it is also not the cause of heart disease.”

The Three Biggest Myths About Cholesterol

In the United States, the idea that cholesterol is a bad thing is the common belief. But what is cholesterol, really?

Ron Rosedale, MD, who is one of the leading anti-aging doctors in the United States explains,

Cholesterol is a vital component of every cell membrane on Earth. In other words, there is no life on Earth that can live without cholesterol. That will automatically tell you that, in and of itself, it cannot be evil. In fact, it is one of our best friends.

We would not be here without it. No wonder lowering cholesterol too much increases one’s risk of dying. Cholesterol is also a precursor to all of the steroid hormones. You cannot make estrogen, testosterone, cortisone and a host of other vital hormones without cholesterol.

Some experts say low cholesterol, on the other hand, is not good. That it is often related to depression and aggressive behavior. In Dr. Mercola’s article, The Cholesterol Myth That Could Be Harming Your Health, he explains,

Over 41,000 patient records found that people who take statin drugs to lower their cholesterol as much as possible may have a higher risk of cancer, while other studies have linked low cholesterol to Parkinson’s disease.

2. Fat and Cholesterol in Food is Harmful

Your body produces three to four times more cholesterol than you eat. The production of cholesterol increases when you eat little cholesterol and decreases when you eat enough. This explains why the â€prudentâ€ diet cannot lower cholesterol more than on average a few percent. There is no evidence that too much animal fat and cholesterol in the diet promotes atherosclerosis or heart attacks. For instance, more than twenty studies have shown that people who have had a heart attack haven’t eaten more fat of any kind than other people, and the degree of atherosclerosis at autopsy is unrelated to the diet.

Maybe we don’t need to be so afraid to eat foods high in fat or that have cholesterol or saturated fat. Many forms of fat are actually good for you.Â  Many say good fats such as olive oil, coconut oil, avocados, nuts and eggs are essential and that trans fat is really the only fat we should steer clear of.

3. Drugs are the Only Way to Lower Your Cholesterol

For starters, statin drugs deplete your body of Coenzyme Q10 (CoQ10), which is beneficial to heart health and muscle function. Because doctors rarely inform people of this risk and advise them to take a CoQ10 supplement, this depletion leads to fatigue, muscle weakness, soreness, and eventually heart failure.

Muscle pain and weakness are the most common side effect of Statin drugs.Â  Other side effects include:

The bottom line is, cholesterol may not be the one true indication of your risk of heart disease.Â  Dr. Mercola gives us his opinion on how it is all a money making campaign,

Eight of the nine doctors on the panel that developed the new cholesterol guidelines had been making money from the drug companies that manufacture statin cholesterol-lowering drugs. The same drugs that the new guidelines suddenly created a huge new market for in the United States. Coincidence? I think not.

At least they are coming out and confessing that statin drugs are the cause for these terrible side effects.

For tips on how to lower your cholesterol without the use of medication, read Mark Hyman’s, MD article 7 Tips to Fix Your Cholesterol Without Medication.

Raspberry Ketones: Do they work?
Your Desk Job Makes You Fat, Sick and Dead!