You are here: Home › Our Blog › Chiropractic Care for Babies
By Theresa Groskopp, CN on October 11, 2015 in Health Tips 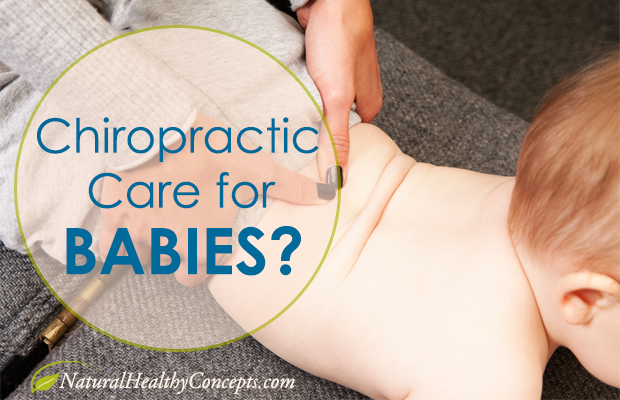 Being born is a traumatic experience: tissues and organs can often be damaged due to the physical pressure a baby encounters during birth, not to mention the forceps, bright light and major temperature drop!

As more and more parents are becoming educated about this spinal trauma, there appears to be an increase in demand for chiropractic care for babies. And, parents are looking to chiropractors for more than just the newborn exam. While chiropractors do not treat conditions or diseases, they are often called upon in the following weeks and months as baby encounters other childhood issues.

Among the most common reasons young babies are seen by chiropractors are colic, sleep issues, nursing dysfunction and ear infections. From a chiropractic perspective, these problems are seen as signs of dysfunction and may be associated with structural injuries impacting the nervous system, says San Diego-based chiropractor, Dr. Steve Tullius.

“The expertise of the chiropractor is in checking the child’s spine for mis-alignments that impair nerve system function therefore affecting overall body function. The bones of the spine, the vertebrae, house and protect the spinal cord. The spinal cord is an extension of the brain and carries information from the brain to the body parts and back to the brain again. Subluxations interfere with the nerves’ ability to transmit this vital information,” as Jeanne Ohm, D.C. describes in her paper, “Why Should Children Have Chiropractic Care?” The chiropractic adjustment is meant to restore nervous system function and allow the body to experience a greater state of well-being.

Let’s take a closer look at a few of the concerns that parents are turning to chiropractic for to help their baby adjust to life’s challenges.

Otitis media is the most common pediatric disorder in the United States. It is estimated that roughly half of all children will have at least one middle ear infection before their first birthday. Some parents, many of whom would rather forego the administration of antibiotics, consider chiropractic for their babies. If you could eliminate the need for antibiotics for your baby, why wouldn’t you?

The goal of chiropractic for ear infections is to mobilize drainage of the ear. As Dr. Fallon explains, “If the ears can continue to drain without a buildup of fluid and subsequent infection, they build up their own antibodies and recover more quickly.” In her practice, treatment focuses primarily on upper-cervical manipulation, directed mainly on the back of the skull or the first vertebra in the neck.

A New York-based chiropractor, Joan Fallon, D.C., published research showing that “after a series of chiropractic adjustments, nearly 80 percent of the children treated were free of ear infections for at least the six-month period following their initial visits (a period that also included maintenance treatments every four to six weeks).”

Colic is commonly described as excessive crying, or crying for more than three hours per day on more than three days per week, according to UpToDate.com. The fact that the cause and treatment for colic remain unknown can be unnerving and extremely frustrating for parents. More of them are turning to pediatric chiropractic care for help.

Chiropractors use spinal manipulation in hopes of correcting nerve interference that may be causing the infant to cry. The adjustment then restores nerve system function so baby can experience better health.

The American Chiropractic Association points to a 2012 study of colicky babies by Dr. Joyce Miller that found “daily crying time decreased by 48% in those babies who received chiropractic care compared to 18% in babies who received no chiropractic treatment.” As Dr. Miller explains, “This study found that excessively crying infants were at least five times as likely to cry significantly less if they were treated with chiropractic manual therapy than if they were not treated.” Wow, that is huge for a distraught parent.

Breastfeeding has been linked to many short- and long-term health benefits, particularly for those babies who nursed exclusively for the first six months. The experience is also an intimate bonding time for infant and mother. So, imagine the disappointment when breastfeeding dysfunction occurs. At a time like this, a new mom may involve a chiropractor in her care team to identify possible bio-mechanical imbalances.

When babies can’t latch on properly, some believe there may be a communication issue between the brain and elements of the suck-swallow reflex. Chiropractic care would then involve “getting the joints moving again, clearing out the irritation of the central nervous system, which opens communication pathways that let the tongue and throat muscles work properly,” according to Dr. Elise Hewitt.

The Anglo-European College of Chiropractic conducted a clinical case series that involved 114 infants with hospital or lactation consultant-diagnosed nursing dysfunction receiving chiropractic care. The results were reported that, “All infants in the study showed some improvement, with 78 percent able to exclusively breastfeed after two to five treatments within a two-week period.”

A baby that has trouble latching can be so upsetting to mom, that she then experiences problems producing milk. A vicious cycle that could possibly be interrupted with pediatric chiropractic care and lactation support.

Finding the right doctor for your need is always important. All chiropractors receive training in adjusting children and infants, though it may also be helpful to look for a chiropractor with aÂ pediatric diplomate. The training in diagnosis of childhood conditions is important and, more important, is your comfort with the chiropractor’s complete approach to health and his/her adjusting protocols. You may find that the chiropractor you use for yourself, and is not a pediatric diplomate but you are completely comfortable with, is the best person to work with your baby.

Have you had success with chiropractic treatment for your infant? Please share your story, we’d love to hear from you!

Best Vegetarian Recipes Even Meat-Eaters Will Love
Is Your Smartphone Affecting Your Health?