You are here: Home › Our Blog › Celery Seed Uses: Supplement, Spice, and Tea
By Theresa Groskopp, CN on September 24, 2017 in Health News 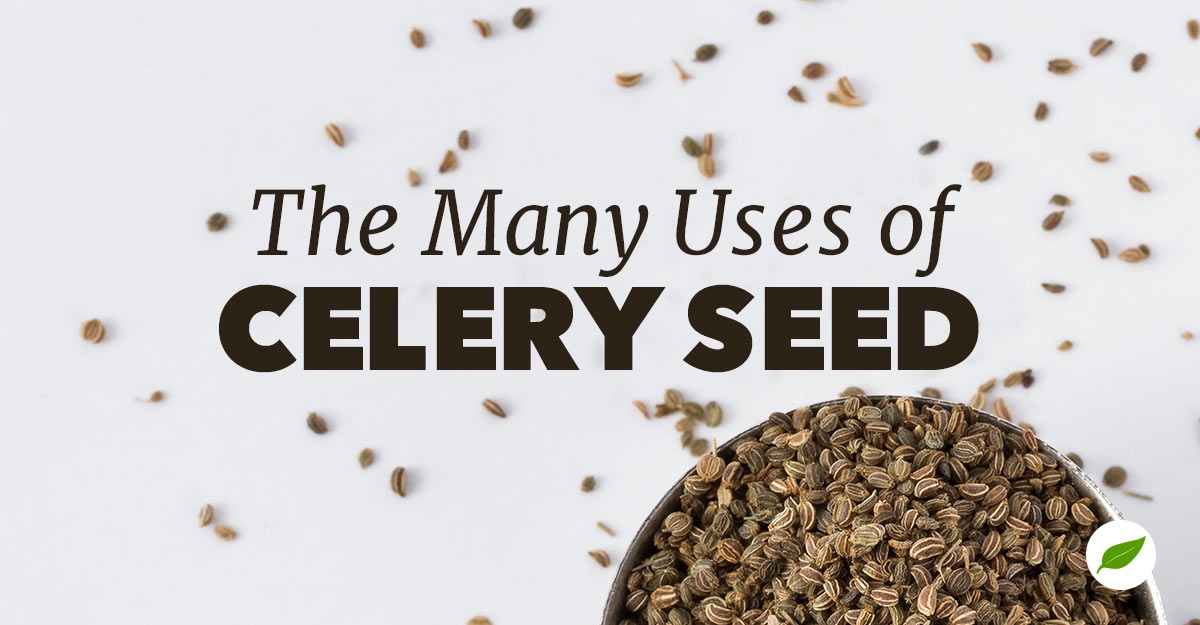 When someone says â€˜celery, whatâ€™s the first thing you think of? Is it after school snacks? Peanut butter and raisins piled atop a stalk of celery? Maybe you think of vegetable trays, or about a steaming bowl of chicken noodle soup.

What you might not think about first is the celery seed. And when we forget about the dozens of celery seed uses, we miss out on one of the best parts of eating celery. Donâ€™t worry: you can keep your ants on a log and your favorite vegetable stock recipe – but now, itâ€™s time to start working with celery seed, too!

While you might not think about celery seed too often, the chances are that youâ€™ve seen it in the grocery store. Youâ€™ll typically find it in the spice section, tucked in somewhere between cajun seasoning and cumin.

What is Celery Seed?

While Celery seed does come from celery, itâ€™s not from the celery we typically eat. We typically eat steam celery for its stalks, Celeriac for its roots, and both of these are descended from a plant called wild celery, or smallage. Wild Celery is where celery seed comes from!

But if you grab a jar of celery seed during your next spice run, the next obvious question is what should you do with it?

The good news is that there are a lot of celery seed uses. When you open your jar, youâ€™ll notice that these celery seeds are light brown and small and slightly bigger than sesame seeds. They are described as having a strong, warm bitter and astringent flavor, and can be added to tomato and vegetable juices.

One of the most frustrating things about cooking with celery stalk is the potential waste. How often have you bought a bag of celery for use in a recipe, only to find yourself throwing out a half bag of wilted celery two weeks later when you ran out of uses? Celery seed can be a fix to this problem. If what you want in a recipe, like a soup or a broth, is the flavor of celery, but you donâ€™t need an entire bag of celery stalks, then celery seed is an excellent substitute. It has the same flavor of celery, but with none of the potential waste.

Alternatively, if you run into the opposite problem and are in the middle of making dinner when you realize your recipe calls for celery and you donâ€™t have it, keeping a jar of celery seed on hand solves the problem. It can subsitute for celery in a pinch.Â

As a Flavoring Agent

When taken whole, celery seeds are slightly bitter, and although tastes will differ, some people enjoy the different flavor. However, in the right combination, they can add a delicious depth of flavor. Celery seed is sometimes used as part of seasoning blends for poultry, so the next time youâ€™re tinkering around in the kitchen, try adding a little celery seed to your favorite spice blend; or sprinkle a little on top of your baked chicken, along with salt, pepper, oregano, lemon, and olive oil.

Celery seed has been used as a diuretic in the Eastern world for thousands of years. Some studies have shown that celery seed may help maintain blood pressure in animals, and may support a healthy liver.

Celery seed also contains polyphenols, which are â€œabundant micronutrientsâ€ and are believed to support a variety of nutritional goals.

Do you keep a jar of celery seed in your pantry? What are some celery seed uses that you have found useful?