You are here: Home › Our Blog › Castor Oil and Mud Packs: Detox Tools
By Theresa Groskopp, CN on December 31, 2015 in Health Tips 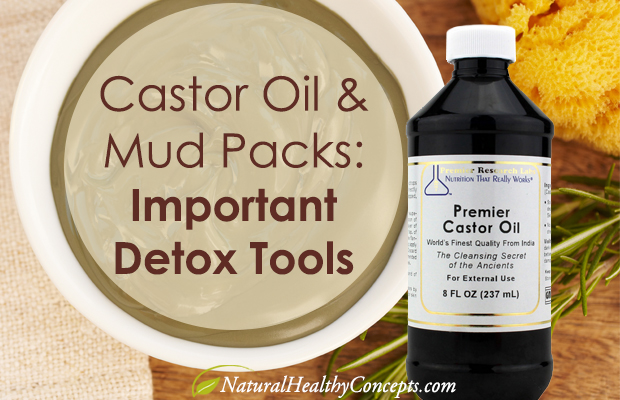 Over the years, our bodies accumulate toxins that disrupt the body’s energy flow, and its lymphatic and nerve systems. Things like surgery, previous trauma, scars, vaccination sites and even dental work can also cause blockage in the flow of bio-energy in and around the body.

In traditional Chinese medicine, castor oil and mud packs are utilized as manual therapies that a person can use themselves to release stagnation in the flow of energy or blood in the body. These substances have chemical properties that make them powerful energy movers and toxin cleansers.

Let’s take a closer look at the two therapies.

The therapeutic use of castor oil has been traced back to ancient China, India, Egypt, Greece, Rome and Africa. According to The Premier Center, “By using castor oil packs, the flow of lymph is increased throughout the entire body. This helps to speed the removal of toxins surrounding the cells. Â The end result is a pronounced, systemic improvement in organ function with a general lessening of fatigue.” Castor oil also contains vitamin E, proteins, minerals and bacteria-fighting properties. It is often used with heat and manual manipulation to slowly ease out blockages.

Edgar Cayce popularized its use in the form of castor oil packs in the 1930s. The castor oil-saturated flannel cloths that are applied to the skin are believed to “induce a high frequency resonant effect that allows the castor oil’s immune-boosting phytonutrients to deeply penetrate the cells, triggering a purging of stagnant toxins,” saysÂ Dr. Marshall of Premier Research Labs.

How to Use Castor Oil Packs

It is important to use cotton/wool flannel cloth (ideally organic flannel) like the one found in this castor oil kit when making castor oil packs. Two layers or more of the flannel are saturated with castor oil (wet, but not dripping). This is then placed directly on the area you are treating. Next, a larger piece of plastic is applied over the top of the cloths. Then, a heating pad, set on a medium setting or as hot as is comfortable, is applied on top. Â A heating pad is not absolutely necessary, but is highly suggested for optimal absorption, circulation and relaxation. The castor oil pack is generally left in place for 60 minutes. Upon completion, the flannel should be discarded, as it is contaminated with toxins and waste products.

I had an interesting outcome with a castor oil pack. My husband and I had returned home from a Caribbean vacation and both his ankles remained swollen for a week afterward. He tried a variety of things to bring the swelling down without success, including a diuretic. He had no other symptoms or problems. We decided to try a castor oil pack. After applying a pack nightly for several days, the swelling went down and his ankles were normal. We were both surprised and pleased with how easy it was to use the castor oil pack.

This article, “20 Strange but Effective Everyday Uses for Castor Oil,” highlights more ways to use this ancient medicinal liquid.

Have you ever gone to a spa and taken a mud bath? Mud has been used throughout history for its therapeutic effects. The source of the mud is of high importance, however. The mud in your backyard can contain lead, bacteria and other toxins. There are certain regions of the earth that produce mud with beneficial mineral and biological profiles. Important components include mineral salts, selenium, aragonite, magnesium, CO2, bromide, iodine, calcite, iron, sulfur and more. Dead Sea and volcanic muds are popular because of their unique properties.

Due to mud’s water solubility, it allows the skin to absorb its nutrients, as well as the nutrients of other products that may be applied with it. Â In many African, Asian and European countries, mud is considered by healthcare experts to offer specific medicinal properties.

Mud packs, which may be made from a combination of muds and clays, are said to pull toxins, including heavy metals, from the body. Mud packs have also been thought to help clear interference fields as suggested by The Premier Center. Interference fields may even be unknown or hidden – old traumas or injuries that may inhibit positive energy and flow.

How to Use Mud Packs

Mix the clay with clean, non-chlorinated water.Â  Then, apply the mud evenly to an organic flannel cloth, forming a uniform layer of one-half to one inch in thickness. Next, fold all the sides under to enclose. Finally, apply to targeted area for 20 to 30 minutes.

Rinse the area with clean, non-chlorinated water. Complete your experience by mixing 2 oz of AloeProÂ in at least 12 ounces of clean water to naturally help flush toxins that may be circulating within the body.

How to Order Premier Research Labs

I have specified Premier Research Labs products here as I have found them to be pure and work especially well. However, Premier does restrict the sale of their products as most professional brands do. They are becoming even more restrictive to prevent the sale of their products on Amazon – since Amazon is not a healthcare professional and they only sell to healthcare professionals! If you want to use these items and haven’t had a consultation with me in the past, just call our toll free number, 866-505-7501, to set up a time for a free phone consultation.

Have you benefited from the use of castor oil and mud packs? We’d love to hear your story, so comment below! And, enter your email address here to receive educational posts like this one directly in your inbox!

Joint Pain & Your Dog: What You Need to Know
6 Hot & Healthy Drinks for Holiday Warmth

One Response to Castor Oil and Mud Packs: Detox Tools