You are here: Home › Our Blog › How To Tell If Your Mole Is Cancerous & 7 Natural Ways To Remove Them for Cosmetic Reasons
By Ashley Steinbrinck on June 30, 2015 in Health Tips 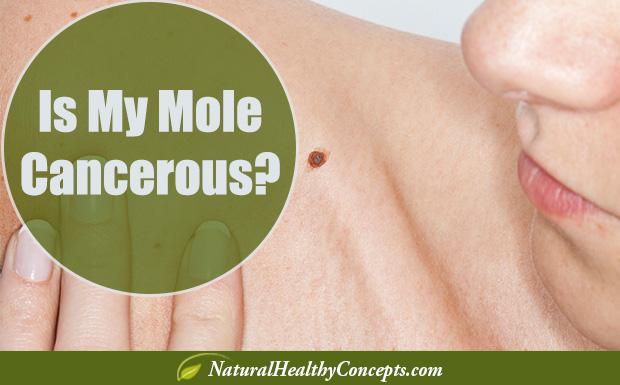 Whenever I think of moles, I can’t help but remember the “Moley Scene” from Austin Powers in Goldmember. Perhaps you can relate to the embarrassment of Fred Savage’s character, depending on where your moles may be. The good news is, there are plenty of natural ways to shrink or even get rid of them!

Sometimes moles are no laughing matter, but most often, they are nothing to worry about. With that said, it’s still important to examine your skin once in a while. Our skin is like a window to the health of our insides, and as you most likely know, moles can be a warning sign of skin cancer.

While skin cancer is the number one most common form of cancer, melanoma is the one that raises the most concern. The good news is, melanoma is most-oftenÂ  curable if found and treated early enough.

That’s another reason it’s common sense to give your entire body a thorough exam. Many experts say that you should do it once a month – especially if you are at an increased risk of developing melanoma or have a history of cancer in your family.

However, one thing you may want to know from a study in the American Academy of Dermatology, is that 90 percent of melanoma patients may have their moles removed unnecessarily, which may actually increase the risk of cancer. For that reason, educate yourself and get multiple opinions before you proceed.

First, learn about the different types of moles, how you can tell if they are worrisome and seven natural ways to remove them.

The 3 Types of Moles

Moles are simply a collection of cells that are heavily pigmented. Some moles have the potential to become cancerous. Here are the three types of moles.

Congenital – moles that are present at birth – these moles have a higher risk of developing melanoma.

Acquired – moles that develop in childhood and early adulthood. Usually smaller than a quarter inch.

Atypical or Dysplatic– moles that are larger than a pencil eraser (6mm) and oddly shaped with uneven borders and multiple shades of color. These moles also have a higher risk of developing melanoma.

The Pros and Cons of Having An Abundance of Moles

It turns out there are experts who discovered some advantages of having a lot of moles, besides the beautiful Cindy Crawford beauty marks, of course.

Advantages of having all those moles

Some researchers say more moles could mean younger skin and better bone density. In studies done at Kings College in London, researchers were able to prove that people with more than 100 moles were half as likely to develop osteoporosis, compared to those with 25 moles or fewer.

Disadvantages of having all those moles

Having more moles has also been linked to an increase risk of cancer. Dr. Bataille says, “This is not just melanoma, but also more common cancers such as breast and colon cancer.”

Some people are also embarrassed by their appearance, and for cosmetic reasons, want them to be removed.

It also might mean you aren’t getting enough potassium, but this is something that can be fixed.

Some experts, like Dr. John Christopher, believe moles come about when you’re not absorbing enough potassium. The National Institute of Health suggests adults aged 19 and older should be getting 4.7 grams of potassium daily.

You could add more potassium rich foods like beet greens, sweet potatoes, spinach, broccoli and avocados to your diet. You could also try supplementing with a liquid multiple vitamin-and trace mineral supplement like this one.

How to Tell if Your Mole is Cause for Concern

Moles are found wherever we have skin.Â We can even get them between our toes, on our ears, lips, neck, bum, genitals and underneath our fingernails.

As far as melanoma is concerned, the most common areaÂ melanoma develops in men is on the back; for women it’s the lower leg.

There are some specific characteristics of moles that can help you determine whether or not you should keep an eye on one, or seek out a doctor’s opinion. This is easily done with the ABCDE Rule.

When one half of your mole looks different from the other half, if you were to draw a line straight down the middle.

Any mole with an uneven border that is not well defined or is scalloped is cause for concern.

Typically moles are one color. When a mole has several shades of color or looks to have a mixture of black, brown, white red and blue, it’s best to get it checked out.

Moles are usually smaller than the top of a pencil eraser. That doesn’t mean any mole that’s that size or larger is an issue. But sometimes it’s a good clue and should be looked at a little closer.

Not all experts believe this is the best approach for determining whether a mole is worrisome because moles progress with age. Pregnancy, puberty and hormonal changes can also cause moles to change. But some moles that rapidly get larger and change shape could be cause for concern.

When you notice an odd looking new mole that recently developed, or one that is all of sudden painful, itchy, red, bleeding oozing or cracked, it’s best to get it looked at by a dermatologist or other healthcare professional.

Ever wonder about the bright red or purplish dome-looking moles that suddenly appeared on your skin? They’re likely cherry angiomas. These are not actually moles, they are clusters of capillaries at the surface of the skin.

I’ve had some of these myself, and when I asked my doctor about it he didn’t seem worried at all. Most doctors will tell you there’s no known cause, that they appear later in life and that there is no reason to be concerned.

But others say it could be a sign of bromine poisoning, which is a halogen found in many pesticides, plastics, bakery goods and more. If you get too much bromine, it leads to iodine deficiency.

This might make you cringe, but I cut my bright red cherry angimoa off with a scissors once. Little did I know, I could have put some Ancient Minerals Magnesium Oil on it to help it go away. Avoiding foods and other products containing bromine could helps as can eating more foods rich in iodine.

With all of our advanced technology these days, there are actually some pretty easy ways to keep track of your moles with your smartphone.

The Mole Doctor App allows you to take a picture of your moles and detect whether or not it is irregular based on the augmented reality technology and the ABCDE rule.

The app will save the information so you can continue tracking your moles over time.

If it’s simply cosmetic reasons you’re worried about, like in my Austin Powers example, there are things you can try at home that have helped others remove or shrink their moles. But please note: this is only for moles that appear normal! If you have any doubt about the appearance of a mole – seek professional help.

What You Should Know About Moles, Skin Cancer and the Sun

When it comes to moles, excessive sun exposure is often to blame. Heck, most skin cancer is blamed on the sun.Â  Most cancer groups and dermatologists are quick to blame the sun for skin cancers. Is sun really the enemy?

This not only creates a fear of sunlight, it leads people to believe they need to “protect” or douse themselves with toxic sunscreens or sunblock. But, most sunscreens have ingredients that are as bad or possibly even worse for our bodies to absorb. Plus, this robs our bodies of essential vitamin D absorption and other benefits we get from the sun’s UVB rays.

Most articles you’ll find about skin cancer will advise you to stay protected during the hours of 10am to 2pm when the sun is the hottest. But, this could be the worst advice we could be getting.

Mercola points out, there is evidence showing that exposure to UVB light is actually protective against melanoma and many other diseases.

In fact, the April-June issue of Dermato Endocrinology confirms the health benefits from sun exposure, besides vitamin D production. The benefits include things like:

NOTE – In order for our bodies to generate vitamin D from the sun, the sun must be at an angle of about 50 degrees from the horizon. For the northern regions, that means your best opportunity for proper vitamin D exposure from UVB light is from the end of March through September and from 10 am until 3 pm on sunny days. Plus, 40 percent of your skin has to be exposed for 15-20 minutes without sunscreen.

Dr. Mercola shows you how to use the U.S. Navy site to calculate your city’s best chance for beneficial vitamin D production in this video.

It’s actually the sun’s UVA light that can cause cancer. This is evident in studies documented in The Lancet, Medical Hypotheses and the European Journal of Cancer.

So, a better way to address this issues is to advise us to get our 15-20 minutes of unprotected sunlight exposure, and then either get in the shade or put on natural and organic sunscreen protection that’s free from harmful toxic chemical ingredients.

Supposedly, our genes and other factors in our biological makeup can play a part in our risk for developing malignant melanoma or non-melanoma skin cancer.

Those at higher risk of developing skin cancer include:

Hopefully you found some helpful information as well as resources to continue your research in this article. Your knowledge about the different types of moles can come in handy in the future for yourself or your friends and family.