You are here: Home › Our Blog › Taking a Drug Test? California Poppy Effects May Fail You
By Theresa Groskopp, CN on September 5, 2018 in Health Challenges, Health Tips, Nutrition Supplements 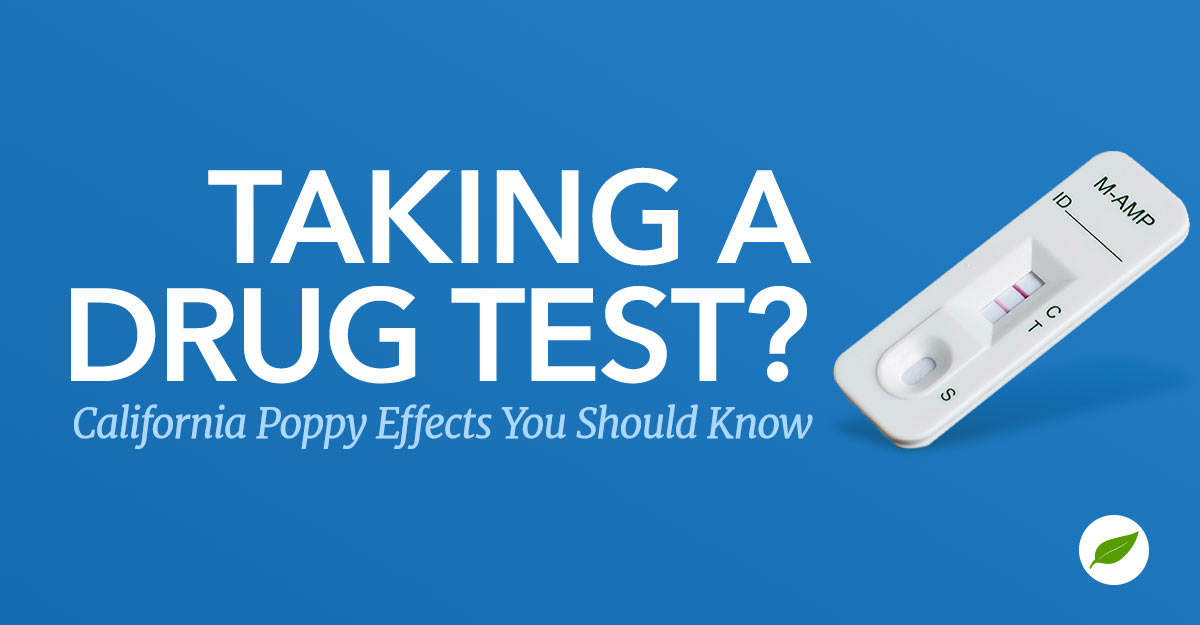 Although it is a distant cousin of the infamous opium poppy, California poppy (Eschscholzia californica) is far less potent, opioid-free, and is widely used as helpful supplement in natural health circles for temporary pain relief and a sense of overall calm. However, it does contain alkaloids that may give similar results on a drug test to those of its opium cousin, Papaver somniferum. Keep reading to learn more about several California poppy effects and potential health benefits.

Have you ever gone to take a standard drug test for an employer and thoughtâ€¦ wait, have I eaten a poppy seed recently? Am I going to test positive for opiods? There are a lot of misconceptions and confusion surrounding poppy seed products, as well as herbal extracts and supplements created from poppy pods, including from the California poppy plant. What you need to know is that California poppy is a far cry from dangerous opioid drugs and is a perfectly legal, common herb used in dietary supplements for health support. However, research does show that ingesting any poppy products will produce a false positive and could complicate the results of urine drug testing. So, to be on the safe side, avoid ingesting any poppy seed products at least 48 hours before taking a drug test.

However, drinking home-brewed tea or smoking dried leaves of the plant are not recommended. Although many herbs and flowers are beneficial when steeped into a tea, this is not necessarily the case with the California poppy or other poppy pods. In fact, drinking tea brewed from certain poppy pod seeds could potentially have lethal results. According to an article, â€œThe high concentration of morphine contained in unwashed poppy seeds and extracted through home-brew methods may pose a danger of overdose or death.â€ Of course, this article refers directly to the Papaver somniferum plant, not Eschscholzia californica, but homebrewing any poppy seeds could potentially pose a health risk, so it is highly unadvised. In addition, you should avoid smoking dried California poppy plant leaves, as it could cause health complications and lead to vomiting or illness.

On the other hand, when used properly and in smaller quantities, California poppy is considered relatively safe for use.

Unlike poppy seed teas or opioid drugs from its cousin plant, California poppy extract, when taken in a regulated supplement form, is a way to experience the potential health benefits of the poppy plant. Research shows that California poppy extract supplements may help provide mood support, ease musculoskeletal discomfort, and help transition the brain to restful sleep.

Scientists believe that one of the reasons for these potential benefits centers around the alkaloids contained in the California poppy. Researchers theorize that the alkaloids affect GABA receptors, â€œwhich are widely expressed in the brain mainly at the inhibitory interneurons.â€ Ongoing research is currently underway to gain an understanding of how and why the alkaloids protopine and allocryptopine, which are also present in California poppy, interact with the human nervous system.

Take A Look At These California Poppy Products

If youâ€™re ready to try California poppy for yourself, Natural Healthy Concepts has a few recommendations to get you started. California Poppy from Natural Balance is an alcohol-free full-spectrum extract that may help support natural pain relief and a calming effect, helping to ease mild anxiety. This liquid supplement can be taken alone or mixed in juice or water. Another liquid option is Organic California Poppy extract from Herb Pharm. This formula contains extracts of the whole flowering plant (root, leaf, and flower) which is grown in Herb Pharmâ€™s fields of golden poppy plants.

Do you have any notable experiences or questions about these or other potential California poppy effects? Leave your stories and questions in the comments section below!