You are here: Home › Our Blog › Caffeine: The Good, The Bad & The Ugly
By Jackie Peters on March 6, 2017 in Health Challenges, Health Tips, Parenting 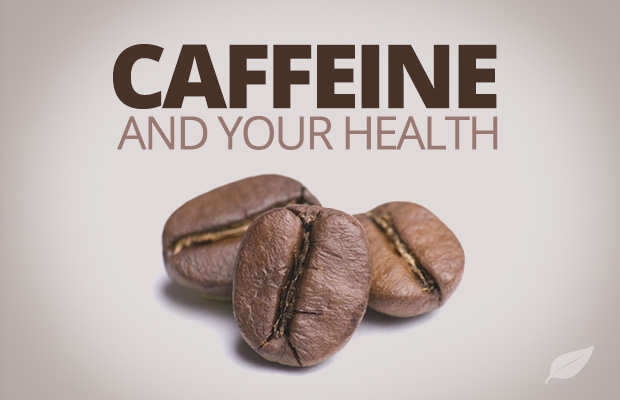 “Caffeine is the only addiction you’re allowed to joke about.”

This sign at the local coffee shop gave me pause. Though a light-hearted jab, it does touch on an important point: caffeine is a drug, the least-regulated, but most popular drug in the United States. Millions of us turn to it each day to wake us up, alleviate fatigue and possibly aid our focus. But, what are the consequences, if any?

As with many “naughty” habits (e.g., chocolate, binge watching, etc.), its use most often doesn’t pose health problems, as its effects are not exclusively good or bad. It is when we go to extremes that things get a bit mucky. And, with caffeine, that is very easy to do.

As the Center for Science in the Public Interest points out, “Up until about two decades ago, the only foods with added caffeine were soft drinks; and the Food & Drug Administration (FDA) limited its content to 48mg per eight ounces (6mg/oz).” And then came Red Bull. And then copycat energy drinks.

Today, caffeine is everywhere! It is being added to an increasing number of products, most of which are enticing to children and adolescents. Now, more than ever, we must consider the cumulative effect â€” and be mindful of the signs that we need to curtail our caffeine habits.

So, let’s take a closer look at this drug to ensure we are using it safely.

The Lowdown on Caffeine

Caffeine is a naturally occurring substance that exists in over 60 plants (leaves, seeds and fruit), such as coffee beans and leaves, cocoa beans, tea leaves, yerba mate, guarana berries and kola nuts. This alkaloid works as a natural pesticide to keep certain insects from eating the plants.

Though it was used as a recreational and medicinal drug for thousands of years prior as people chewed the leaves, seeds and bark of these plants, the chemical was not discovered until 1819. “A young physician, Friedlieb Ferdinand Runge, isolated and purified the white crystalline substance,” using Arabian mocha beans.

Today, it is classified as a xanthine alkaloid compound that acts as a nervous system stimulant in humans. It works by blocking a brain chemical called adenosine, which acts as a depressant in the brain, from entering nerve cells promoting sleep and suppressing arousal.

Our “can-never-get-enough-done” society has fully embraced this drug. In his article, “Coffee: The demon drink?,” Richard Lovett estimates that 90% of adults in North America consume caffeine daily. (Source)

Modern research continues to indicate that moderate amounts of caffeine consumed by the general healthy population are safe and do not harm health. The FDA’s current stance is that the drugÂ is safe for healthy adults (the elderly and those with hypertension are more vulnerable) at amounts up to 400mg per day. The American Academy of Pediatrics discourages the consumption of caffeine and other stimulants by children and adolescents. While Mayo Clinic suggests that adolescents should be limited to no more than 100mg a day.

This means we must be mindful to tally our intake from all sources throughout the day, considering serving sizes, and stay at or below what is considered the moderate range of 300-400mg for adults. We should also discourage our children from caffeine use.

Consumption Recommendations from Across the Globe

The European Food Safety Authority has deemed that adults can safely consume up to 5.7mg of caffeine per kg of body weight (so a woman weighing 60kg, or 132 lbs, should consume no more than 342mg per day), not to exceed 200mg in a single dose. It found that there isn’t enough data to declare safe levels for children and adolescents.

Australia New Zealand Food Authority maintains that, based on two decades of research, habitual use of caffeine leads to physical dependence, and offers no demonstrated benefits. Also, dietary caffeine has harmful physical and behavioral effects, which probably extrapolate to children.

The International Food Information Council has concluded that a moderate intake of 300mg of caffeine per day does not cause adverse health effects in healthy adults. (Source)

In order to get a better idea of and help gauge your consumption, check out this chart, which was made from information shared by the Center for Science in the Public Interest. 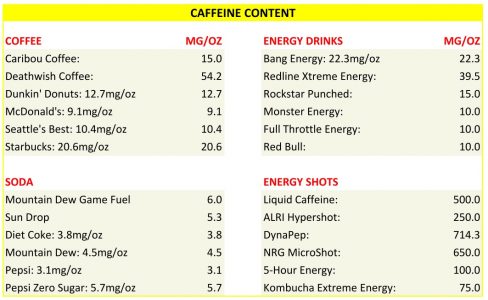 Note: Caffeine can affect some of us more than others. This can be due to age, body mass, medication usage, health conditions, such as heart, blood pressure and anxiety disorders, and other factors. People who do not consume this drugÂ regularly and women who are pregnant tend to be more sensitive.

You have to admit, a dose of caffeine can really help get us going in the morning! It has many other benefits as well:

But, don’t consume caffeine within 3-5 hours of bedtime, so you’re able to get a good night’s sleep!

There are some issues that come with caffeine consumption that we must all be aware of. Consider these:

As I mentioned at the beginning of this article, caffeine is being added to an increasing number of products, including gum, mints, tea infusers, hard candies, gummy chews, yogurt, protein bars, sunflower seeds, marshmallows and many others. Unfortunately, as these products continue to roll out, food and beverage companies “know that this stimulant increases the probability that their products will be purchased and consumed, and that it induces dependence and builds customer loyalty.” (Source)

These leave children and adolescents with easy access to caffeinated products, and at risk of dependence and excess consumption. These young people are not able to carefully consider the cumulative impact of consuming these caffeine-laden items throughout a day, whichÂ leaves the door open to several health concerns.

For example, caffeine can interfere with their sleep, which is especially important while their brains are still developing. Lack of sleep also affects school performance, behavior and other areas of these children’s lives. With kids not getting enough sleep to begin with, the sleeplessness caused by caffeine can be a huge problem both in our schools and our homes.

A contributing factor in all of this is that companies do not have to identify the amount of caffeine in products in our country. According to the U.S. Food & Drug Administration, “The Nutrition Facts Panel on food labels is required to include recommended dietary information for nutrients. Caffeine is not a nutrient. It is a natural chemical found in such items as tea leaves, coffee beans, and cacao (used to make chocolate).” However, if caffeine is added to a food, it must be included in the listing of ingredients required on food product labels; though the amount of caffeine the product contains is not necessary at this time.

It has become a huge issue because proper regulations are not in place here. Originally, the FDA only formally allowed caffeine for colas in the 1950s. Current rules were set, never anticipating the proliferation of caffeinated products.

In Europe, any food or beverage that doesn’t naturally contain caffeine must list the ingredient and identify the amount it contains on the label. In addition, the European Commission specifically warns that, “For children, an increase in the daily intake of caffeine to a certain level of consumption per day may bring about temporary changes in behavior, such as increased excitability, irritability, nervousness or anxiety.” (Source)

The use of added caffeine in food is currently being investigated by the FDA â€” particularly its consumption by minors.

If you think you may be consuming too much caffeine, be sure to cut back gradually, down to three cups per day.

What are your feelings on minors and caffeine? Share your thoughts in the comments below!

Fiber and the Microbiome: What’s the Connection?
5 Reasons You Should Breathe Paleo Air

One Response to Caffeine: The Good, The Bad & The Ugly