You are here: Home › Our Blog › Black Walnut Hull and Wormwood for Digestive Health
By Angela Halderson, RD on March 11, 2018 in Diet, Health News, Nutrition Supplements 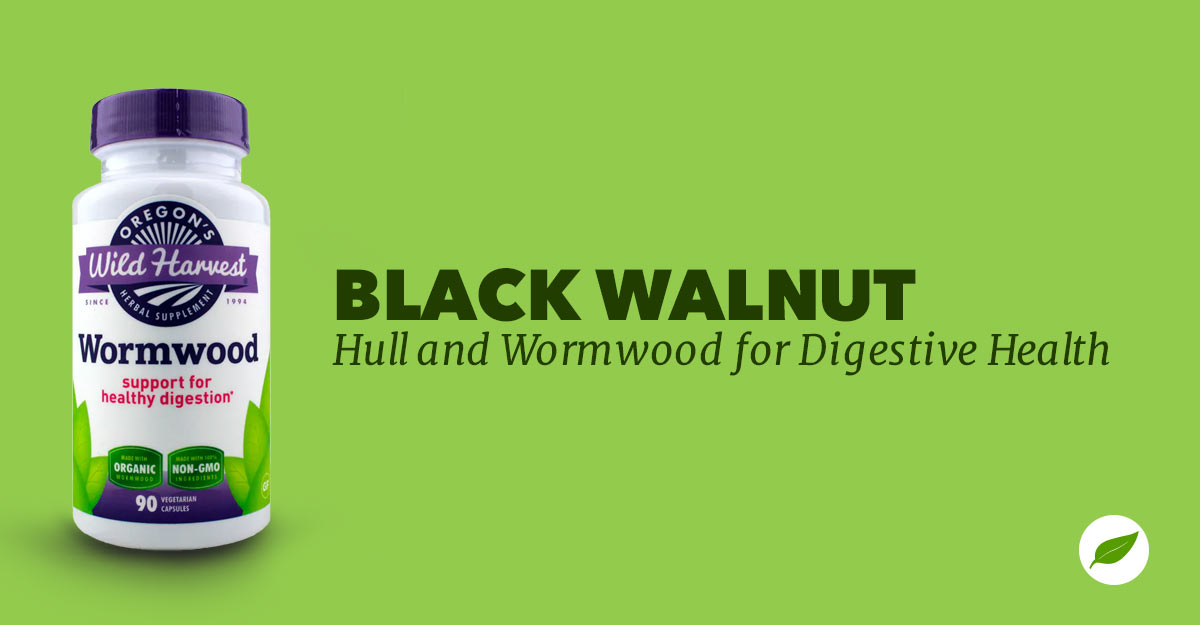 The black walnut tree thrives in the eastern United States, where a single tree has the potential to live for hundreds of years. While the treeâ€™s timber is considered a highly decorative wood, the walnut itself has several uses. A hard shell covers the nutmeat, which is a nutritious food source of protein, vitamins B5 and B6, omega-6 fat, and minerals such as manganese. The unripe walnut is covered by a green skin called the â€˜hull,â€™ and itâ€™s this thin layer of the black walnut that is used medicinally.

Wormwood is a bitter herb that has been cultivated in many parts of the world. Wormwood is a key ingredient in certain liquors such as absinthe and vermouth. Its aromatic nature gives the herb domestic uses such as soaps and perfumes. The above-ground parts of wormwood are made into oils that can be used medicinally.

Tannins are astringent and may help balance proper function in digestive tissues. The acidic properties of tannins may also help promote microbial balance in the body. Black walnut hull is said to promote healthy bile flow, which has the effect of expelling parasites that find their way into the body. Taking a black walnut hull supplement might be an effective way to protect the body against parasites that steal nutrition from the body and thereby sap the bodyâ€™s energy production.

There are multiple forms of black walnut hull you can take as a supplement. Like many other dietary supplements, the black walnut hull can be processed into a liquid form or capsules. Black Walnut Hull from Kroeger Herb is a tincture that supports digestive health. Among other potential benefits, this supplement â€œmay support bowel health and regularity.â€ Black Walnut Health 500 mg is a capsule that also promotes gastrointestinal health. In addition, the supplement may promote skin health and optimal throat comfort.

Wormwood is often taken as a supplement to aid against candida, a type of yeast infection. Thujone is thought to be the active ingredient in wormwood oil that helps to provide this support. It is common for a low level of fungi to live in a personâ€™s gut without negative repercussions. However, when an individual’s immune system is weakened, they may wish to purge their body from foreign fungi. It is thought that wormwood may support the removal of candida.

Wormwood continues to be studied for its potential to aid against health complications which occur in the small intestines. The herb is commonly taken as either a liquid or capsule. Wormwood Extract from Herb Farm is a liquid which uses wormwood extract which may promote digestive health. Wormwood from Oregonâ€™s Wild Harvest is a capsule form of the herb that supports overall abdominal health.

Black walnut hull and wormwood are just two of natureâ€™s options to support digestive health. A diet that includes high-fiber foods, probiotics, and proper hydration is usually the first step to promote a healthy gut. Yet nutritional gaps might still exist in your gastrointestinal tract. Consider taking a black walnut hull or wormwood supplement to support a happy gut and give your bowels an extra boost.