You are here: Home › Our Blog › Black Cohosh Uses Include Support for Aging Women
By Angela Halderson, RD on March 12, 2018 in Nutrition Supplements 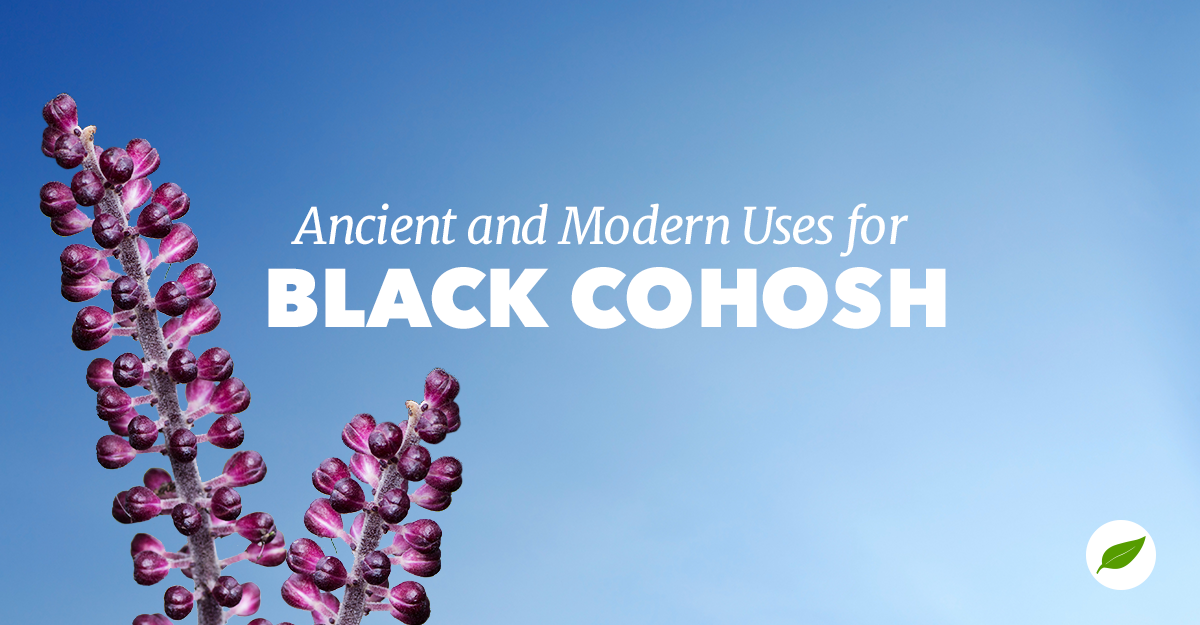 Black cohosh is a perennial herb native to eastern North America. The plant is distinguished by a white, towering flower that is without petals or sepals. The Native Americans are credited with introducing medical uses for the black cohosh root to European colonists.

One of the more unique traditional uses of black cohosh was as a bug repellant. The plant is sometimes referred to as â€œbugbaneâ€ because of its strong odor which was thought to keep insects away. â€œBlack Snakerootâ€ is another nickname the plant earned as it was sometimes used to treat snake bites. While these folk medicine practices have not been embraced by Western medicine, there is still a variety of credible black cohosh uses today.

Black cohosh is sometimes given credit for supporting different areas of the body such as the immune and respiratory system, even though there are generally no studies which validate those claims. However, black cohosh has been studied for its effects on hormone balance in aging women. Many researchers have concluded the herb can have an estrogen-like effect for women in that age group.

Estrogen is responsible for the growth of secondary sexual characteristics in females during puberty. Estrogen also plays a role in womenâ€™s menstrual cycle as well as their reproductive cycle. Aging women going through menopause experience a lowering of estrogen levels, which leads to a variety of related health challenges.

Taking Black Cohosh can offer support against health challenges faced by aging women. After menopause, many women will experience a loss of bone density. The herb has been shown to have a positive effect on the maintenance of healthy bones for women going through menopause.

Hot flashes are another inconvenient symptom of menopause. As a result of complex hormonal changes, hot flashes occur when blood vessels near the skinâ€™s surface dilate to cool. While it is sometimes cautioned that clinical trials which test the effect of black cohosh on menopausal symptoms are not thorough enough, there are still sources which claim that â€œblack cohosh alleviates hot flashes in humans.â€

Women seeking an alternative to hormone replacement therapy may be advised to supplement black cohosh into their therapy. Some medical professionals believe the health risks are too high in hormone replacement therapy, and without an alternative to support the changes that occur in the production of hormones, black cohosh may be considered as a comparable alternative. Black cohosh, when taken in small to medium dose, has minimal side-effects. When side effects do occur, minor symptoms may include stomach pain, feeling sick, and skin irritation.

In addition to the wide range of physical symptoms faced by women post-menopause, black cohosh has also been researched for its influence on cognitive health. Remifemin is the most studied form of black cohosh. In a study that measured Remiferinâ€™s effect on several symptoms related to cognitive health, researchers concluded that â€œRemifemin may effectively reduce the severity of symptoms of menopause.â€

Because there are several black cohosh uses related to aging women, the herb has been referred to as the most famous natural remedy for womenâ€™s health issues. While more research is needed to better understand the active components of black cohosh, plenty of research supports the claims that the herb may have a positive effect on symptoms experienced by women after menopause. It may not be able to replace estrogen fully, but black cohosh may provide a valid, alternative option for women seeking an alternative to hormone replacement therapy.