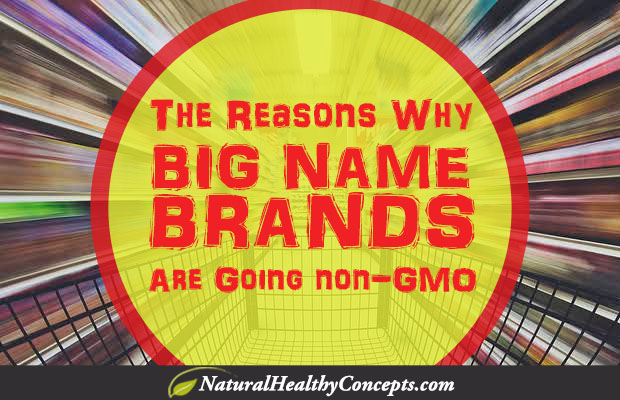 The organic section at your local grocery store might be getting a little bigger these days. You may even notice recognizable brands proudly proclaiming their products are “non-GMO,” “gluten free” or “USDA organic.”

So is the tide turning in the food industry? Or is this just another marketing ploy? Could it simply be a way for big corporations to capitalize on current trends and make sure they don’t lose business to smaller manufacturers giving health-conscious shoppers what they want?

You’ll often hear proponents of healthier, natural food say you need to vote with your dollars. It certainly seems that larger companies have taken notice of the growing demand for products that are truly non-GMO, gluten free or certified organic.

For evidence of that, just look at how corporations have been snatching up some of the more-popular natural brands.

The problem is, sometimes when bigger businesses take over, these once-trusted brands start falling away from their original vision, and at times they can even deceive their loyal customers.

For instance, in 1999 General Mills purchased Cascadian Farm, which is know for its organic cereal and granola bars. But not long after the acquisition, customers noticed a change in the cereal.

The sugar content had tripled from 1 gram per serving to 3 grams of sugar. Following an uproar from consumers, Cascadian Farms went back to the original recipe.

Popular ice cream maker Ben & Jerry’s also upset customers just two years after Unilever acquired it. In 2002, the Center for Science in the Public Interest accused Ben & Jerry’s of being dishonest about its “all-natural” label.

A few years later, Ben & Jerry’s CEO Walter Freese admitted the company had lost its way and pledged to return to a focus on social issues and sustainable practices. But sticking to your guns can’t be easy when you’ve got a conflict of interest with the corporation that owns you.

According to the website GMO Awareness, Ben & Jerry’s supports the move for mandatory GMO labeling. However, that’s not the case for its parent company. Unilever donated hundreds of thousands of dollars in support of efforts to defeat a California proposal for GMO labeling.

All too often – when the big fish take over the pond – things start heading in the wrong direction. That’s no surprise. But could the opposite also be true? 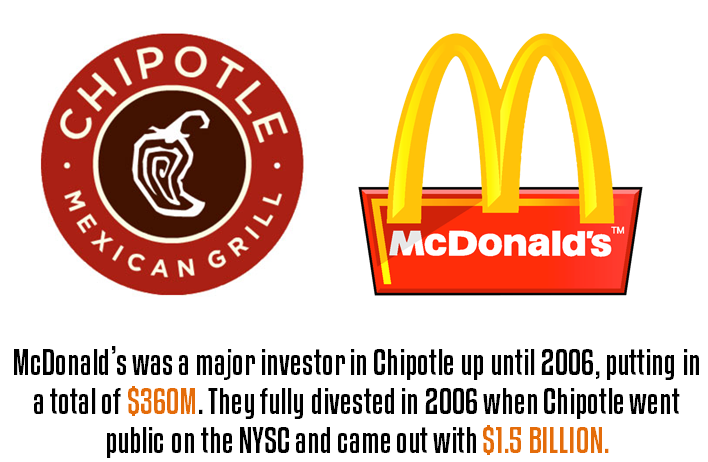 Remember when McDonald’s was a major investor in Chipotle Mexican Grill? At one point the burger-chain owned 87% of Chipotle. Then it completely divested and sold all of its shares in 2006. Ever since then, Chipotle has seemed to be on the rise while McDonald’s has been struggling with a decline in sales.

According to Business Insider, Chipotle’s sales grew by 16% in 2014, while McDonald’s saw a 1% dip over the same time.

In 2015, Chipotle became the first national restaurant chain to commit to using only non-GMO ingredients. That’s no small commitment when you consider that around 90% of U.S. corn crops are genetically modified – and corn is a pretty important ingredient for tortillas!

Chipotle is taking some heat for the move too. An opinion article in the LA Times called Chipotle’s reasons for the removal of GMO ingredients “junk science,” while a Motley Fool writer believed it was a bad business decision that would hurt consumers’ wallets and eventually Chipotle’s stock prices too.

There is some truth to that. Chipotle plans to raise prices by 4 to 6% in the third quarter of 2015 because of the high cost of obtaining hormone-free beef. The restaurant chain’s CFO says Chipotle is actually losing money when a customer orders a burrito with steak instead of chicken.

If you’re wondering – Chipotle’s first quarter growth in 2015 was slightly off expectations (10.4% growth when 11.8% was expected). Plus, there has been a bit of a stock sell-off that has some investors wondering about the company’s future.

It will be interesting to see if Chipotle stands by its decision when it still has to please stockholders.

Some big brands are going non-GMO without making a big deal about it, because they just aren’t sure how people will react or how it will impact business.

“Ultimately, these big companies aren’t just friends with Monsanto or something. They want to make a profit, and they want to be able to do what’s going to make them money.”

In 2014, General Mills introduced non-GMO original Cheerios. The oats in Cheerios were already non-GMO, but General Mills took steps to change where it sourced other ingredients so the entire product would be GMO-free. However, as reported on Forbes.com, the impact of non-GMO Cheerios on overall sales wasn’t enough to convince General Mills to introduce other non-GMO products.

The hard truth is that sometimes…the almighty dollar is the bottom line. If public opinion supports non-GMO products – those big companies want to be ready. If it doesn’t help them make more money, they probably won’t go through the trouble.

Yet the good news is, it certainly seems that as consumers, we have a say and maybe even some control in how our food is grown, processed and manufactured. Voting with your dollars actually seems to work, and sometimes corporations listen when groups of consumers speak up loudly enough.

However, we also need to continue to hold the companies producing our food accountable to the commitments they make.

Remember, the term “all-natural” on product packaging can be very deceiving. Essentially, the FDA allows any product to be labeled as natural if it has no artificial colors, flavors or synthetic substances. That does not mean it is organic, non-GMO, preservative free or pesticide free.

In fact, non-GMO does not necessarily mean organic, and gluten-free foods tend to use GMO ingredients more often than not. That’s an unfortunate side-effect of many gluten-free products using genetically-modified corn as a substitute for wheat.

If you really care about the quality of your food, you’re going to have to put up a fight. But it’s a fight worth fighting.

What Do You Think?

Is the situation surrounding food production in the United States changing for the better?

Do you trust major brands starting to offer options that are organic, gluten-free and non-GMO? Or do you think large corporations will eventually ruin what could be a good thing? When natural/organic brands get acquired, does that make them sellouts?

Are you actually worried about GMOs, or is it something that you think is being overblown?

We’ve got a lot of questions and we’d love to hear your opinions! Leave us a comment below and let’s start a conversation!

Natural Healthy Concepts proudly offers many supplements and other natural products that are GMO-free. If you need help finding such a product, don’t hesitate to contact our customer service reps so they can point you in the right direction. Call us at 1-866-505-7501.

Here are some of the natural health brands offering verified non-GMO products*:

Get products from all of these trusted brands delivered to your home with free shipping!

Â Watch a Video on Potential Issues with GMOs

*Not all products from brands listed above are necessarily non-GMO verified.

5 Ways to Use Aloe Vera for Healthier Living
Workout Wednesday: The Muscle-Girl Circuit