You are here: Home › Our Blog › Best Watermelon Tips, Benefits And Recipes
By Ashley Steinbrinck on August 2, 2014 in Health Tips, Healthy Recipes 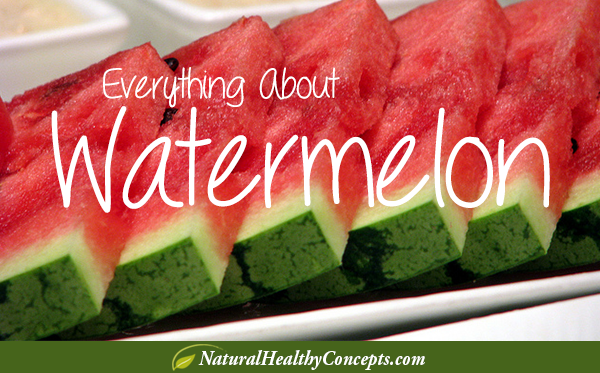 Watermelon is a popular choice among fruits. Especially in the summer. It’s refreshing, sweet, crisp and hydrating being made up of 92% water!

It’s so well-liked, that there’s even a National Watermelon DayÂ onÂ August 3rd each year. But besides the blissful taste and popularity, there are some other things to learn about watermelon.

Like how to pick a good one, the simplest way to cut it, how the seedless melons are made, health benefits and fun recipes to try.

How to Pick the Best Watermelon 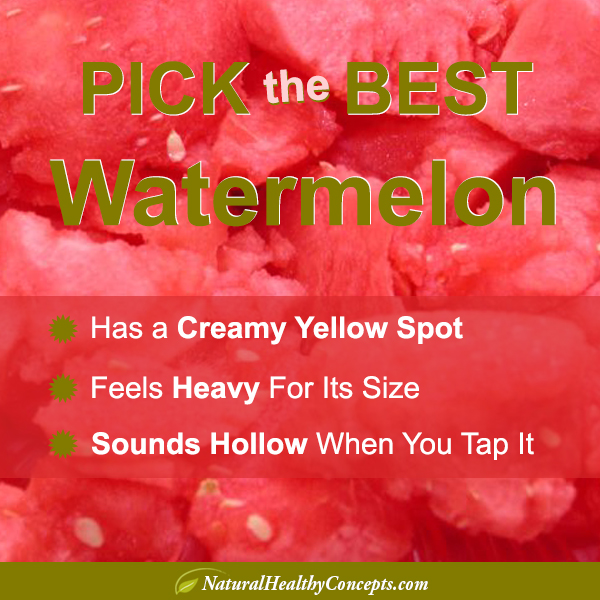 IÂ absolutely can not stand mealy watermelon. You know what I mean, right? It feels all fuzzy and mushy. Until I learned the trick to picking the perfect watermelon, it seemed my luck was always terrible when it came to scoring a nice crisp, sweet one that wasn’t overripe.

So – remember these three tips when you choose your next melon:

The Best Way to Cut a Watermelon

I don’t know about you, but I’ve never really learned how to properly cut fruit and vegetables. But it seems that no matter what you’re chopping up, there’s always a better way to do it. That’s what makes the internet such a resourceful tool. When you slice a watermelon, do you start by cutting it in half?

That’s how I used to do it too. But – after watching this great how-to video from LEAFtvÂ created byÂ bloggers Geri Hirsch and Erin Falconer, I will take this approach from now on.

Just don’t forget to wash your melon before you cut it. That way any germs and bacteria on the outside won’t travel from your knife to the inside.

Now that you have seen the best way to cut a melon, I hope it saves you some time next time. If you really want to save time, you can try to master the technique like the guy in this video from WIMP.com has.

Obviously he’s had a lot of practice…

Watch as he cuts this watermelon in just 20 seconds!

Pretty amazing, isn’t it? I would probably cut my hand off trying to slice my melon like he did. But if you can beat 20 seconds, you ought to let us know!

How AreÂ Seedless Watermelons Made?

I remember eating watermelon as a little girl. Half the fun was being able to see how far you could spit the seeds!

What’s up with humans always trying to change the way nature intended things. Why did scientists have to mess with our perfectly created watermelons in the first place?

It usually boils down to the faster-bigger-betterÂ type society we live in today.

So here we go again… just another health controversy. Is seedless watermelon bad for you? Or not?

Some people think they had to be genetically modified somehow if they aren’t in their true natural state. But is that the really the case?

As it turns out, seedless watermelon breeders treat young watermelon plants with a chemical called colchicine, which manipulates the chromosomes in a way that prevents fertilization from happening. Since fertilization is prevented, the hard black shell (aka testa) do not form.

Plant scientist, Tracy Kahn, confirms – in an interview with NPR – that this genetic manipulation during “plant sex” is like the watermelon version of the mule.

…Okay, so I get that plant biologists have created a hybrid sterile version of watermelon. But – what about that colchicine chemical? Is that safe to use? Are we essentially consuming a doseÂ when we eatÂ seedless fruits?

I did some research, and found that the chemical comes from a poisonous plant, that dates back to ancient Egypt as a drug treatment forÂ gout and a variety other health conditions. But a dose of just 7 mg of cholchicine can actually kill you.

In an NPS MEDICINEWISE publication from 2010, it tells us that low doses of colchicine can cause gastrointestinal toxicity.

“Vomiting and diarrhoea are the first signs of colchicine toxicity, and may precede rare adverse effects including muscle damage, neuropathy, multiple organ failure and bone marrow suppression.Â Patients with renal or hepatic impairment may be particularly susceptible to severe colchicine toxicity.”

Have you ever gotten diarrhea from eating too much watermelon? I know some people who have, and that makes me wonder…

There are also multiple drug interactions and grapefruit juice can even increase the risk for toxicity. So, how do we know if we’re consuming colchicine when we eat seedless hybrid watermelons?

I’m sorry, but I couldn’t find the answer. I guess that leaves it up to you to decide. God provided us with instincts, just like He provided us watermelons with seeds. So, now you just have to go with your gut on this one. 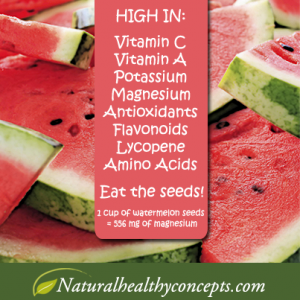 Guess what I recently learned about the benefits of watermelon seeds?

Yes, you can eat them. And I promise you won’t grow a watermelon in your tummy. Your mom just told you that to trick you.

The seeds of a watermelon have a ton of magnesium! In fact, one cup of watermelon seeds (like you’d even be able to find that many to eat) have 556 mg of magnesium – an essential mineral that most of us are deficient in. Believe me, magnesium deficiency is nothing to mess around with. We need to get enough, or health issues and crazy symptoms that mimic ADHD will start popping up.

The watermelon itself is also high in magnesium. As well as Vitamins C and A, potassium, antioxidants, flavonoids, lycopene and amino acids.

Fun Recipes to Try With Watermelon

There are so many different ways to eat a watermelon. Did you know you can grill it? Fry up the rinds, and even make salsa and frozen treats out of it? Take a look at these fun recipes you can try with your next watermelon!

How to Grill it

Have you ever tried grilled watermelon? Did you even know you could grill it? It makes theÂ flavor extra sweet and a little smokey.

Watch as chef, John Gruver from Giant Eagle shows us how to grill it right. Then he tops it off with some fresh basil, feta cheese and balsamic. It looks amazing!

How to Fry Up The Rinds

Yes, a watermelon rind is actually edible. It adds a mild sweetness to a stir fry recipe and takes on the same texture as a zucchini. You do need to start by peeling the green part. Whatch as Ochikeron shows us how to make Chinese-style stir fried watermelon rind. (FYI – you can use portobello mushrooms or chicken instead of pork)

How to Whip up Some Watermelon SalsaÂ 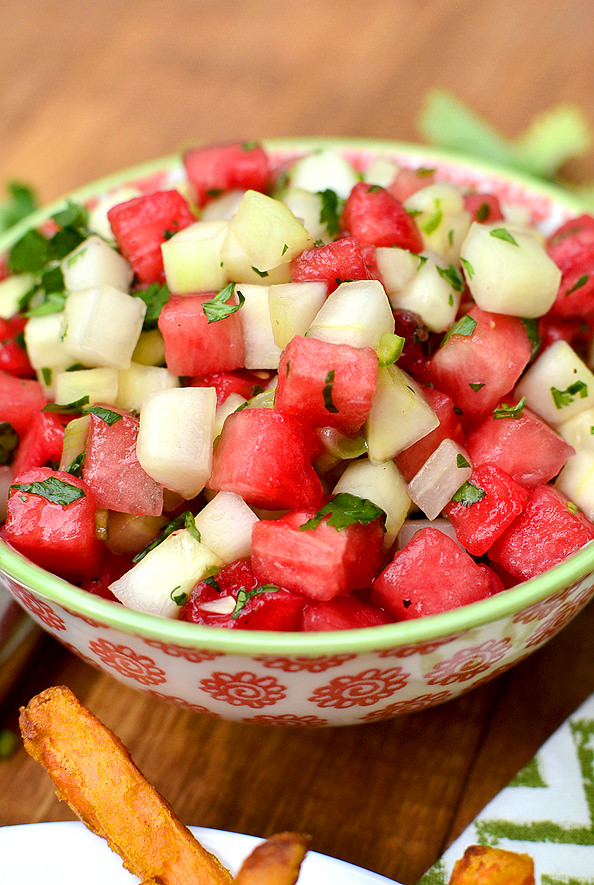 You could use this salsa as a garnish on chicken, or serve it with some tortilla chips.

This recipe is courtesy of Iowagirleats.com. Thanks for this one Kristin!

How to Make Watermelon Flax Pops 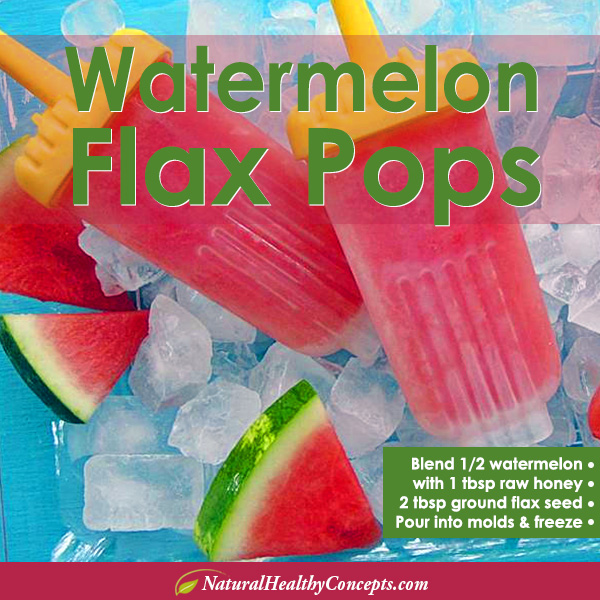 Just blend up half of a watermelon with a tablespoon of raw organicÂ honeyÂ and 2 tablespoons of groundÂ flaxÂ seed.Â Chia seedsÂ could be used if you’d prefer. Then, pour theÂ mixture into popsicle molds and freeze for about one hour.Â That’s it! So easy and super good.