You are here: Home › Our Blog › Benfotiamine Dosage: Why Vitamin B1 Matters
By Angela Halderson, RD on February 13, 2018 in Nutrition Supplements 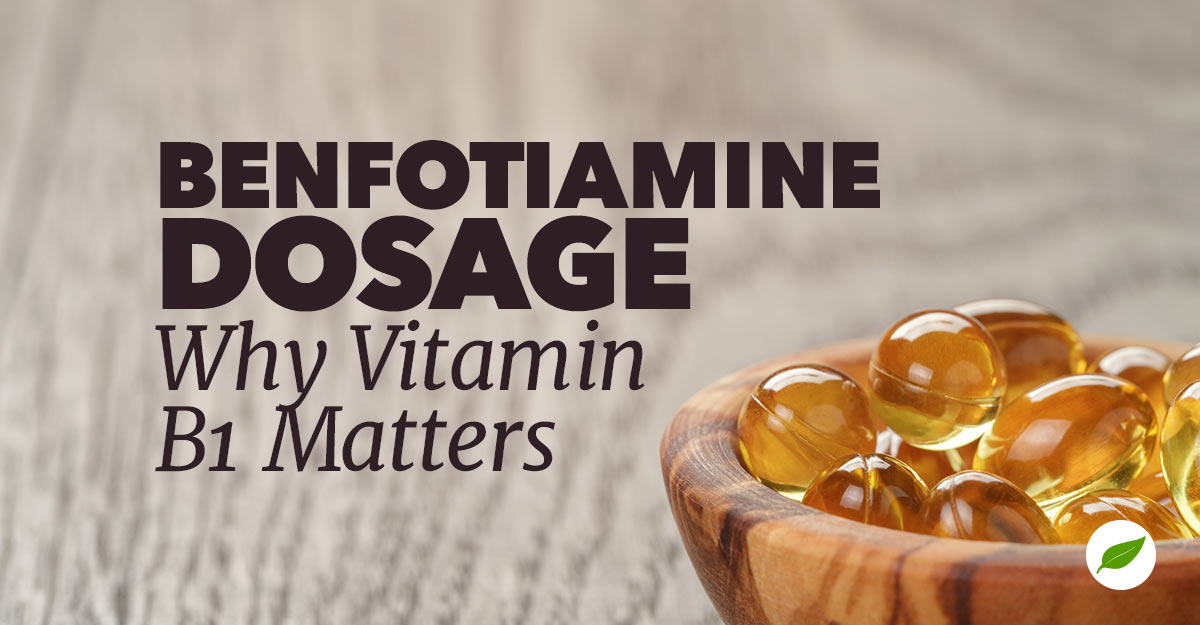 Finding the right vitamin or nutrient to bolster your lifestyle is only half the battle. Using the correct dosage when taking these supplements is necessary to maximize potential benefits for your body.

Thiamine is an essential nutrient that the body can gain in proper levels only through diet and supplementation. Just as with other supplements, the correct dosage of vitamin B1, known as thiamine, is needed to make the best use of its potential benefits.

There are factors to consider when choosing an effective dosage. While too low a dose may prove altogether ineffective, too high a dose may lead to unnecessary side-effects. Thankfully, there have been enough studies featuring the thiamine supplement that conclusions can be drawn about a proper benfotiamine dosage.

Benfotiamine is a synthetic form of thiamine. Its value lies in its fat solubility, versus the water solubility of pure vitamin B1. Its chemical structure allows thiamine to reach muscle, brain, liver and kidney tissue more effectively in the benfotiamine form.

A benfotiamine supplement may also provide benefits for supporting blood sugar levels already within the normal range. This is due to its being a â€œtransketolase activator,â€ meaning the supplement might support the production and normal function of red cells in a healthy cardiovascular system.

A study that examines benfotiamine in the treatment of diabetic polyneuropathy, patients were given two, 50mg benfotiamine tablets four times daily (for a total of 400 mg). Researchers then assessed these patients against a control group that received a placebo.

Researchers note that “more patients in the benfotiamine-treated group than in the placebo group considered their clinical condition to have improved.” The study also notes that “the differences between the groups cannot be attributed to a change in metabolic parameters since there were no significant alterations in the HbA1 levels and blood sugar profiles. The body mass index of the two groups did not differ.”

While the research is not definitive, the study concludes that benfotiamine may provide potentially beneficial medicinal properties to select groups of people in a clinical setting, including temporary relief from occasional pain.

In a study that examines the biological equivalence of three thiamine preparations, patients were given 100 mg of benfotiamine, then observed for a ten-hour period. Researchers assessed the resulting thiamine levels of these patients in contrast to those who took the other two preparations.

Researchers note that â€œa more rapid and earlier increase of thiamine in plasma and hemolysate was observed.â€ The researcher’s credit benfotiamineâ€™s excellent absorption characteristics as the reason for its superior performance in the study.

In another study, researchers compared the therapeutic effectiveness of a vitamin B combination, which included Benfotiamine, in medium and high doses, with a monotherapy of benfotiamine. For the purposes of this study, a benfotiamine dosage consisting of two capsules, four times daily (for a total of 320 mg) is considered â€œhigh,â€ while a dosage of one capsule, three times daily (120 mg) is considered â€œmedium.â€

The researchers conclude benfotiamine is most effective â€œin large doses, although even in smaller daily dosages, either in combination or in monotherapy, it is effective.â€