You are here: Home › Our Blog › Chicken vs. Beef Bone Broth: What’s the Difference?
By Theresa Groskopp, CN on July 27, 2017 in Diet, Health Tips, Nutrition Supplements 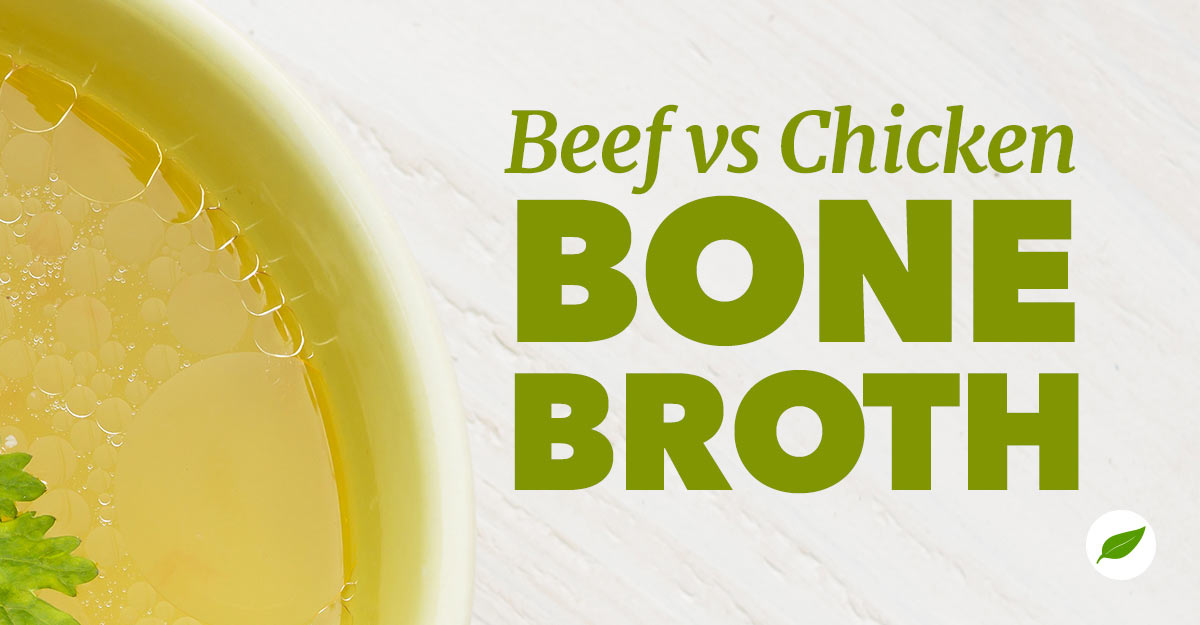 Learn why you should incorporate chicken or beef bone broth into your healthy lifestyle.

Thereâ€™s a lot of buzz about the potential health benefits of bone broth these days. And there are just as many questions. Are broth, stock, and bone broth the same thing? Whatâ€™s the difference between beef bone broth and chicken bone broth? Should I incorporate bone broth into my healthy lifestyle? Read this blog post to learn more!

Years ago, when culinary artists and chefs-in-training were learning about broths and stocks and the differences between the two, they were taught that broth is made from cooking vegetables and meat in water, which was used as the base for many delicious soups. Stocks, on the other hand, included the addition of roasted bones. Epicurious Food Director Rhoda Boone was one of those who learned the difference in culinary school and remembers those lessons well. Boone writes in an article based on the topic, though, that in the time since her schooling, â€œeverything seems to have changed.â€ She makes note that the the two terms â€“ broth and stock â€“ seem to be used as one and the same right now.

After some research and what must have been heated discussion with colleagues and fellow foodies, Boone offers up the following differences between broth, stock, and bone broth:

Broth: With the shortest cooking time â€“ two hours or less â€“ broth includes vegetables, herbs, and meat, and might even include some bones. Broth becomes the foundation of many lighter soups and can even be served as soup as-is.

Stock: Stock is simmered longer than broth, up to six hours. Stock includes the same vegetables and herbs as broth, along with roasted bones that might still have meat connected to them. Thicker than broth, stock serves as the creation for many gravies and sauces.

Bone broth: The longest cooking time of the three, bone broth can be simmered up to 24 hours or even longer. (Beef bone broth may need to cook as long as 36 hours to release the most nutrients.) As Boone points out, bone broth is a bit of a hybrid between broth and stock: long-simmered, with a few scrap vegetables and herbs and made with bones that may still have meat attached, like marrow, knuckles, and feet. The goal of the long simmer time â€“ no matter what type of bones are used â€“ is to release the minerals from the bones. Just be sure not to add too many ingredients! Onions, garlic, and black pepper will usually do the trick.

Bone broth can be made from beef, chicken, lamb, pork, veal, or even fish bones. For many, the difference may simply be a preference of taste. But The Kettle & Fire Blog points out several other differences between the most popular two types of bone broth â€“ chicken and beef:

How to Add Bone Broth to a Healthy Lifestyle

The potential benefits of adding beef bone broth, chicken, or other bone-based broths to your healthy lifestyle seem almost be too good to be true. Bone broth is reported to support a healthy immune system, healthy aging and joints, healthy-looking skin, and even benefit your hair and nails! It may also help to support energy and may help lubricate joints.

If youâ€™re too busy to cook your own chicken or beef bone broth at home, you can still enjoy the potential nutritional benefits of bone broth in a modern protein powder suitable for those following the paleo diet, or for those interested in trying bone broth without the time commitment in the kitchen. In addition to being a source of protein, bone broth powder contains nutrients designed to support muscle health before and after a workout. It also contains collagen, glucosamine, and other nutrients that support optimal health.

Shop Natural Healthy Conceptâ€™s wide selection of bone broth protein powder from Ancient Nutrition, and see if it makes a difference to your health. All orders in the U.S. receive free shipping!

If youâ€™ve added bone broth to your routine, weâ€™d love to hear about your experience. Do you have a preference for beef bone broth or chicken bone broth? Do you have a favorite recipe? Please share your thoughts in the comments below!

2 Responses to Chicken vs. Beef Bone Broth: What’s the Difference?