You are here: Home › Our Blog › B12 Deficiency – A Silent Epidemic [Infographic]
By Theresa Groskopp, CN on March 25, 2013 in Health Tips, Nutrition Supplements 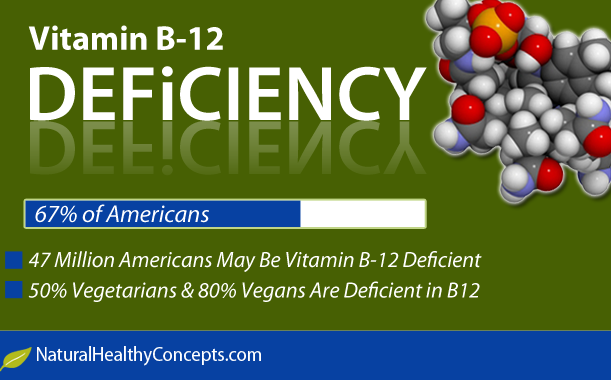 I am a vegetarian; not that interesting in itself really. But recently I found out that my dietary choice has left me at higher risk of falling victim to a silent epidemic: B12 deficiency.

And being honest, before this revelation, I don’t think I had ever even heard of B12.

But it’s not just me, or vegetarians in general, that faces this threat. As many as 47 million Americans may be suffering in this epidemic — experiencing forgetfulness, fatigue and depression for nothing more than a simple B12 deficiency.

This little gem of a vitamin plays a critical role in maintaining the health of your nervous system, as well as in the production of red blood cells and DNA. Without it, your body simply cannot repair itself. And too long without sufficient B12 can permanently damage your nervous system.

And some even argue that “at least some of the symptoms we attribute to ‘normal aging’ — such as memory loss, cognitive decline, and decreased mobility — are at least in part caused by B12 deficiency”.

But back to why my being a vegetarian matters in this tale. My risk is raised because this vitamin is only found in animal foods, including meat and dairy products.

Strictly speaking, B12 is produced by bacteria, and animals incorporate it into their bodies. You can then get it by eating animal or bacterial products. It is commonly found in such foods as fish, shellfish, meat, eggs and dairy products.

Some vegans argue that yeast makes the vitamin; however, this is not the case, although nutritional yeast generally has B12 added to it, so it is a source.

Now, I do eat dairy, but even this may not protect me. Â Vegetarians, like me, who eat eggs and milk products typically consume less than half the adult recommended dietary allowance (RDA) of vitamin B12, according to a report in Nutrition Reviews.

In fact, studies consistently show that as many as 50% of long-term vegetarians and 80% of vegans are deficient.

Meat Eaters in Danger, Too

However, B12 deficiency affects more than your friendly neighborhood vegetarian.

WebMD says a lot of people cannot absorb this vitamin from the foods they eat.

This can be caused by:

However, in general, the following groups are at risk for B12 deficiency:

And while older people are generally considered to be more at risk, because aging bodies struggle to absorb this vitamin, some research has found low B12 levels to be as common in younger people.

Normal Level May Not Be Good Enough

Many B12 deficient people in the US actually have what are described as ‘normal’ levels of B12.

This may be partly explained by the fact that what is considered normal in the US, between 200 pg/mL and 350 pg/mL, would be regarded as a health problem in Europe and Japan, where the lower limit for B12 is between 500-550 pg/mL.

Indeed, in Japan and Europe, they regard their lower limit as the level associated with psychological and behavioral manifestations, such as cognitive decline, dementia and memory loss.

Do You Have It?

We’ve pretty much gone over the best known symptoms of B12 deficiency: fatigue, memory loss, depression.

But there is a whole lot more to it, unfortunately, and that is part of the problem. B12 deficiency tends not to be at the forefront of medical practitioners’ minds, and the symptoms are often considered to be part of some other underlying condition.

Ultimately, we can categorize the indications into neurological, intestinal and anemia related symptoms and manifestations.

So, people with this deficiency may experience excessive fatigue, pallor, breathlessness, numbness and tingling of the hands and feet, weakness of the muscles, sensory impairment, nausea, vomiting, diarrhea, poor memory, or poor balance.

The Pernicious Anaemia Society has published a complete symptom checklist if you want to find out more.

Really, What Harm Can it Do?

If you are still not convinced about the importance of this vitamin, consider this case discussed by health.harvard.edu

“Over the course of two months, a 62-year-old man developed numbness and a ‘pins and needles’ sensation in his hands, had trouble walking, experienced severe joint pain, began turning yellow, and became progressively short of breath. The cause was lack of vitamin B12 in his bloodstream.”

The site says it could have been worse, citing an article in the New England Journal of Medicine: “Severe vitamin B12 deficiency can lead to deep depression, paranoia and delusions, memory loss, incontinence, loss of taste and smell.”

All is Not Lost if You Are Deficient

The good news with B12 is that you do not need to eat it every day. Fortunately, your body can store it in tissues, but you do need to eat it regularly enough to maintain healthy levels. Or you can experience anemia, fatigue, emotional problems and memory loss.

And early detection and treatment of problems is critical.

A mild B12 deficiency can be corrected with a standard multivitamin.

To get a bit sciency, cyanaocobalamin is the most common form of B12 supplementation in the US. However, Â hydroxycobalamin, more common in Europe, may actually be superior. And another form, methylcobalamin, may be superior to both.

With B12, you really are better served ensuring you do not have a deficiency than looking to repair the situation after you start to Â experience symptoms.

As for me, I have added a daily B12 supplement to my daily regimen.

Here’s an infographic to share with your friends so they are aware of this common but silentÂ epidemicÂ as well.

But if you are still not convinced about the threat, here is a very disturbing documentary exploring the issue of B12 deficiency:

So if you think you may be B12 deficient or want to guard against the threat beacuse of your lifestyle, our best-selling B12 supplements include

Activated B-12 Guard, Perque –Â delivers vitamin B-12 in its superior, activated hydroxocobalamin form, which is more expensive than other types but lasts longer and raises B12 blood concentrations higher.

Vitamin B12 Liquid,Â 1 Oz, Apex Energetics –Â a highly absorbable sublingual methylcobalaminsolution of vitamin B12, which allows it to avoid the GI tract and the liver

B12 Active Cherry Flavor,Â Integrative Therapeutics — aÂ delicious chewable tablet featuring the methylcobalamines form of B12, meaning your body does not need to convert it

B12 Strips, Advanced Delivery System — each fast-dissolving strip contains 2,000mcg of B12 as methylcobalamin

Methyl B-12 1000 Mcg,Â Jarrow Formulas — this formula provides B12 in a form that you body canÂ better absorb and retain than other types.

4 Responses to B12 Deficiency – A Silent Epidemic [Infographic]