You are here: Home › Our Blog › 6 Awesome Squash Recipes for Your Fall Feasts
By Theresa Groskopp, CN on September 12, 2014 in Healthy Recipes 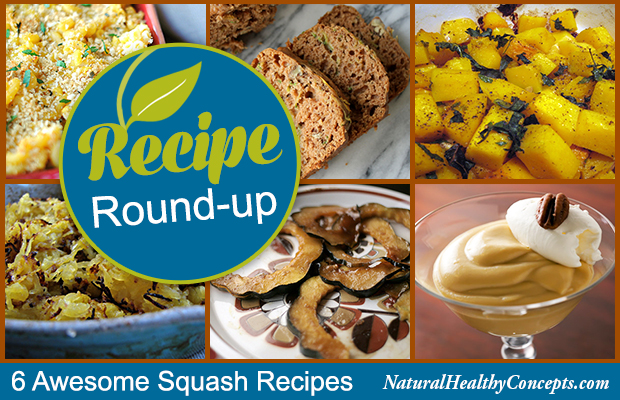 Do you pass by the squash in your grocery store’s produce section and wonder – “What the heck would I do with that?”

Do you actually grow squash in your garden, but you’re at a loss for creative ways to cook them?

Squash is actually a very versatile food that you can use in many different ways for many different dishes. If the only way you prepare squash is mashed up in a big bowl, this week’s Recipe Roundup will give you some great ideas. Squash can be used as a sumptuous side, the main part of your mail and even for dessert.

Check out the recipes we found from around the web… 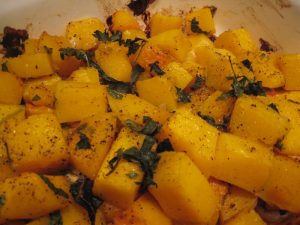 Angela – from the recipe blog OhSheGlows.com found a butternut squash recipe to rave about. In fact, she insists that this is “the best way you will ever eat butternut squash.”

I typically bake butternut squash and then mash it up with some seasoning like brown sugar and cinnamon. But in this recipe, Angela cuts up the squash into 1-inch cubes.

She then tosses the cubes in a mixture of olive oil, minced garlic, parsley, salt and pepper.

After baking – you can sprinkle on and mix in some Parmesan cheese. Angela switched to a vegan diet since originally posting this recipe. So she has come up with a vegan version of grated Parmesan, which you can find on the same blog post. It calls for toasted sesame seeds and almonds. 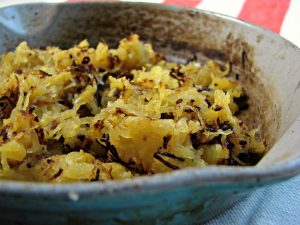 Squash isn’t typically a food you think of for breakfast. But this recipe gives you a way to swap out high-carb potatoes with spaghetti squash for a healthier version of hash browns.

Spaghetti squash is a very unique plant. It gets its name because, when baked, the inside of it comes out looking much like spaghetti noodles. Lots of people use it as a replacement for pasta.

But using it for hash browns is an awesome idea!

Lauren from the paleo diet blog Empowered Sustenance says this recipe is “like clean underwear.” She also adds that one nice benefit is you save your knuckles the trouble of grating potatoes.

Lauren found that a common problem is getting the squash to have that nice, crispy crustiness, which makes for good hash browns. She discovered that if you use a kitchen towel wring out as much moistureÂ from the squash as possible, it turns outÂ  much better. Surprisingly, the squash will be reduced in volume by about half. 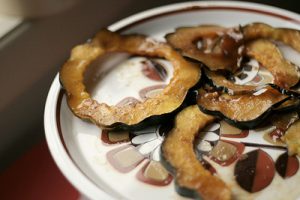 One of the downsides to making squash is how long it can take to bake. It’s usually in the oven for as long as an hour.

Alice and Summer from the blog Bread & Honey shared a recipe for acorn squash that cuts down cooking time significantly.

The directions call for slicing the unpeeled acorn squash into rings that are about a half-inch thick. You coat them in butter and seasons them with brown sugar, salt and pepper.

Because the squash is cut into relatively thin slices, it finishes baking much faster. They’ll be in the oven for about 20 to 25 minutes instead of an hour or more.

The author also confesses that she’s not a big fan of squash, but this recipe was so enjoyable, the squash was getting eaten before it could even be photographed for the article.

Another little bonus – the squash rings have a unique look for home chefs who care about the appearance of their plates. 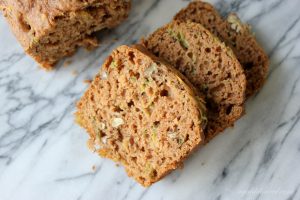 Zucchini is considered a summer squash because of when it is typically harvested. But you can easily find them all year long.

They were the most prolific producers in my backyard garden this year. So I have plenty to work with.

Zucchini bread is one of the most popular ways to use this variety of squash. But bread is not the best choice if you have people in your family with a gluten sensitivity.

Alison from the recipe blog A Girl Defloured (get it?) offers up a gluten-free way to bake some zucchini bread.

Her recipe combines gluten-free flour and almond flour with grated zucchini and chopped walnuts. Plus, it gets a deliciously sweet flavor from cinnamon, brown sugar and vanilla extract. She even used coconut milk to make the recipe both gluten-free and dairy free.

Alison says she likes to have this bread toasted with a cup of hot coffee for breakfast. 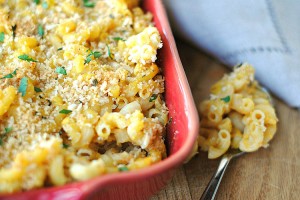 Kelly from the popular recipe website Eat Yourself Skinny has a way to mix butternut squash into a macaroni and cheese casserole.

She says it can cut 500 calories from the typical mac & cheese dish. But it is still creamy, cheesy and flavorful. Another benefit – kids who love their mac and cheese will also be getting some healthy vegetables with their meal.

Since butternut squash has that nice orange color – it blends right in – so picky eaters (young and old) won’t notice a thing.

Kelly uses fat-free Greek yogurt to keep it creamy. She chooses Gruyere and Romano cheeses – which no doubt create a much more complex flavor than the powdered cheese or goo you get with store-bought stuff.

As you can see – the finished product also looks a lot more appetizing than your average bowl of Easy-Mac.

Another bonus, Kelly says the dish can last for days and freezes well too. The total calories in a normal serving size is right around 350. 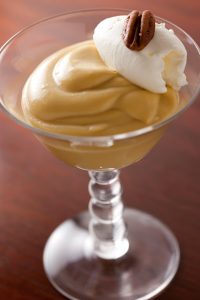 Squash works great as a dessert. That shouldn’t come as much of a surprise since it is often a sweet side dish at Thanksgiving and other holiday feasts.

But a pudding made of squash? We had to add this one to the list!

Nicole from the blog Pinch My Salt says this recipe is perfect for people who love pumpkin or sweet potato pie.

Using roasted butternut squash and then turning it into a squash purÃ©e, you create the base for the pudding. Of course, it also includes half and half, egg yolks and plenty of brown sugar – making it velvety, rich and sweet.

But this is a dessert! Just keep telling yourself how healthy the squash is.

After it’s all finished – Nicole tops things off with a dollop of whipped cream and a toasted pecan. This is an autumn treat that will really impress dinner guests.

The Health Benefits of Eating Squash

Wondering how squash keeps you healthy and strong? Wonder no more…

One of the biggest advantages of eating squash is the carotenoids it provides. For instance.Â  squash gives you a significant amount of Vitamin A – which includes related plant-based nutrients like beta-carotene, lutein and astaxanthin. 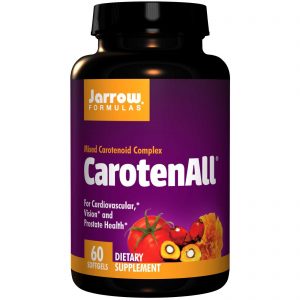 Those carotenoids are also what give winter squash flesh their orange and yellow appearance.

Carotenoids are potent antioxidants. That means they can help fight the oxidative damage free radicals could impose on your health. They’re known to support vision, cardiovascular health, immune system strength and more.

Both winter and summer squash give you the mineral manganese, which can help your body process fats, carbohydrates, and glucose. Manganese also seems to help women find relief from common PMS symptoms.

The folate found in winter squash is an especially important form of nourishment for pregnant women.

Squash also contains a nice amount of fiber, which can protect the health of your colon and promote normal digestion. 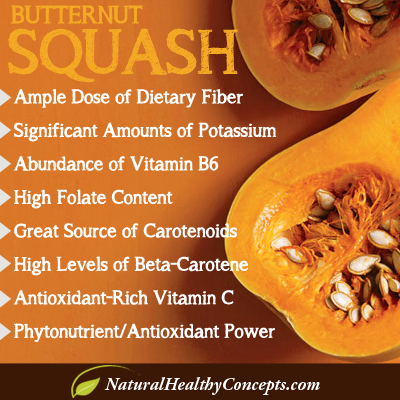 Of course, if you simply don’t like squash – or don’t have any around – you can make sure you’re getting all of these nutrients through smart supplementation. While the best thing to do is give your body nutrition through a healthy diet, taking supplements can be another good way to make sure you get the right nourishment.

Now that you know why you should eat squash – get busy trying out some of these recipes.

We’d like to hear about your favorite squash dishes. We know there’s much more to make – including squash soup – which didn’t make the list. And I’m interested in trying out this recipe for grilled butternut squash too.

Leave us a comment and link to your best squash recipe below!

All images used in this post are courtesy of the blogs from which the recipes were found.