You are here: Home › Our Blog › Andrographis Side Effects and Potential Benefits
By Theresa Groskopp, CN on November 18, 2017 in Nutrition Supplements 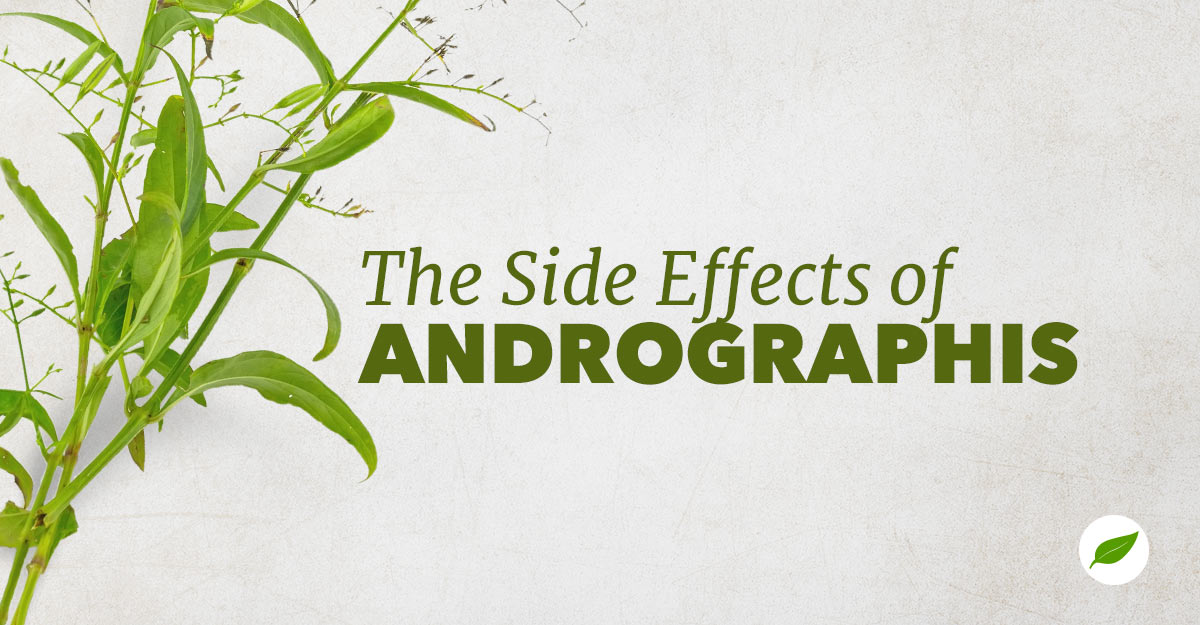 Traditional Eastern medicine, sometimes known as ancient Chinese medicine, is a philosophy of medical practices developed over centuries. These systems of medicine have been essential to the development of acupuncture, massage, and exercise, and the use of plants and herbs to address healthy challenges.

While somewhat unknown in Western cultures, some elements of traditional Eastern medicine are becoming more popular around the globe. According to practitioners of ancient medicinal system, plant- and herb-based medicine are believed to have lower side effects than their synthetic counterparts. Some plants, like andrographis, are well documented for their apparent lack of side-effects in the body.

While andrographis side effects may be minimal, the herb has been shown to have an altering effect in the liver. As a result, taking this herb is likely to affect the liver and systems that rely on its function.

In fact andrographis side effects may provide positive support for the body. Research shows that andrographis supports the development of liver cells because the herb provides compounds that support free radical scavenging antioxidant. These antioxidants seek to support the liver from metabolic waste, alcohol, and environmental toxins.

Andrographolide, a major constituent of andrographis, has been shown to support the production of bile in the liver. Andrographolide normally requires that andrographis undergoes an extraction process to yield this compound. If taking whole andrographis, the body may not benefit from the compound because the digestive system is unable to absorb the herb properly.

As a result, the expected flow of bile may not occur. An insufficient level of bile flow may lead to vitamin deficiency and other digestive complications. But an excess of bile flow is not helpful either. Due to the uncertainty of taking andrographis or andrographolide and its effect on the liver, consult a doctor before taking the whole herb or supplementing your diet.

Effect on Appetite and GI Sensibility

Traditional Chinese medicine says that when eating too many cold foods or not enough protein a person may encounter a â€œstomach cold and deficiency.â€ Considered a cooling herb with bitter and cold properties, andrographis may support healthy regulation of various body systems, but someone taking andrographis should take care that the supplement doesnâ€™t have too much of a cooling effect. Possible andrographis side effects may also include loss of appetite and gastrointestinal discomfort.

While most potential andrographis side effects are internal, some can be observed with the naked eye. A possible undesired result of taking andrographis is a general irritation of the skin called drug eruption. While most occurrences of drug eruption are considered mild, you should take caution and notify a physician if irritations of the skin is observed. See our article to better understand the impact andrographis can have on the immune system.

Caution for Children and Pregnant Women

Andrographis should be given to children only with extreme caution. However, one study with 130 children found that there were no side effects. Kan Jang, a combination of andrographis and Siberian Ginseng that is commonly taken to treat cold symptoms, was reported to be â€œwell-toleratedâ€ by this study group. Other evidence suggests andrographis is â€œpossibly safeâ€ in children when taken by mouth over brief periods of time.

Pregnant women should not be given andrographis under any circumstance. In fact, andrographis sometimes plays a role in family planning in Eastern medicine. Studies on mice have indicated that andrographis relaxed the animalsâ€™ uteruses and discouraged fertility. This is further evidence that child-bearing women should steer clear of andrographis.

Andrographis must always be taken in the correct dosage as prescribed by a medical professional. Too high a dose can certainly lead to adverse effects. While andrographis has a wide range of potential health benefits, one must be careful when administering the supplement.