You are here: Home › Our Blog › Andrographis Dosage Suggestions For Optimal Support
By Theresa Groskopp, CN on February 23, 2018 in Diet, Nutrition Supplements 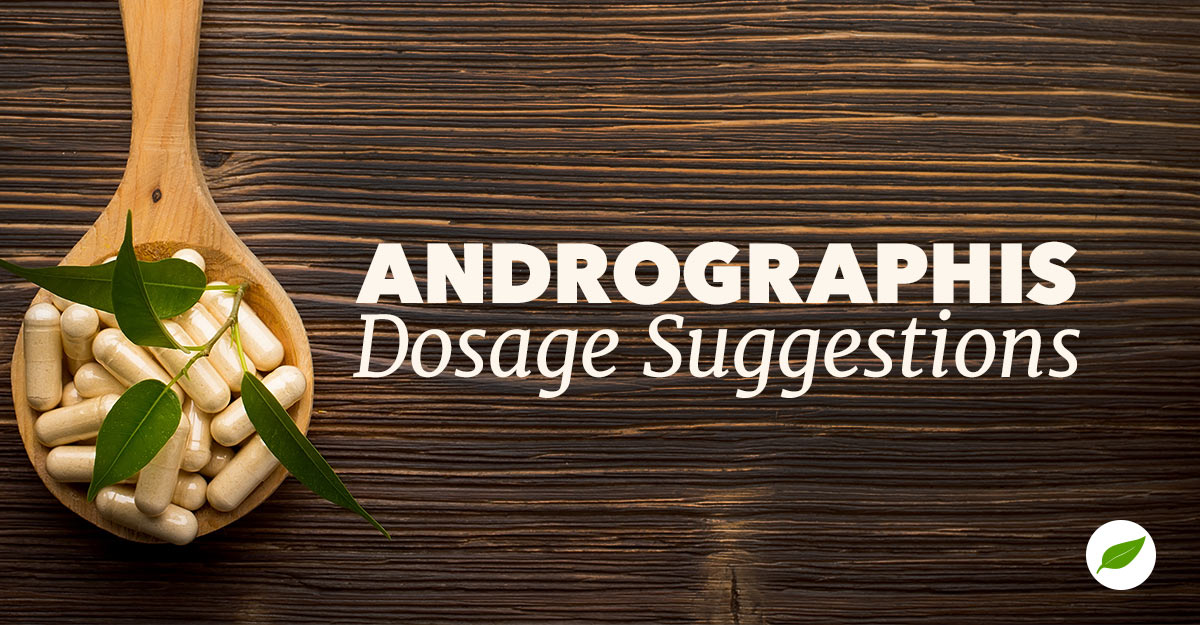 Andrographis is now used world-wide. It has entered the consciousness of Western medicine in the last few decades as it tries to harness its antioxidant properties that provide immune system support, and may provide temporary relief for occasional pain. The potential benefits of Andrographis as well as its major active consultant, andrographolide, are a frequent focus of study in Western medicine.

A correct andrographis dosage for personal use should be determined by several factors. First, consult with a medical professional to determine if any existing condition may conflict with taking andrographis. Second, is the focus of dosing this herb is for the potential benefits that may aid health and wellness in the future, or are you seeking immediate temporary relief.

The leaves of the andrographis plant must be turned into an extract in order to make it consumable. Chloroform and methanol are two options of extracting the andrographis leaf, while a water-based extract has been used to study potential antioxidant benefits.

In a water-based extract (aqueous), andrographis is able to encourage the activities of antioxidant defense enzymes. Two of these enzymes are catalase and superoxide dismutase. Antioxidant enzymes are important in defending the body against free radicals, which can damage cell proteins, DNA and cell membranes.

A 100mg dosage of andrographis was used in a test to test antioxidant activity.

One of the best potential benefits is Andrographisâ€™ ability to support the immune system. Some studies focus on how andrographis helps to regulate the immune response to foreign substances in the body.

The immune is made up of many different systems and components, including macrophages. These white blood cells patrol the body and help to regulate to what degree the body responds to foreign substance. However, the immune system can â€œoverreactâ€ and create a negative state in the body. One study found andrographis helps to maintain a normal number of macrophages in the immune system. The research concludes that andrographis may provide an optimal immune system response.

Andrographis has a host of unique biological properties that may have potential benefits in the body, including support for temporary relief from occasional pain. In a study that examines the efficacy of andrographis for support of healthy joints and comfort, 60 patients were given andrographis three times daily for 14 weeks. When compared to patients that received a placebo, those that received andrographis noted positive changes in parameters for mobility, and may be a useful â€œnatural complementâ€ of other treatments.Â

Andrographis is also used in folk medicine to provide temporary relief from occasional elevated temperatures. When compared to supplements it may not have the strength of active agents of an aspirin, andrographis has been reported as potentially being a natural alternative to aspirin.

Due to a Western diet that includes highly processed foods, individuals are regularly looking to the potential benefits of herbs to fill nutritional gaps in their diet. While scientific research on andrograhpis continues, the plant extracts has been shown to serve as an everyday antioxidant, support the immune system, and even provide temporary relief from occasional pain. Ask a trusted medical professional about what may be an appropriate andrographis dosage for you.