You are here: Home › Our Blog › What do alcoholism and nutrition have in common?
By Theresa Groskopp, CN on April 8, 2011 in Health News, Health Tips, Nutrition Supplements 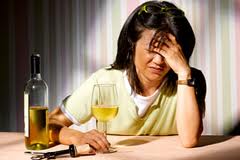 Did you know today is National Alcohol Screening Day? From the Screening for Mental Health website: “Held annuallyduring the first full week of April, National Alcohol Screening Day(NASD) is an outreach, education, and screening program that raises awareness about alcohol misuse and refers individuals with alcohol problems for further evaluation. The program is provided by nearly a thousand colleges, community-based organizations, and military installations world wide each year.”Â  You’ll find places to schedule an appointment in the website, but online screenings are available at any time.

If you’ve have ever suffered the hardship of a family member with alcoholism, you’re no doubtÂ familiar with Alcoholics Anonymous, more commonly referred to as AA. I’ve known aboutÂ AA for over thirty years as I’ve witnessed a family member struggle with with this debilitating addiction. I’ve asked myself over and over, whyÂ is itÂ some peopleÂ can maintain their sobrietyÂ and others seem forever condemnedÂ to the bottle?

Before we go further, let’s take a closer look at some statistics on alcoholism in the US:

In a 2006 articleÂ  in MSN MoneyÂ entitled “The 5 Most Expensive Addictions,” alcholism was rated number oneÂ with an estimated annual total cost of $166 billion

Knowing what I do about nutrition, I figured there were many dietary factors that influence a persons recovery from alcoholism – just think of the candida (yeast/fungus)Â issues alone, of an alcoholic, not to mention hypoclycemia!Â Â  Alcohol is a sugar, afterall.Â  So I went on the net and started researching and what I discoveredÂ was that Bill Wilson, the founder of AA, didn’t just develop the 12-Step program of AA, he was also a believer inÂ orthomolecular medicine and recognized that nutritionÂ could playÂ a key role in a person’s recovery.Â  HeÂ found that even though there were people whoÂ could maintain their sobriety, they often suffered from depression, anxiety, fatigue and more.Â  (Not exactly good news to the family ofÂ an alcoholic who thought getting them sober would make everything better!)

Bill WilsonÂ  had discovered the work of Dr. Abram Hoffer, MD, Ph.D, of Saskatchewan, and the therapeutic effects of Vitamin B3Â (Niacin) inÂ the treatment of schizophrenia, which included 10% who were alcoholic. Bill implemented a program of B3 supplementation with 30 members of Alcoholics Anynonymous in New York (they were not schizophrenic and were not drinking) and within about two months, 20 of them were relieved of all symptoms. That’s significant. What really ticked me off, however, after reading this valuable information was learning that when Bill took his study to the medical doctors on the International Advisory Board of AA, (which he started!) they essentially told him a layperson wasn’t qualified to be discussing “medical matters” like the use of vitamin B3! Wow, can you say arrogant? That was in the 1940s when doctors had virtually no training in nutrition – even now, the amount of nutritional training doctors receive is, well, pathetic.Â  But I digress…

Bill ended up parting ways with the International Board of AA, but his findings were eventually corraborated byÂ the studies of Dr. David Hawkins and by Dr. Russell Smith and the results were published inÂ the Journal of Orthomolecular Medicine.

Think about how manyÂ millionsÂ of people might have achieved more success in their recoveryÂ through AAÂ sinceÂ the 1940’s, Â ifÂ Â this nutritional component had been included in alcohol treatment programs.Â  This is tragic! Now we know so much more on nutrient deficiencies and genetic markers that can be addressed through nutrition and supplements, which is why Natural Healthy Concepts carries so many professional grade vitamins, minerals and amino-acids, that could helpÂ support someoneÂ facing an alcohol addiction. We carry many niacin products including this popular timed-releasedÂ brand from Ortho Molecular. If you’d like to read a book on the orthomolecular treatment of alcoholism,Â  here’s one you might try: Alcoholism: The Cause & The CureÂ . In addition, there are well respected physicians like Doris Rapp, MD, a specialist in environmental medicine and allergies, and best selling authorÂ  and nutritionist, Gary Null, PhD, who believe alcoholism is related to allergies.

It’s worth taking advantage of the alcohol screening to Â find out if you or a loved one is suffering from an alcohol or drugÂ addiction, but be vary wary of any treatments that say giving your loved ones more drugs (anti-depressants, anti-anxiety)Â is the answer!

3 Responses to What do alcoholism and nutrition have in common?