You are here: Home › Our Blog › 5 Nutrients That Can Help Kids Labeled With ADHD
By Ashley Steinbrinck on May 27, 2014 in Nutrition Supplements, Parenting 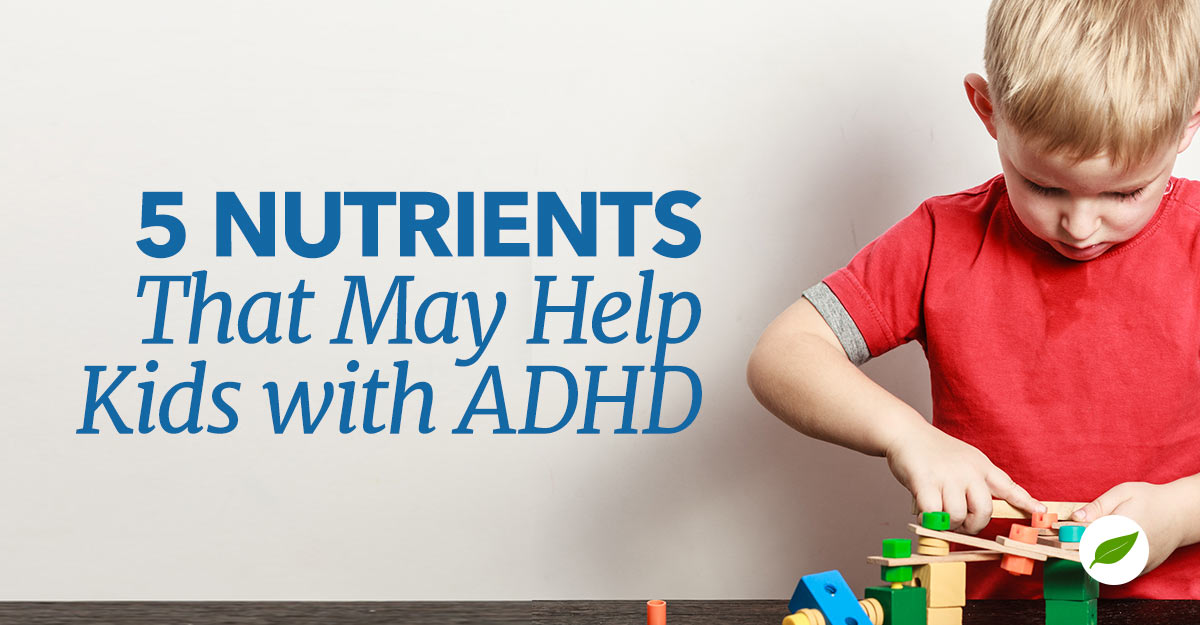 It’s unbelievable how much power foodÂ has.

Food actually has the ability to cause diseases or prevent them.

If we aren’t getting the essential nutrients we need from healthy foods – our bodies will react negatively. But becauseÂ everyone’s genetics and biochemical make-up is so unique, what’s considered healthy for you just might not be healthy for someone else.

For instance, nightshades and citrus fruits are usually considered healthy. They are whole foods from the Earth that are packed with nutrients, right?

But here’s the thing… if your child has a citrus food allergy or is sensitive to nightshade vegetables like potatoes, tomatoes or peppers – it’s definitely not a good idea to eat them. The inflammation that happens as a result will eventually lead to health issues – including typical ADHD-like behaviors.

Every day many of us, including our kids, just deal with those common ailments from food allergies.

We have things like dry skin, canker sores, nausea, headaches, diarrhea, constipation, eczema, ear infections, seasonal allergies and asthma, and we think it’s just a normal part of life. But, none of these issues are normal at all. In fact, they are simply our first clues that something’s not right on the inside.

Most often, if our issue isn’t caused by anÂ inflammation imbalance from food allergies, it can be as a result of yeast overgrowth, an unhealthy gut flora, high toxicity levels, nutrient deficiencies or any combination of these.
{{Privy:Embed campaign=442441}}

Most conventional doctors have been trained toÂ label the symptoms and treat them with some sort of medication. But this does nothing for the root cause. And most often it doesn’t do a whole lot of good for the symptoms either. Plus –Â the side effects are just ridiculous.

These days our kids are prescribed drugs when specific nutrients are all they need! It just so happens, ADHD behaviors mimic the symptoms of some major vitamin, mineral, antioxidant and essential fatty acid deficiencies.

Could your child be suffering from something so simple?

is one of the most common in people with ADHD.

One Polish study found that 95% of the children they were testing with ADHD were deficient in magnesium. Those with lower levels of the mineral, showed more severe symptoms of hyperactivity. After supplementing with 200mg of magnesium for six months, hyperactivity was reduced significantly. The behavior of those who didn’t receive magnesium worsened.

You may want to consider feeding your child more magnesium rich foods like pumpkin/sunflower seeds or cashews and almonds. You could also try giving him a children’sÂ magnesium supplement.Â In many studies,Â vitamin B6Â was needed along with magnesium to see improvement in ADHD symptoms. 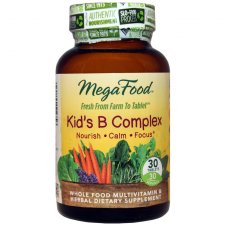 A kid’s mental and emotional state are critically dependent on vitamin B in the diet.

B vitamins, especially B6 and B12, are vital to the development of the nervous system and the productionÂ of neurotransmitters in the brain. TheyÂ are also responsible for blood sugar regulation. And we all know the negatives effects sugar seems to have on our kiddos.

Symptoms of Vitamin B deficiency include forgetfulness, short attention span, irritability, confusion and rage.Â Again, all very similar to ADHD symptoms. All other B-Complex vitamins have important jobs to do too – including improving the absorption of other nutrients into the body. Eat things like fish, beans, spinach, asparagus, broccoli and bell peppers. Â My boys love snacking on those sweet mini peppers.

Sometimes we’re so quick to offer a PB & J, chicken nuggets or a hot dog because they are socially accepted as “kid-friendly” foods, but we have to give our kids a chance! I promise you they will like things you never would have expected.

I was so surprised when I discovered my boys like hummus. A lot. They will eat a whole container of it if I let them! Thankfully hummus has three important B vitamins.

You could also consider adding aÂ B-complex supplementÂ to your kid’s diet. 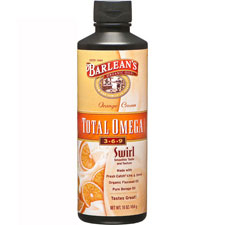 I explain in more depth about our typical essential fatty acid (EFA) imbalance in my article about Essential Fatty Acid Deficiency – Effects, Symptoms & Sources of Omega-3’s.

To sum it up, almost all of us are deficient in Omega-3’s and don’t have a proper Omega-3-6-9 ratio. This imbalance leads to all sorts health issues – ADHD included.

Plus, the conversion of essential fats into DHA, AA and EPA can be inhibited by certain foods like wheat and dairy. The conversion is also blocked by other vitamin and mineral deficiencies like B, C, Zinc and Magnesium.

Research from Purdue University discovered that kids with ADHD are not getting an adequate amount of nutrients required for essential fatty acid conversion and as a result have low levels of EPA, DHA and AA. Omega-3 and Omega-6 or GLA supplementation helped reduce ADHD symptoms. Other research studies have also confirmed this fact.

My boys loveÂ Barlean’s Orange Cream Omega Swirl – they take it straight from the spoon. It tastes like an orange dreamsicle! Total Omega combines a healthy ratio of all the essential fatty acids necessary for optimal health in just 2 teaspoons a day. 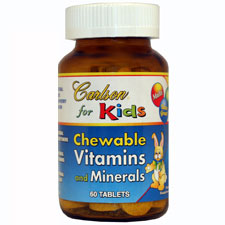 Maybe your child eats plenty of foods rich in zinc – like spinach, seafood, nuts and beans. But, sometimes nutrients getÂ wiped out by other things. Especially processed foods, white breads refined sugar and even many medications – like antibiotics.

Dr. Neil Ward discovered an interesting fact about the disruptive effect of antibiotics on kids with ADHD.

Ward found that antibiotics notÂ only wipe out beneficial bacteria in the gut, they also impair the absorption of nutrients. Most kids Dr. Ward studied who were labeled with ADHD, had several antibiotics in their early years. After much research, heÂ proved that kids who had taken at least three doses of antibiotics before the age of three had much lower levels of zinc, calcium, chromium and selenium.

A zinc imbalance can interfere with proper neurotransmitter function in the brain. Especially the pathways in the brain that affect our behavior. Dr. Mercola says that “Adding zinc to the diets of teenagers has even been shown to cause improvements in memory and attention span.”

You can learn more about zinc deficiency in this Symptoms of Zinc Deficiency article and infographic.

Carlson’s Chewable Vitamins & Minerals is a tasty way to supplement 13 vitamins and 9 minerals into your child’s diet. 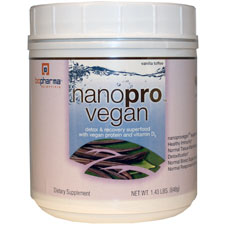 Unless you’re a chemistry buff and know everything about the central nervous system, this stuff can get a bit confusing.

But in general, neurotransmitters in the brain depend largely on amino acids from proteins. All 20 amino acids have an important job to do.

These amino acids have been specifically linked to our mood and behaviors. Without them, or without enough of them, we will experience irritability, depression, nervousness, anxiety, inability to focus, impulsiveness, hyperactivity, etc.

Yet again – these are all very similar to symptoms of kids labeled with ADHD.

Each and every vitamin, mineral, antioxidant, amino acid and fatty acid from our food,Â needs and depends on one another to do a list of jobs to keep our bodies working well.

Homeopath, Beth Landau-Halpern, does a great job of highlighting some amino acids that have an effect on ADHD symptoms.

BioPharma’s Nanopro Vegan is a great way to get all amino acids and vitamin D3 into your diet. Children under 12 years only need a half serving. 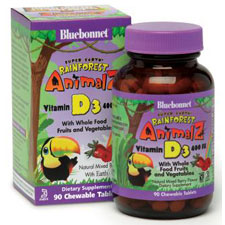 The Vitamin D Council estimates 9 out of 10 people are deficient in vitamin D. It’s a very important nutrient that we rarely can get from food.

Just like plants, it’s the sunlight we need. And good luck if you live in the northern part of the US like all of us at Natural Healthy Concepts.

Vitamin D helps boost the antioxidants responsible for good brain health. It also produces dopamine and norepinephrine in the brain, which is what many ADHD meds aim to do.

Vitamin D helps produce enzymes in charge of making brain chemicals necessary for our ability to focus. Especially for long periods of time.

So although Vitamin D deficiency may not be the one reason you child has ADHD symptoms, it may definitely be a factor, and is very common in children who have been labeled with this disorder. But usually when there’s one deficiency – there’s more.

Bluebonnet’s Animalz D3 supplement is made from whole food fruit and vegetables. They are mixed-berry flavored and offer 400IU of D3 in just one chewable.

Garbage In = Garbage Out!

Nutrients from food are way underrated. They should be the main reason we eat food.

But we eat food because we are hungry. Not because we want to prevent disease.

We have to start thinking of our food as a tool for our health and well-being, instead of the entertainment at the party. We need greens, fruits, veggies, beans, nuts, seeds, fish, herbs, spices, healthy fats and a limited amount of organic grass fed meat and poultry. If everyone was loyal to a diet like this, we’d have far fewer cases of common health issues – ADHD included.

It’s cool to treat your taste buds once in a while. But most of the time, taste is just a bonus.Â Functional medicine is key. These doctors know the power lies in food and nutrition.

The bestÂ thing you can do today, is find a functional medicine practitioner, where you live, who can determine if your child has any nutritional imbalances or food allergies.Â A blood test will check 80+ different foods, or an elimination diet could also be done to determine sensitivities.

Doctors like Joel Fuhrman and Mark Flannery will help you prevent disease. They can even cure your child of many different health issues they’ve been labeled with.

Mark HymanÂ is a great example of a doctor who hasÂ cured many children of ADHD, and even autism, by focusing on a healthy anti-inflammatory diet and healthy gut flora, removing toxins, identifying food sensitivities and bringing their nutrient levels up to where they need to be.

Check out this clip of how Dr. Hyman cured one child of his ADHD symptoms.

Also check out these articles on ADHD.

Don’t forget to subscribe to the blog and newsletter at the top right of the homepage and Like Natural Healthy Concepts on Facebook for more natural health tidbits.