You are here: Home › Our Blog › What Are Adaptogens and How Can They Support My Health?
By Jackie Peters on August 22, 2016 in Health Challenges, Health Tips, Nutrition Supplements 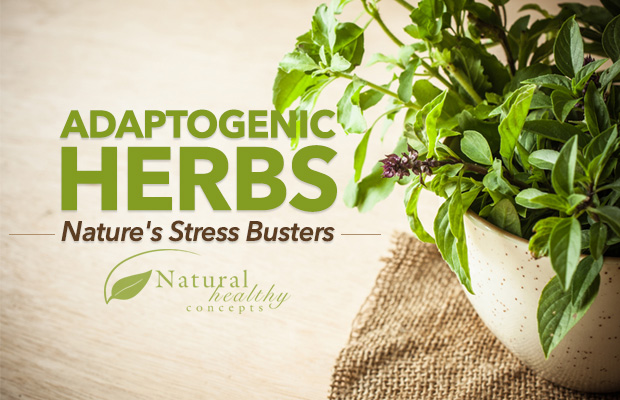 Do you feel stressed, anxious and tired a majority of the time? This state of chronic “distress” has become common for people today. It seems that with hectic schedules, there’s no time to eat well, exercise regularly or sleep enough, and it’s taking a toll!

The Centers for Disease Control and Prevention estimates that stress accounts for about 75-90% of all doctor visits.Â This is based on a wide range of physical complaints, such as headache, upset stomach, tiredness, back pain, ulcers, heart problems, sleep issues and accidents.

In his book, Unhealthy Work, Peter Schnall refers to our stress-filled societal situation as “an invisible, $1 trillion health epidemic.” That’s because persistent stress can make us sick!

Stress is considered negative as it extends past our ability to cope, tires our bodily systems and causes physical as well as behavioral problems. This is the result of the body’s normal response to distress, best known as the “fight or flight” survival mechanism.

In a nutshell, when we are faced with a stressor, the adrenal glands secrete the hormone cortisol. It works in the body by loading it with glucose, which is an immediate energy source for our muscles, and by slowingÂ the production of insulin in order to encourage glucose’sÂ immediate use instead of storage. Cortisol also narrows our arteries, while another hormone, epinephrine, increases heart rate. When the issue is resolved, the hormone levels return to their normal state.

With constant low-grade stressors, cortisol is steadily released in our body. Without enough physical exertion, it builds up. Over time, this can be dangerous to your health.

When your adrenal system stays active continually, not only do your adrenal glands get worn out, but your body also gets out of balance. This can result in immune suppression, hormone imbalance, poor concentration, digestion issues, inflammation, histamine release, weight gain, forgetfulness, mood issues, plaque buildup in the arteries, sub-par performance, blood sugar control issues and even premature aging.

Bring Your Body Back into Balance with Adaptogens

Many adaptogens were originally used in traditional Chinese and Indian medicine, when they were referred to as tonics, or balancing tonics. People recognized that plants have the ability to “adapt” to harsh growing conditions and weather conditions as a survival instinct of sorts. The thought is that if plants can withstand stress, their DNA may work to make us humans more resilient and adaptable.

Adaptogenic herbs were first studied by the Soviets in the later 1940s.Â Dr. Nikolai Lazarev first coined the term after his in-depth study of eleuthero, while his successors, Dr. Isreal Brekhman and Dr. I. V. Dardymov, actually defined exactly what they were.

Adaptogens are plants, or herbs, with three characteristics:

While each herb has its own unique properties, they all share these characteristics. It is believed that adaptogensÂ work by normalizing cortisol levels and supporting the adrenal glands, which then neutralizes the effects of stress. TheyÂ increase immunity by improving the overall ability of the entire body to take on challenging and stressful situations.

Interestingly, adaptogens have the ability to calm you while also supportingÂ your energy levels, leaving you not overstimulated andÂ not drained.

The Benefits of Adaptogens

Beyond their stress-relieving action, which seems to work through the normalization of stress hormone production (CRH, ACTH), The School of Modern Herbal Medicine shares these potential benefits.Â They support:

These potential benefits mainly stem from the adaptogens’ ability to normalize our bodily systems.

Let’s take a look at 10 of the most recognized adaptogens. Since each of these herbs has different effects, it is a good idea to get expert guidance from an herbalist or functional medicine provider before use.

Ashwagandha root has ties to ayurveda. It is believed to have the strongest effect on cortisol. In addition to offsetting the impact of stress, ashwagandha is known for supporting energy, vitality, stamina, immunity, adrenal and thyroid function, strength, sleep, calm and a sharp mind. Ashwagandha is a calming adaptogen.

Asian ginseng root is regarded as the “longevity herb” in traditional Chinese medicine (TCM). In addition to neutralizing the effects of stress, it is believed to positively influence cellular metabolism, the immune system, normal cell growth, mental clarity, endurance, vitality, mood, sleep, and cognitive and sexual function. Asian ginseng is a stimulating adaptogen.

Astragalus root, used in TCM, is known toÂ fight stress and support good health. It works to support energy and the immune system. One of its compounds, TAT2, supports healthy aging, detoxification and kidney health. Its polysaccharides and saponins are thought to support heart health and function.

Eleuthero root has ties to TCM. In addition to its ability to counteract stress, eleuthero is believed to support the overall feeling of well-being, energy, immunity, alertness, endurance, stamina and performance. It is a stimulant adaptogen.

Maca root has ties to theÂ Incans, who used it to support energy and stamina. It is believed to support endocrine health and mood, along with its stress-busting properties. It is a stimulating adaptogen.Â Read more about maca here.

Rhodiola root, based in TCM, is believed to support balanced cortisol and energy levels, healthy immune function, alertness, mental clarity, memory, production and stamina. It is a stimulating adaptogen.Â

Rosemary leaf has been used in TCM for centuries to relieve stress. It is valued for its active compounds, caffeic acid and rosmarinic acid. Rosemary is believed to support healthy digestion, cardiovascular function, liver health, memory, brain health and circulation.

Schisandra fruit isÂ used in TCM to harmonize the body and to help retain energy. It is know for its ability to balance the entire body. It works to support good health,Â antioxidant activity, circulation, heart health, healthy digestion, nervous system balance and liver health. It has both excitatory and inhibitory action.

Always consult your healthcare provider before using any herbal products, especially if you have a medical issue. They are not recommended for women who are pregnant or lactating.

Have you found adaptogenic herbs to be beneficial? Share your story below in the comments!