You are here: Home › Our Blog › 9 Ways to Maintain Your Health When You Have MS
By Theresa Groskopp, CN on August 19, 2014 in Health Tips, Nutrition Supplements 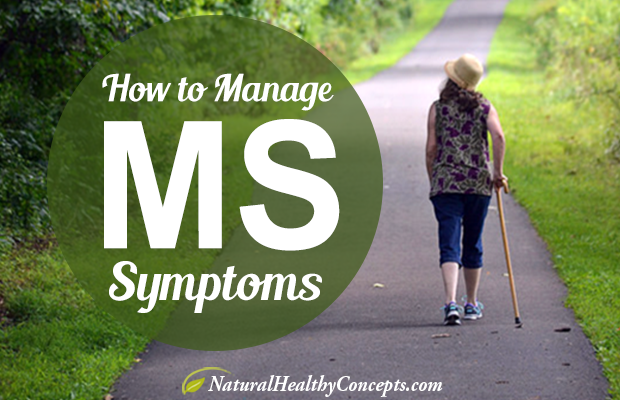 Multiple Sclerosis , commonly referred to as MS, is one of the most widespread disabling neurological conditions among people between the ages of 20 and 55. While most diagnoses seem to come between the ages of 30 and 35, diagnoses do fall outside of that range. While people typically experience relapsing or remitting MS, there’s really no ability to predict the course of how any one person’s course will progress.

It’s been estimated that somewhere around 2.5 million people around the globe suffer from MS, with an estimated 400,000 being in the United States alone. According to Healthline, the rate of people being diagnosed or suffering from MS is twice as high in the northern states than in the southern states, and the rate is also higher in states that typically have colder climates.

Symptoms may include fatigue, vision problems, tingling in the extremities, balance issues, bladder troubles, and even depression.

There’s no known cure for MS, but there are plenty of medications to help lessen the frequency and severity of relapses, and to help slow the overall progression of the disease. The FDA has approved 10 such medications, and while these may work for many people, they also come with plenty of undesirable side effects.

The list is includes blood problems, seizures, thyroid problems, and liver troubles, and these are just a few effects that are possible. For a number of people, these side effects sometimes end up outweighing the benefits of the medications, leaving many to look for a way to escape and find alternatives.

The good news is that many exist.

Herbal Ways That May Help Maintain Your Health

There are a number of natural herbs and minerals that may provideÂ properties to help better manage the symptoms of MS and support your overall health.

The list of natural supplements that may benefit people with MS is quite long, but there are a few that have become quite popular.

1.)Â Vitamin D: A 2013 study that appeared in EPMA Journal suggests that there’s a “strong connection between the development and progression of MS and a person’s vitamin D levels.” Vitamin D plays vital roles in the health and performance of muscles, nerves, and the immune system, all of which are affected by MS.

2.)Â Vitamins B1, B6, and B12: Vitamin B1 (also known as Thiamine) is important for optimal brain, heart, muscle, and nerve function. According to a 2011 study that appeared in Neurochemistry International, “B1 deficiencies are related to a number of neurodegenerative conditions, including MS, and can also cause fatigue and muscle weakness.” Vitamin B1 can be found in foods like nuts, seeds, lean meats, eggs, and whole grains. Vitamin B6 is found in foods like fish and starchy vegetables, and is important for proper metabolism. B6 deficiencies are common in people with autoimmune disorders like MS, and, according to a 2011 fact sheet from the Office of Dietary Supplements at the National Institutes of Health, “B6 deficiency can be associated with abnormal brain function, depression, confusion, and kidney problems.” Â Vitamin B12 is responsible for the healthy function of red blood and nerve cells, healthy brain function, and more. According to a 2012 study in BMC Medicine and a 2011 study in the Journal of Clinical Neuroscience, “people with MS may be more likely to develop a B12 deficiency, which can lead to weakness, weight loss, balance problems, numbness and tingling, memory issues, and nerve damage.” Vitamin B12 supplementation may help counteract these symptoms of deficiency.

3.)Â Zinc: Zinc plays a vital role in the health of the immune system, as well as eye health. In a 2009 study in Nutrition Journal, researchers found that “many people with multiple sclerosis may have a low intake of zinc.” Regular zinc supplementation may help address vision troubles. Zinc can be found in foods like spinach pumpkin seeds, seafood, and cashews.

4.)Â Calcium: It’s no secret that calcium is crucial to optimal overall health. Calcium supplementation is a good idea for everyone, and plays a role in bone and cardiovascular health. People with MS can benefit, but should know that vitamin D increases the body’s absorption of calcium. For MS sufferers, calcium supplements should always be used with caution.

5.)Â Magnesium: Magnesium plays a role in over 300 reactions in the human body. Deficiencies are very common and can cause weakness, fatigue, tingling and numbness, personality changes, and even seizures. According to a 2012 fact sheet from the National Institutes of Health, “magnesium supplements and a diet containing natural sources of magnesium may be useful for preventing a deficiency that could aggravate symptoms of MS.”

8.)Â Chamomile: “Chamomile possesses antioxidant and antibacterial properties,” according to a 2013 study Food Chemistry, and a 2012 study in Bratislava Medical Journal. These proeprties may be helpful to people with MS.

9.)Â Coenzyme Q10: Coenzyme Q10 (also known as CoQ10) has the potential to slow the progression of degenerative diseases. It’s tolerated well by people with MS and studies have shown small positive effects.

Are you using any of these supplements to help with MS symptoms? Do you have others to recommend? Please leave us a comment below and let us know what’s been working for you!

How Smiling More Can Change Your Life
Workout Wednesday Round-Up, What Do You Want?