You are here: Home › Our Blog › 7 Delicious Ways to Enjoy Eggplant Season
By Theresa Groskopp, CN on August 14, 2015 in Healthy Recipes 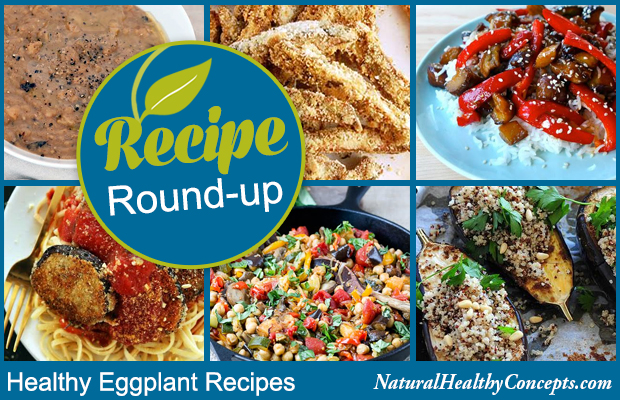 It’s officially eggplant season, people. That funny-looking purple vegetable is at its best from August through October, and with a taste as unique as the one eggplant offers, why would you want to miss out?

We’ve rounded up some great-tasting and vastly different ways to enjoy eggplant while it’s in season. Let’s take a look!

Eggplants live in the same family as tomatoes and potatoes (the nightshade family), and also grow on vines. Taste depends on the variety of eggplant, but it’s generally described as having a slightly bitter taste with a spongy texture.

According to The World’s Healthiest Foods, one cup of cubed, cooked eggplant offers the following amounts of the daily recommended value of these nutrients:

Eggplant is also packed with phytonutrients and phenolic compounds like flavonoids, chlorogenic acid, and more. The nutrient powerhouse that is the eggplant provides benefits for brain health and function, delivers powerful antioxidant protection against free radicals, and promotes cardiovascular health.

Now that we know how eggplant can benefit your health, let’s get on to theÂ reallyÂ good stuffâ€”the recipes! 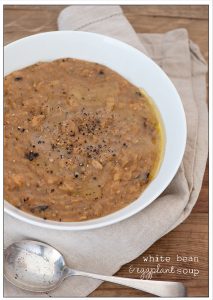 I’m a huge fan of soup. Summer, winter, every day in between…they’re all great times for a bowl of hearty soup, and that’s why I’m starting with this great recipe from Jules over at StoneSoup.

Fairly simple to put together, this white bean and eggplant soup is “rich and warming, almost meaty in a way,” according to Jules. With only five ingredients, it’s even a great choice for when you’re running short on time.

Who knew roasted eggplant could be so delicious and filling in a soup?

Get the full recipe from StoneSoup here.

Chinese food is a staple for quite a few people. Unfortunately, it isn’t always 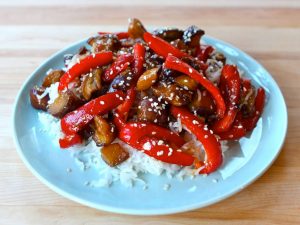 the healthiest choice, especially when it’s from a buffet. Tori Avey puts a healthy, eggplant-based twist on the ever-popular sweet and sour dishes with her sweet and sour eggplant recipe.

Discovered at a Chinese restaurant Tori and her husband stumbled upon while in London and then perfected after three tries at home, this recipe is “healthy and really simple to make,” Tori says.

Made with cubed eggplant, sliced bell peppers, and a delicious sweet and sour sauce that has a hint of brown sugar, peanut oil, and cayenne pepper (which is optional if you don’t like extra spice), it’s the perfect light dinner when served over rice. It’s even great as a complement to a much larger meal!

Get the full recipe from Tori Avey here. 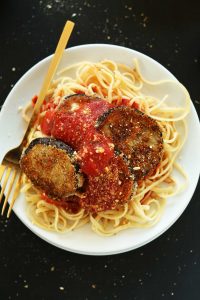 After a busy day at work, it can be pretty hard to talk yourself into making a healthy meal for your family. This recipe from Dana and John over at Minimalist Baker is just the recipe you need to keep things healthy in a short amount of time.

Ready to serve in about an hour, this vegan eggplant parmesan is easy to make and only calls for 10 ingredients. Saucy, delicious, and healthy, it’s a filling dinner option that even your pickiest eaters will absolutely love.

The eggplant delivers a satisfying crunch and delicious flavor when paired with your favorite red sauce. Set it on a bed of your favorite pasta, and you’ll have a dish that quickly becomes a favorite.

Get the full recipes from Minimalist Baker here.

If you have kids, you know how much they can absolutely love french fries. 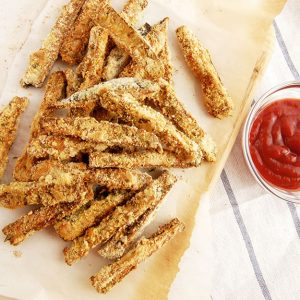 I love them, too, but if you’re trying to steer your kids away from the greasiness of french fries (especially the fast food varietyâ€”yikes!), then this recipe from Paleo Grubs should be right up your alley.

Get the full recipe from Paleo Grubs here. 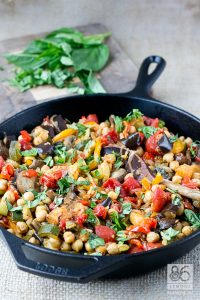 If you’re a fan of recipes that allow for numerous variations, you’ll love this one from Livvy at 86Lemons. Vegan, gluten-free, and absolutely delicious, this ratatouille recipe is a bit out of the ordinary when it comes to the super healthy ingredients.

The chickpeas and chunky eggplant offer a beautiful mix of flavors, but when you toss in the rest of the vegetables, you have a dish that is hearty, satisfying, and very rich in flavor. It’s colorful, too! According to Livvy,”each serving boasts 15 grams of protein and 18 grams of fiber.” How’s that for healthy?

Get the full recipe from 86Lemons here.

Bolognese is one of my favorite Italian dishes. It’s hearty, filling, and is the 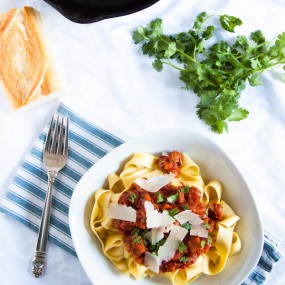 perfect comfort food. This recipe from Greatist is a healthier twist on the old favorite, and you’re sure to love it.

The typical bolognese sauce calls for loads and loads of meat. However, if you’re vegan, vegetarian, or are just looking to make a healthier dish for your family, eggplant serves as a wonderful replacement for all that meat.

Want an even healthier dish? Ditch the starch-filled pasta and use quinoa or farrow. Zucchini noodles would be a perfect pairing as well!

Get the full recipe from Greatist here. 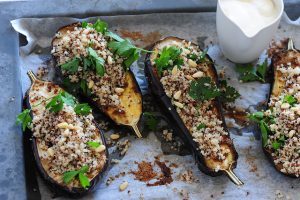 I absolutely love stuffed vegetable recipes (though, the eggplant is actually a fruit, much like a tomato…). I’ve stuffed everything from peppers and zucchini to eggplant and even squash. There’s really nothing like adding some extra zing to a vegetable that’s already delicious, and that’s why you’re seeing this second recipe from StoneSoup.

Halve and bake your eggplant for 40 minutes until it’s very soft. While it’s baking, you’ll prepare a mix of quinoa and parsley to use as a stuffing. However, you can switch ingredients and spice in and out if you’re looking for a specific flavor. When the eggplant is tender, simply fill each half with the quinoa mixture and then drizzle with yogurt (and any other of your favorite sauces). Yum!

Get the full recipe from StoneSoup here.

How do you prepare your eggplant? Let us know by sharing a recipe or comment below!

If you like our posts, don’t forget to enter your email in the box below to get each new post right in your email!

Workout Wednesday: Is Your Protein Shake Good for You?
Should You Get a Tattoo? Pros & Cons to Consider