You are here: Home › Our Blog › 5 Exotic Super Fruits for a Healthy Diet
By Theresa Groskopp, CN on November 2, 2018 in Diet, Nutrition Supplements 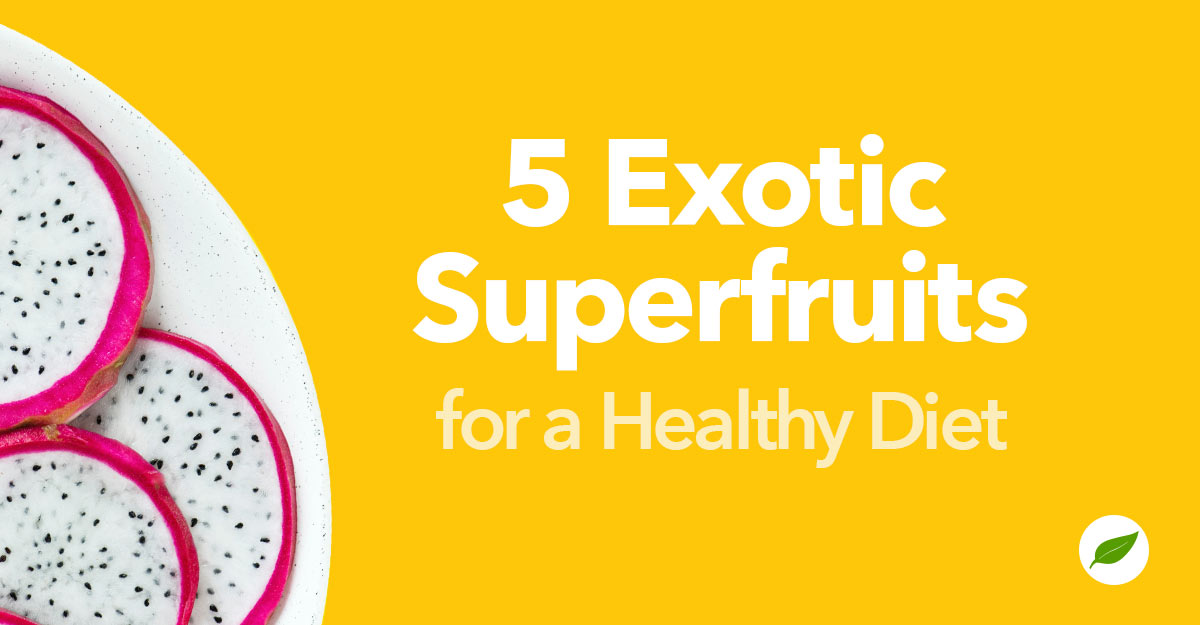 Apples, oranges, bananas and strawberries. We all love them, and they provide some amazing benefits to our health. Ever feel like trying something new though? There are so many exotic â€œsuperâ€ fruits out there that youâ€™ve probably never even heard of. Best of all, not only are they delicious, some of the contain some mind-blowing health perks.

What is a Super Fruit?

Exotic super fruits are defined as any fruit that contains remarkable health benefits. Some of the best know super fruits are acai berries and pomegranate. But why limit your choices? Letâ€™s take a look at some of the other choices at there that youâ€™ve probably never even heard of!

Triphala fruit is a super fruit from southeast Asia and has been a staple of Ayurvedic medicine for centuries. Due to its high antioxidant content, its medicinal uses range from digestive issues to tooth decay. Hereâ€™s the interesting thing though, triphala actually refers to a recipe, which is a blend three exotic super fruits from different plants. Alone, the plants are mildly beneficial, but mixed together they create a powerful formula for potential disease prevention and overall optimal health support.

How to eat triphala: Since triphala is a blend of fruits, many find it easier to take it as a supplement. Try these capsules from the brand, Himalaya.

Itâ€™s called a super fruit, but bitter melon is actually more like a gourd that grows on a tropical vine often found in Asia, parts of Africa and the Caribbean. It is a highly regarded as a support for endocrine disorders as it contains a chemical that mimics insulin and naturally supports healthy blood sugar levels. Itâ€™s also used to help regulate menstruation, and soothe stomach and intestinal issues.

How to eat bitter melon: Because of its bitter taste, itâ€™s usually eaten raw, instead you can often find it used in Asian cooking recipes. If thatâ€™s not your thing, try it as a supplement.

Watch out for this one, itâ€™s a stinker! This exotic super fruit is known for its pungent smell. Itâ€™s not much to look at either, the outer shell is about the size of a cantaloupe and is green and spiky.Â  So why the heck would you want to eat it? Well, itâ€™s a good source of antioxidants and vitamin C, and is rich in dietary fiber and healthy fats. Itâ€™s also a great source of B vitamins, including riboflavin, niacin and thiamin. So, what do you think, could your brave the stench for the benefit of your health?Â

How to eat durian: Despite itâ€™s smell, the fleshy fruit of the durian is actually sweet and is often found included in dessert recipes, and even ice cream!

This tropical super fruit has become quite popular in recent years for itâ€™s sweet taste that is often compared to a kiwi or pear. Itâ€™s good for you too! Dragon fruit contains protein, and is an excellent source of vitamin C and iron. Itâ€™s also low in calories which helps support your waistline!

How to eat dragon fruit: Because itâ€™s sweet, itâ€™s often eaten raw or combined with other fruit to make a fruit salad.

This exotic super fruit from Thailand is tangy and sweet, but youâ€™ll have to work to get it. The white flesh of the fruit is tightly locked away by a tough outer shell that you have to break through to reach. Itâ€™s worth it though, the mangosteen is packed with antioxidants and is a big support for optimal heart health. Besides that, itâ€™s also highly regarded for its effects on the appearance of skin. As a natural anti-inflammatory, mangosteen is often used to target redness and irritations on the skin, leaving it smooth and soft to the touch.

How to eat mangosteen: Most people eat the center of this fruit raw because of its sweet and tangy flavor. Just use a sharp paring knife to cut through the tough outer shell.

Whatâ€™s your favorite exotic super fruit? Are there any of these that youâ€™d like to try? Let us know what you think in the comments below!