You are here: Home › Our Blog › 3 Shatavari Benefits Evaluated By Science
By Theresa Groskopp, CN on February 15, 2018 in Diet, Nutrition Supplements 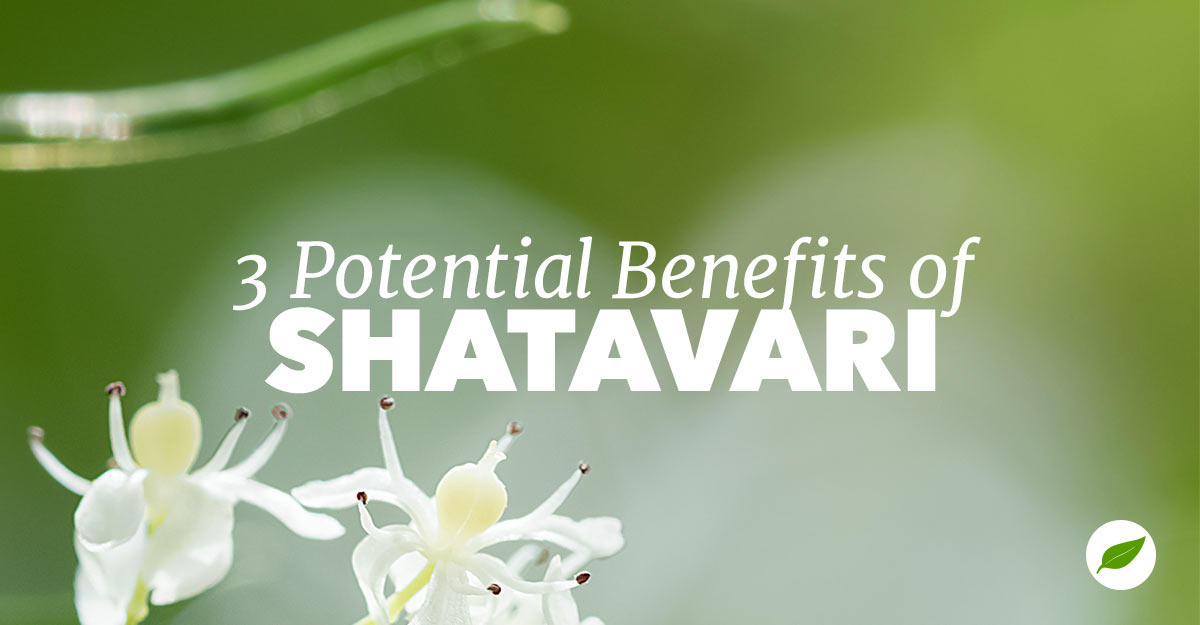 The modern world has a curious relationship with the medicines of antiquity. Many Westerners want to learn from ancient health traditions but feel that they have no personal attachment to this exotic way of life.

One might imagine an ancient bearded practitioner of Indian Ayurveda, radiating with a light of inner vitality. But for an American who grew up on TV dinners, this picture of healthy living might seem remote. Is personal wellness based on nature and wisdom even possible anymore?

This is the sort of question that comes to mind when evaluating a traditional medicinal plant like shatavari. Shatavari is a kind of asparagus that flourishes in Southeast Asia. Due to its prevalence and apparent usefulness, shatavari was taken up in various Eastern traditions such as Ayurveda, with which it is typically associated. Keep reading to learn more about shatavari.

Cultivation of shatavari root remains pervasive, as does its reputation as a general purpose tonic. The word â€œshatavariâ€ roughly translates in some Indian dialects to â€œcurer of one hundred diseasesâ€. But do shatavari benefits seem as impressive according to science? Thatâ€™s what science has set out to learn. Some studies have evaluated the potential of shatavari benefits. In some cases, science seems to agree with tradition, though it remains necessary to consider each use case individually. Here are three.

Shatavari root is perhaps most well-associated with breast milk production. In scientific terms, this ancient asparagus appears to be a â€œgalactagogueâ€ â€“ a lactation aid (even though it sounds like something from Star Wars). One double-blind study found that shatavari may offer benefit to prolactin production.

Prolactin is reputed to play an important role in milk production levels in all mammals, including humans. It seems that even though this specific mechanism of action was not understood in ancient times, Ayurvedic medicine has discovered some apparent shatavari benefits for nursing mothers and their babies.

It is important to note that science suggests links between prolactin and other beneficial body processes, including maintenance of the immune system, metabolism and pancreatic development. These effects may or may not be driving forces in the other potential benefits listed here.

Many of the active immune system cells are produced in the bodyâ€™s bone marrow. Because the source of important members of the cellular immune system can be observed, different lifestyle factors can be evaluated for their effect thereupon.

One study suggests that killer T cell production may be supported by shatavari. In fact, the change in t-cell population appeared to change in proportion to the dose taken by the studyâ€™s subjects.

Indigestion (or â€œdyspepsiaâ€) is a common complaint from people all around the world. As such, it is no surprise that ancient traditions like Ayurveda addressed it, and tended to prescribe certain tonics. Judging from traditional texts, shatavari root was one of the plants most commonly recommended for this problem. But does this reputation seem to be well-founded in the light of modern science?

In fact, scientific study suggests the same potential for shatavari. One such study seems to validate shatavari rootâ€™s reputation as a digestive aid and anti-ulcer plant. Furthermore, this studyâ€™s findings are far from unique, with other studies reaffirming these scientific findings. Â While it is not our place to say that any individual supplement will have a specific result, the science seems optimistic of the role shatavari may play in digestive health.

At the end of the day, shatavari is revered among Ayurvedic practitioners as well as people well outside this tradition. As science and tradition imply, shatavari root may offer benefits to some bodily processes. Its traditional applications may be taking root in the modern world. Â

Benfotiamine Dosage: Why Vitamin B1 Matters
What is Shatavari Root?