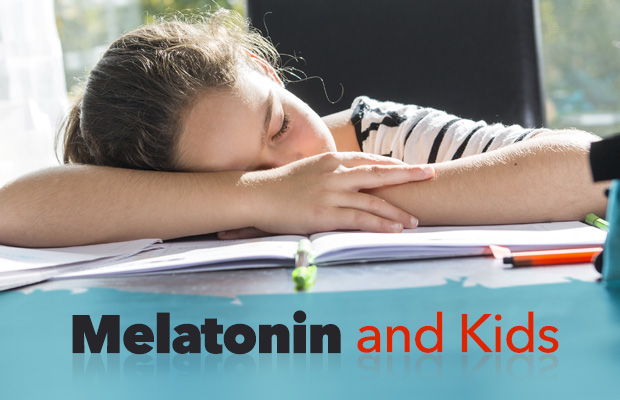 Let’s face itÂ â€” getting the kids to sleep can be an uphill battle sometimes. Getting them to stay asleep may be even more difficult. Just whatÂ do you do when your kids won’t go to sleep?

There are things like warm baths, foot massages and bedtime stories, but a fourth option has been growing in popularity: Melatonin. For some parents, it’s a must; for others, it may be a last resort.

Let’s take a look at both sides of the story.

Melatonin is a hormone made in and secreted by your pineal gland, and is responsible for helping to control your sleep and wake cycles. While this naturally produced hormone is what helps make you sleepy when it gets dark, there are factors that may affect the production of it.

According to an article in the July 2012 issue ofÂ Food & Nutrition Research, “It has been demonstrated that some nutritional factors, such as intake of vegetables, caffeine, and some vitamins and minerals could modify melatonin production” (Source).

Exposure to short-wavelength (blue) light is also a big contributor to disrupted melatonin production. Dr. Anne-Marie Chang (in an interview with Scientific American) states the following:

We have known for quite awhile now that light is the most powerful cue for shifting the phase or resetting the time of the circadian clock. We also know that melatonin is present at low levels during the day, begins being released a few hours before bedtime and peaks in the middle of the night. Past studies have shown that light suppresses melatonin, such that light in the early evening causes a circadian delay, or resets the clock to a later schedule; and light in the early morning causes a circadian advancement, or resets the clock to an earlier schedule.

Given our ever-increasing dependence on cell phones, computers and other electronic devices, this is a pretty important factor to consider. Is your child eating a healthy diet? Is he or she spending too much time on a computer or tablet?

Getting enough sleep every night is important for people of all ages, but may be even more so for children, as they’re still growing and developing.

According to this article from Huffington Post, “Normally, by 8:00 p.m., your melatonin levels start rising. They keep increasing until about 3:00 a.m., when it peaks and your body temperature happens to be at its lowest” (Source). But because we experience so much blue light during nighttime hours, your melatonin levels may begin to rise later than 8:00 p.m. This may very well be the case for kids, too.

It’s quite possible that your child is just experiencing sleep troubles. It happens in kids, just like it happens in adults. Â According to Dr. Craig Canapari:

Use of melatonin results in less difficulty with falling asleep, earlier time of sleep onset and more sleep at night. The initial studies used pretty high doses, but later studies comparing different doses showed that dose didn’t matter, and that the lowest dose study was as effective as the highest.Â This is likely due to the fact that ALL these doses were well above the amount produced naturally in the children. Timing between 6â€“7 PM was more effective than later doses.

While the aforementioned statement may sound promising, it’s always important to take a look at your child’s specific sleep pattern. Healthline offers a short list of situations in which melatonin may be beneficial:

The National Sleep Foundation has no records of melatonin toxicity or overdose in children, but it’s still of the utmost importance to really give a good amount of thought to whether giving your child melatonin is the right thing to do. It’s also a good idea to discuss the idea with your child’s healthcare provider.

And, just like with any supplement or medication, there may be concerns in using melatonin to help your child sleep.

According to Dr. Andrew Weil, “Melatonin and children don’t mix.” He then goes on to offers alternative suggestions for helping to your child overcome sleep issues, such as setting a soothing bedtime routine, discouraging television and computer use before bed, and avoiding any caffeinated beverages. (You can read more about what Dr. Weil has to sayÂ here.)

In an article on the NBC Connecticut website, Dr. Johnson-Arbor, a toxicologist at Hartford Hospital, brought up another point â€” that melatonin is a hormone:

It’s possibly thought to affect growth, to affect sexual development and puberty and a lot of different effects … It is a hormone and it definitely can have these severe interactions that you might not think of just looking at the pill…

Ultimately, the decision whether or not to give your child melatonin is yours to make. Just keep in mind that is it important to consult a healthcare practitioner as well so he or she can help determine the proper dosage for your child. Natural Healthy Concepts carries a wide range of melatonin supplements in capsule, tablet and liquid forms.

Have you used melatonin to help your child sleep? Would you try it? Help us start a conversation by leaving a comment below!

If you enjoy our posts, don’t forget to subscribe below:

5 Reasons to Get a Spiralizer
Seaweed Health Benefits