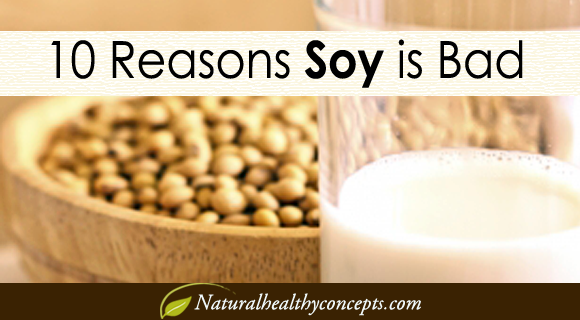 As an official Weston A. Price member, when it comes to soy, Iâ€™m biased in my thinking…

I think 98% of the soy consumed in the US is a serious health hazard.

I know Iâ€™m going to get raked over the coals by some of you, but Iâ€™m no stranger to controversy. Iâ€™ll confess that years ago I also fell for the â€œsoy is goodâ€ dogma when several of my children proved to be lactose intolerant. Everyone was touting the health benefits of soy and I never questioned what they told us.

But before I get into all the reasons to avoid soy, I will say some good things.

Clarification: Fermented soy is good in very small amounts (think as a condiment).

In these articles on fermented soy from GreenMedInfo, youâ€™ll see that fermented soy from foods like natto, miso, tempeh, tamari (the â€œoriginal soy sauceâ€) and fermented bean paste contribute to a number of health benefits like increased bone mineral density, preventing bone loss in â€œovariectomised ratsâ€, and reduced fracture risk. These are all good things.

Even Sara Pope, from the Healthy Home Economist gives fermented soy a little credit in this article, but with a strong word of caution: â€œFermented soy is a nutrient dense food that is a fantastic addition to the diet with one caveat.Â  Fermented soy must be consumed within the context of an iodine rich diet.”

Therefore, if you eat the typical American low-fat diet, which is incredibly devoid of foods containing thyroid protecting iodine, and then suddenly decide to go wild eating fermented soy all the time because you saw something positive about it on the evening news â€“ this could still pose a problem for your thyroid health!

By now you might be thinking, â€œDonâ€™t Asian women eat a lot of soy and have lower breast cancer rates?â€ I once thought so, but I learned in my research that we tend to think of Asians consuming lots of soy, but thatâ€™s not true. Most consume very small amounts every day and that is primarily fermented soy.

Now letâ€™s look at all the reasons you should think twice before grabbing that box of soy milk on your way home from work.

That’s enough to convince me that soy is bad – but if you want more convincing – read the articles below, or better yet, get Dr. Kaayla Daniel’s book The Whole Soy Story. Dr. William Campbell Douglass II, calls it “the most important nutritional book of the decade.”

The Soy industry pays handsomely to convince us all that soy is healthy – don’t let them sell your health to the highest bidder.

If you are a recovering soy user or suffered some ill effects from it, please share your story below.

Healthy Holiday Recipes the Whole Family Will Love
What are the Benefits of Drinking Tea?